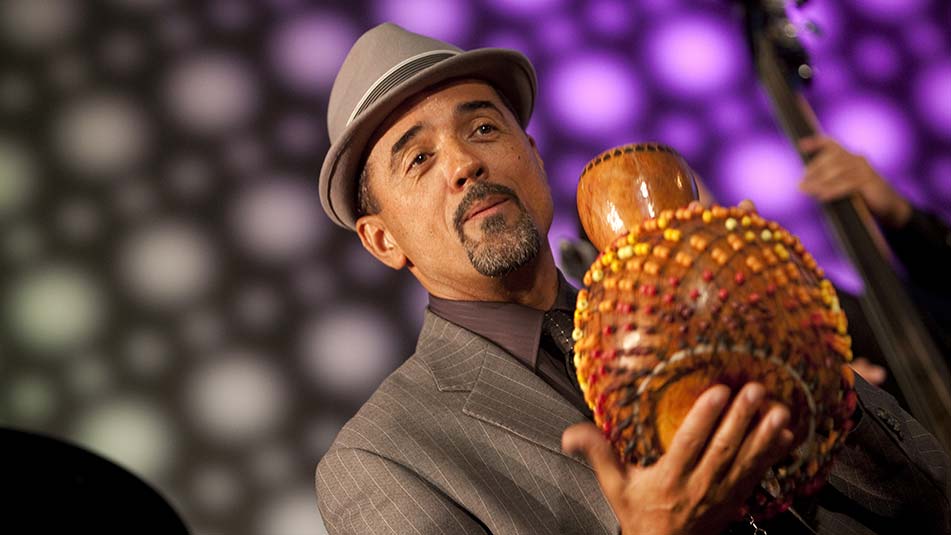 Supporting live arts spaces now is essential, as continuing this into the future work will only be possible with an investment today in our talented and committed community. Please consider a donation to the SFJAZZ Community Campaign today.

There are very few who know SFJAZZ the way seven-time GRAMMY-nominated percussionist John Santos does.

The San Francisco native (born and raised) and current SFJAZZ trustee is one of the most renowned Afro-Latin composers and performers today, and he is also an in-demand scholar and community leader who has influenced much of the Bay Area’s music scene. He was there at the very beginning, performing the first-ever concert the organization produced at the Herbst Theatre in 1983, when SFJAZZ was known as “Jazz in The City.”

“It was a group called Batachanga that I directed at the time, and the current SFJAZZ Director of Education Rebeca Mauleón was the piano player in that group.”

Flash forward 37 years, and Santos is not only intimate with how SFJAZZ has grown over time, but also how it offers artists such as himself a world-class venue to play in, and the freedom to stretch out creatively, as both performers and presenters. 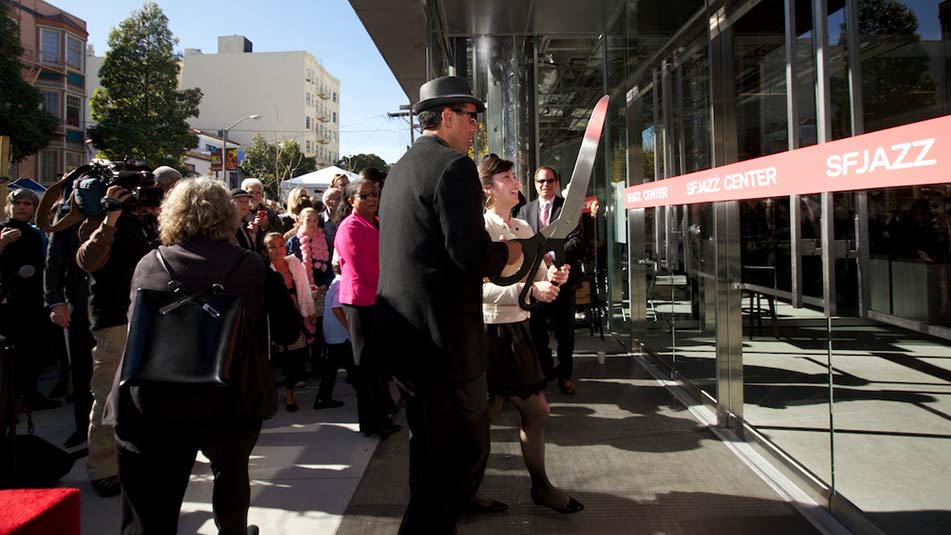 John Santos at the ribbon cutting ceremony for the opening of the SFJAZZ Center in 2013.

Supporters of SFJAZZ frequently say that the range of programming is a huge attraction, and in his various roles throughout the years, Santos has helped to present an imaginative mix of acts.

As one of the first Resident Artistic Directors (RADs) in 2013-14, Santos was able to bring artists to the SFJAZZ Center from cultures outside of Latin and Afro-Cuban music, and simultaneously bring new sounds and experiences to SFJAZZ concert-goers.

“I have nothing but gratitude for the opportunity to present several profound collaborations with known, and more importantly, artists unknown to the general SFJAZZ audiences – a very eclectic mix with Taiko Drumming from Japan, a percussionist from India, and many more artists – including spoken word artists – SFJAZZ allows us to present collaborations we otherwise wouldn’t have the chance to do.”

Santos also credits his residency with giving him the opportunity to collaborate with artists including with Joe Henderson, Steve Turre, Bobby Hutcherson, Walfredo del los Reyes, and Paquito D’Rivera, as well as his fellow RADs from that year: Regina Carter, Bill Frisell, Jason Moran, and Miguel Zenón.

As an artist and performer, Santos says that what makes SFJAZZ stand out as an organization is how it’s firing on all cylinders creatively and professionally – and he credits the staff.

“I think it is interesting, to try to think of [just] one quality that stands out with SFJAZZ because to me, it’s the fact that there’s an uncanny balance – equal love that’s been given to the programming, the actual sound in the room, educational activities, and also the branding. And to me, it’s done with equal expertise and equal love – not just one of those things, but the fact that they are all strong.”

Santos says that with all these strengths combined, the people on the ground at SFJAZZ are attracting enthusiastic, supportive and informed audiences to interact with. “And the audience makes all the difference in the world,” he says. “How the membership has grown in the last few years since the building was opened, I think really reflects all that.”

Your Support Means More Now Than Ever

With the 2020-21 Season canceled due to the pandemic, Santos says that supporting live arts spaces now is an essential step in ensuring that artists have venues to play once they are touring again and audiences are ready to return.

“SFJAZZ is something that is really crucial for us to support, now more than ever, with live arts threatened and taking a terrible blow. Vital arts organizations like SFJAZZ provide an antidote to destructive automated social norms that are increasing at a terrifying rate,” he says.

“SFJAZZ is perhaps the premier institution in the world defending and honoring our national art form with love and class, for all generations. Unfortunately, the system in which we live does not provide a safety net, so the onus falls on the generosity of patrons and supporters who understand and appreciate the urgent work and artistic expression that happen at SFJAZZ.”

“SFJAZZ has earned international respect through nearly four decades of quality presenting – that’s quite a legacy,” Santos says. “Thank you to those who have made SFJAZZ a success and who continue to support the organization.”

Supporting live arts spaces now is essential, as continuing this into the future work will only be possible with an investment today in our talented and committed community. Please consider a donation to the SFJAZZ Community Campaign today.