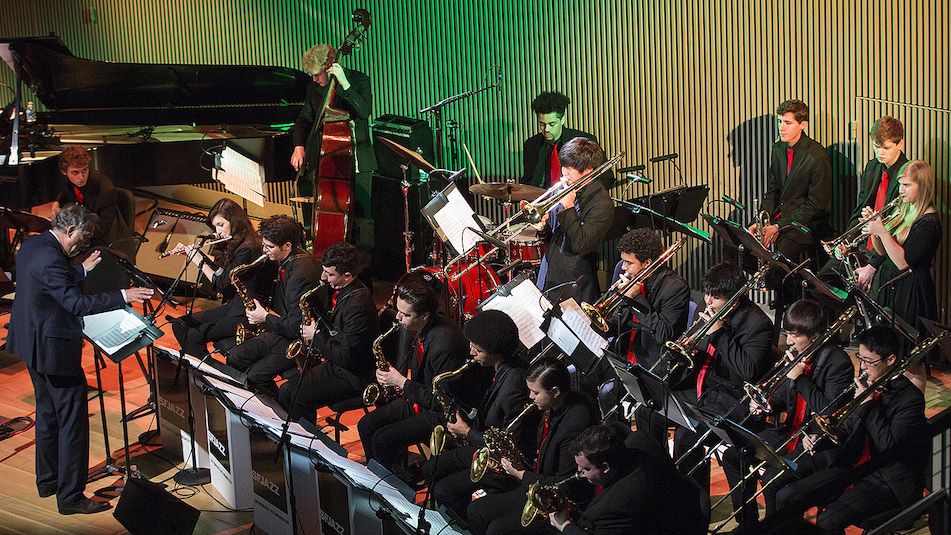 The cavernous entry to the studio, walls covered in baffling. The care taken by the recording team to ensure every musician’s levels are right, one by one. The hang between tunes, crammed into the engineer’s tiny space as takes are decided upon.

The recording studio is a learning experience in and of itself, one that the High School All-Stars have typically gone through together each spring. After all, skills like playing with headphones, getting used to iso booths, and developing studio etiquette are something every jazz musician needs. This year, the All-Stars embarked on their 2020-2021 season knowing that a studio recording was not in the cards; what we never could have known, however, was what an incredible 21st-century educational experience their brand new album would wind up being. 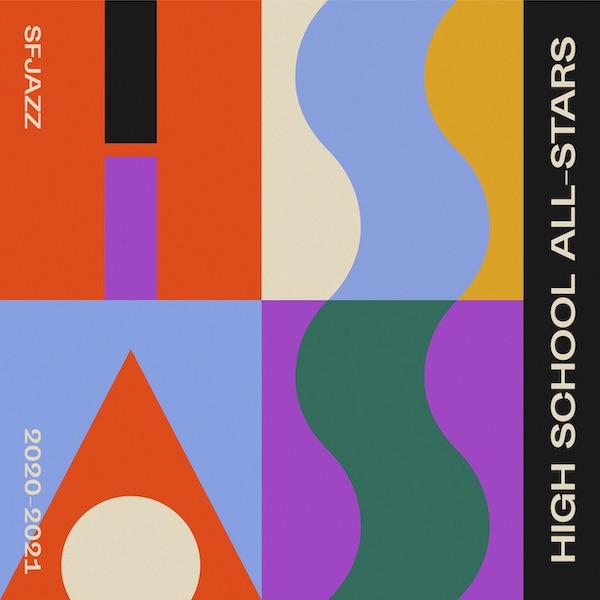 Bedroom walls hung with blankets to dampen reverberation. Students and parents alike learning digital audio software on the fly. The 01:46am timestamps on audio files as musicians carved out time post zoom school, dinner, and homework to record several takes of their part when it was finally quiet.

The way in which this album was produced developed an entirely different set of skills - from mic placement, to working with DAWs, to the imagination required by the layer cake construction of tracks starting with drums, bass, keys, guitar, section leaders, section players, vocals, and auxiliary features on up… The empowerment that comes with home-recording acumen is worth its weight in gold, and this year’s players proved that they were more than up to the task. 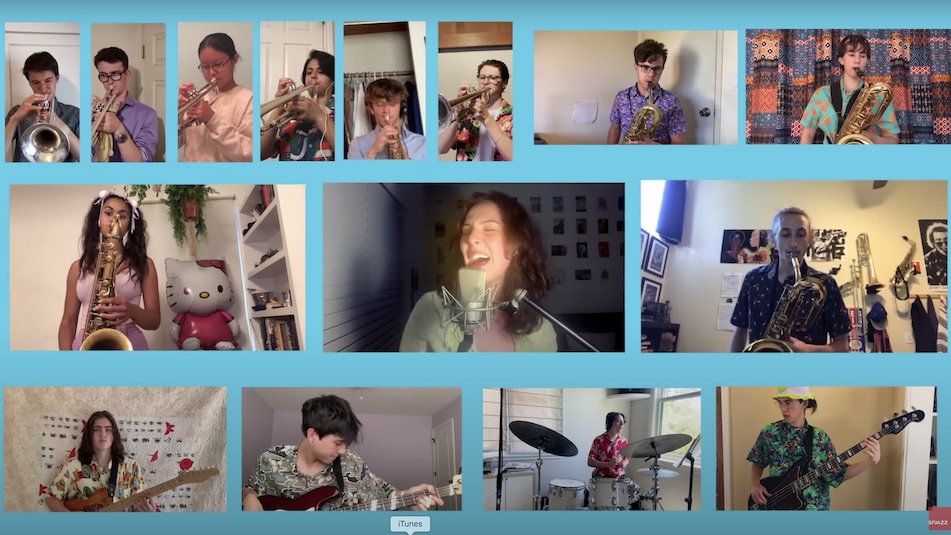 While there may have been times the All-Stars felt insular (or wished they had bingo cards to mark off each “you didn’t hit record,” “why is it so echoey?” “we can hear your parents talking in the background”), this year’s record is so much greater than the sum of its parts. Thanks in part to a dedicated production team who carefully stitched each song together, the resulting thirteen tracks are a mixture of artful arrangements and beautiful originals that belie the fact that they were recorded on phones in bedrooms. SFJAZZ wishes to give a huge round of applause not only to these intrepid players and the parents who supported them, but also to our unwavering band directors, Paul Contos and Dann Zinn, for all of their distanced instruction and invaluable editing and producing. You can find the album on Spotify, Apple Music, and Amazon Music; read on for the stories behind just a few of this extraordinary year’s tracks.

“Água Mais Quente” (track 3)
This beautiful diptych, composed by senior Oliver Tuttle and performed by the 8-piece Combo, features a gorgeous chorale intro you’d never guess would lead into the simmering, ostinato-driven samba that is the body of the tune. Having traveled to Brazil as a High School All-Star in 2019, Oliver could tell you that the tune’s name means “hotter water.”

“Mas Que Nada” (track 6)
This classic, made popular by Sergio Mendes & Brasil ‘66, gets a Tower of Power treatment in this huge funk arrangement by Pablo Gil and Tony Succar. Vocalist Riva Rubin tackles the rapid-fire Portuguese effortlessly, layering on more and more harmonies as the tune moves through an added salsa chorus. With All-Stars alumni Marcelo Pérez and Ahkeel Mestayer adding their percussion expertise to the track with timbales, bongo, and congas, this incredible tune came in at over 55 layers of audio tracks (hats off to mixing engineer Maya Finlay!)

“See The Pyramid” (track 8)
This sonic runaway-train is the fireworks display of the album. Baritone sax player Nathan McCann says of the song, “'See The Pyramid' was a monstrous tune to learn and record. I remember getting the pdf and thinking it would be fun because of the soli, then checking the tempo marking and being slightly less excited. Sending in that recording was a leap of faith, but it turned out amazing.”

“Bay Bridge At Night” (track 10)
Combo pianist Alex Perry penned this original, one of the very few tracks to be recorded by the entire Combo together at the Center (distanced, of course). Each year’s album contains one tune that stands out as the straight-ahead stunner, the track that sounds like clear ice in a highball. Turn down the lights and imagine you’re at the Top of the Mark in 1955 as you listen to this beautiful addition.

“Sleep With The Sun, Wake With The Moon” (track 13)
The record’s utterly unique final track, written by tenor sax player Daiki Nakajima, is unlike anything featured on previous All-Stars albums. From the opening tin whistle, played by Daiki, to the polyrhythmic clapping break, featuring the entire Combo, to the inclusion of the electronic wind instrument (EWI), played by Sean Huang, every page turn brings a gorgeous new flavor to this piece. After a surging return to the melody at four and a half anthemic minutes in, the piece’s denouement step dances its way back to one last beautifully simple statement by the tin whistle in the final 30 seconds - a statement as hopeful and unvarnished as we all needed.