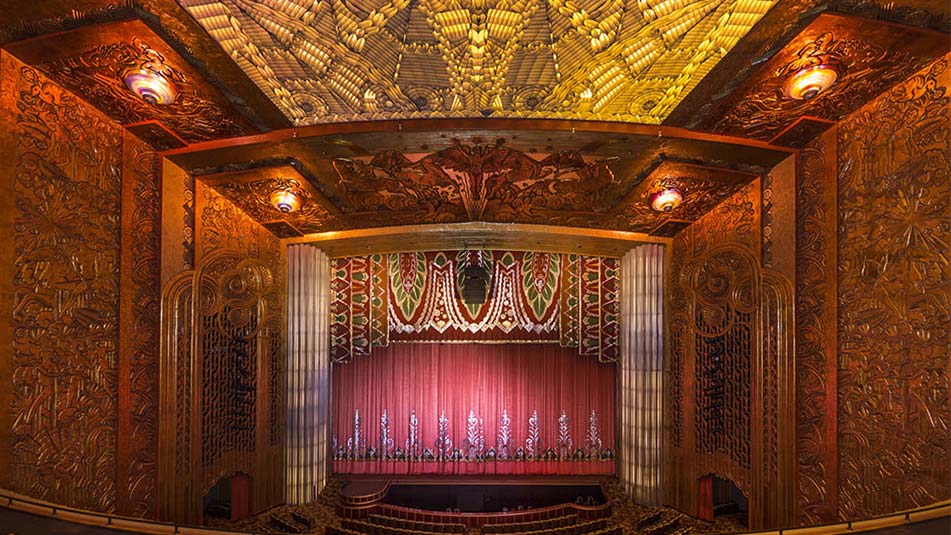 On Mar 11, Cécile McLorin Salvant brings Ogresse to the Paramount stage. In anticipation of Salvant's chamber ensemble-backed performance of the song cycle, we take a look back at the theater’s history as a performing arts space, and its legacy of orchestra and stage.

Drawn from the same architectural pedigree as the Castro Theatre, the Alameda Theatre, and more, Oakland’s Paramount Theatre evokes the movie palaces of a former age. From the start, its use as a venue for theatre, symphony, and live performances of all types has been a point of regional pride and a source of wonder.

It was 1931, in the midst of the Great Depression, when at a cost of 3 million (roughly 50 million in 2020 dollars) the Paramount opened its doors. The economic reality of the times guaranteed that it would be one of the last of its kind to do so. Along with the Bellevue-Staten building (constructed in 1929), it represented a capstone to the monuments of art deco in a city once filled with notable examples. Both buildings are now on the National Register of Historic places. In the case of the Paramount, its journey to this role of honor was a tortured one.

It wasn’t long after opening that the Paramount was shuttered. Initially conceived of supporting massive stage shows and orchestras, it faced tremendous obstacles. Its massive 3,040 seat capacity, exorbitant operating expenses, and the new financial reality facing its patrons meant it was unsustainable within its first year. When it reopened in 1932, it was a bare bones operation showing movies only, although no doubt the sunken pipe organ would be raised to make its appearance on the main stage from time to time.

In 1972, after another brief closure, the Paramount began the process that would eventually transform it into one of the finest examples of its architectural style the world has today. Purchased by the Oakland Symphony at a bare bones price and later with the assistance of the City of Oakland and many donors, the theater was painstakingly restored to its original glory. Now owned and operated by the City of Oakland, the Symphony retains performance rights, and numerous other organizations, SFJAZZ included, grace the regal stage.

The site of countless legendary performances, and a not-infrequent filming location for period films, the venue itself retains an attraction augmenting and amplifying whatever experience is being taken in from across the hall. Reserved for the most special of occasions, productions that demand a unique capacity and environment, SFJAZZ is pleased to be able to contribute to the continuing legacy of the Grande Belle of Bay Area theater history.