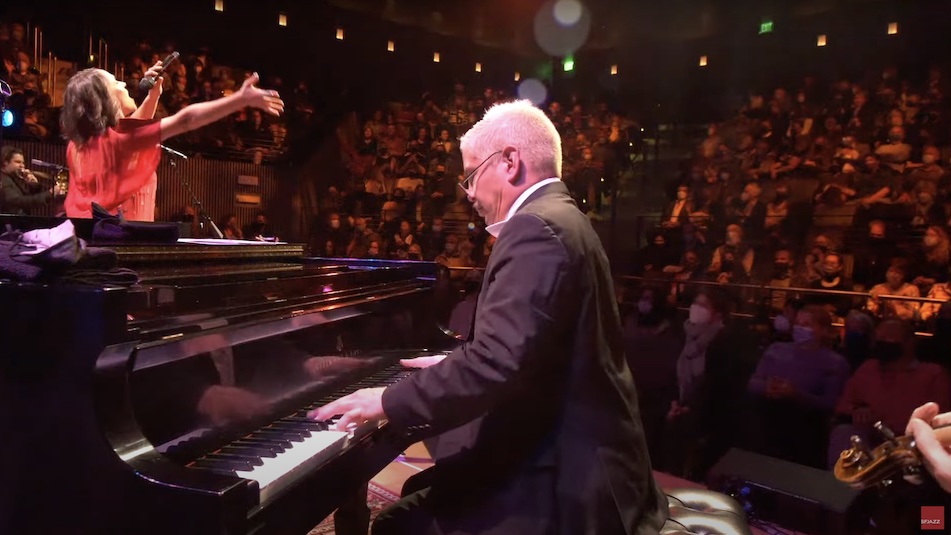 For the inaugural edition of SFJAZZ Magazine, journalist Richard Scheinin uncovers the origin story of the program, its evolution throughout the pandemic, and what SFJAZZ Members should expect on the horizon.

Two years ago, while quarantined at his home in upstate New York, saxophonist Joe Lovano got to sit back and watch himself perform onstage at SFJAZZ. The hall had been shuttered because of the pandemic — hundreds of shows were canceled. But Lovano had performed there a year earlier with two of his shapeshifting bands: Trio Fascination (with guitarist Bill Frisell and drummer Tyshawn Sorey) and Trio Tapestry (with pianist Marilyn Crispell and drummer Carmen Castaldi). Each trio played a set, and then they came together — spontaneously, without rehearsal — as a single unit.

The show had been filmed — presciently, SFJAZZ had filmed scores of performances in the years before the health crisis — and now Lovano sat down in his living room and watched himself onscreen. It was a little surreal. Filmed with multiple cameras from close-in angles around the stage, the broadcast made him feel as if he were inside a musical bubble — almost as if he were up there once again, performing with his friends. It was part of a then, brand new streaming series of archival concerts from SFJAZZ titled Fridays at Five, which turned out to be the opening salvo for an entire new and permanent digital wing of SFJAZZ. Now called SFJAZZ At Home, it’s grown a lot since those early days. It comes with its own membership – five bucks a month gets you an array of live streaming broadcasts, as well as previews and behind-the-scenes peeks into SFJAZZ. It has a cool app. Virtual hangouts with the performers are on the horizon. And that’s what this story is about — this expanding digital jazz enterprise, designed to connect a global audience to the warm and unique feeling of experiencing live music at the SFJAZZ Center, which reopened for business one year ago and is about to celebrate its tenth anniversary.

“This hall was created with the greatest reverence for the art, and we’re trying to find a new way to share that,” says Randall Kline, founder and Executive Artistic Director of SFJAZZ. “We’ve got this great place for live music. But if you can’t get here, you can still come through this whole digital wing. It feels like you’re in the hall.”

SFJAZZ At Home even has its own magazine, curated to deepen your experience of this rich, new digital environment. It’s called SFJAZZ Magazine, and these words appear in the inaugural issue.