Jazz Needs A "LeBron James Mentality": A Conversation With The West Coast Get Down's Cameron Graves

Jazz Needs A "LeBron James Mentality":
A Conversation With The West Coast Get Down's Cameron Graves 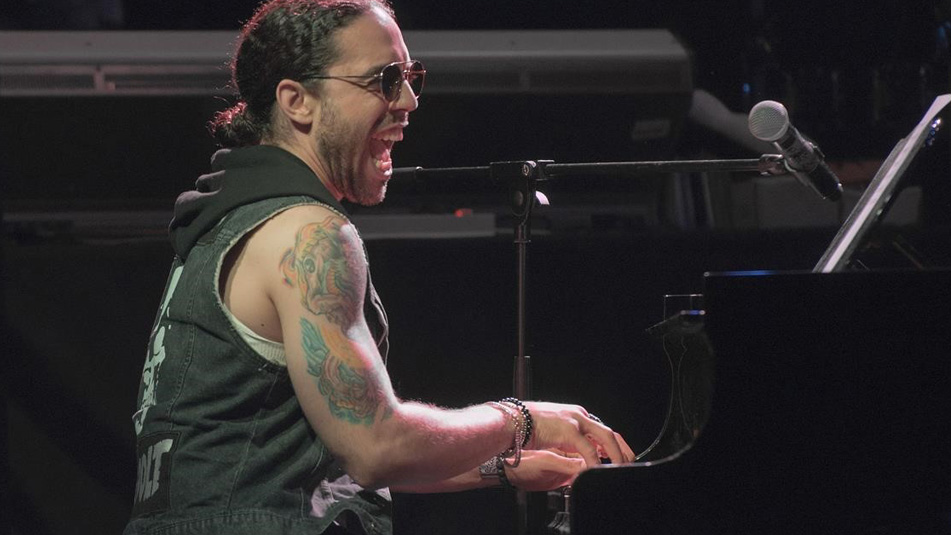 Cameron Graves is dead clear about his goal as an artist: He aims “to bring back the LeBron James mentality in the music world.”

The pianist sets out his thesis: Paganini, Chopin and Liszt were virtuosos, as is James in the sports world. Graves, who performs Oct. 19 at SFJAZZ, keeps adding names to his list of celebrity virtuosos: Art Tatum, John Coltrane, Bill Evans. He skips ahead to the 1970s: “Jaco Pastorius was one, and Joe Zawinul and Chick Corea and Herbie Hancock, and everybody in the Mahavishnu Orchestra; these were the LeBron Jameses of their time.”

His point: “In sports, the best and most talented players — the craziest athletes — are the most celebrated; they’re the MVPs. But in music, everything’s been dumbed down. Because since the ‘80s, they’ve been slashing music programs in the schools, to the point that kids can’t really relate to what a musician is doing. They have no exposure, no understanding of the basic mechanics of an instrument. So that’s our mission, man — for me and Kamasi and Stephen and Ronald Bruner and all the guys from the West Coast Get Down. We’re going to bring back the crazy music to you, and that in itself will bring back the appreciation.”

Some context: Since high school, Graves, 36, has been buddies with saxophonist Kamasi Washington, bassist Stephen Bruner (a.k.a. Thundercat) and drummer Ronald Bruner, all leaders of the loose-knit, Los Angeles-based collective known as the West Coast Get Down. It began as a grass-roots affair, with the music evolving through eight years of jam sessions in a Hollywood piano bar. But with the release in 2015 of Washington’s The Epic (with Graves on keyboards), it came of age as a movement. Word spread about L.A.’s youthful, cutting-edge jazz scene, crisscrossing hip-hop and funk, bebop-level virtuosity and the “spiritual jazz” vibe of the ‘70s. The media latched on: last year, Rolling Stone even featured Graves as one of “10 New Artists You Need to Know,” describing him as “the house pianist for the party at the end of the universe, pulling in signals from John Coltrane, J Dilla, Meshuggah and points beyond.” Hyperbole aside, all that attention “revitalizes the jazz scene,” Graves says. “People that don’t even know that this kind of music exists anymore, they go like, `Whoa, what’s that?’ It really creates an awakening, so we can get back to that musical culture of virtuosity.”

Raised in the San Fernando Valley, Graves feels connected to the Los Angeles jazz lineage: Charles Mingus, Eric Dolphy, Gerald Wilson, Billy Higgins — not to mention saxophonist Rickey Washington, Kamasi Washington’s father. Still, he says, “It’s one thing to have respect for the tradition. But what’s killing the hell out of jazz right now is to not move forward with your own ideas, to constantly be rehashing all the old standards.” Bassist Stanley Clarke, the jazz fusion virtuoso in whose band Graves has played for four years, tells him to “get away from that. Play your own thing. Now I don’t even know if I can say `jazz musician’ about myself,” Graves says. “I have to say `advanced music musician,’ because `jazz’ is too categorical and then when you say `jazz,’ a lot of times people have a preconceived notion of jazz where there’s guys in suits and they’re smoking cigarettes and they’re playing Birth of the Cool stuff.”

He thinks more about where he fits in: “You can say `jazz fusion.’ People get that. My jazz is like a hardcore version of Return to Forever and Mahavishnu.” Considering his prime influences, he also describes his music as “a mixture between Coltrane, Chopin and Meshuggah,” the Swedish metal band. “Those three, mixed, creates a higher level of tonality that creates a hypnotism that creates a connection to the Great Spirit.”

At SFJAZZ, Graves’ band — which includes the lightning-quick drummer Mike Mitchell, another veteran of the Stanley Clarke group — will anchor a week’s worth of programs devoted to “new piano” traditions. It begins with Kev Choice, also a producer and MC, paying tribute to Sonny Clark, the hard bop master of the 1950s and early ‘60s (Oct. 18). Christian Sands, who first gained attention as a protégé of Billy Taylor and blossomed as a member of Christian McBride’s grits-and-gravy trio, will lead his own trio (Oct. 20). Tigran Hamasyan, who won the 2006 Thelonious Monk International Jazz Piano Competition when he was 19, will perform solo (Oct. 21). Like Graves, Hamasyan is an assimilator of broad influences, everything from the acoustic work of Chick Corea to prog rock and the folk music of his native Armenia.

Graves’s curiosity has led him in esoteric directions. Given the opportunity, he will lecture on Hertz cycles and the spiritual effect of vibrations on the human body; Coltrane and Sun Ra understood such things, he says. Planetary Prince, his 2017 album, is inspired by The Urantia Book, an esoteric tome, 2,000 pages long, that offers an alternative history of creation and humankind’s place in the universe. Jimi Hendrix, Jerry Garcia and Jaco Pastorius are said to have been students of “Urantia,” as is Graves who “wanted to musically illustrate that book” with his album. His song titles reflect its contents: “Satania Our Solar System,” “Adam & Eve.” Its discussions of the “Seven Master Spirits” and the “Seven Grand Divisions” of the universe have pushed him toward playing in seven time, an “amazing time signature to write music in, because the music sounds very high level, as opposed to 4/4 which is a simpler rhythm. Seven is not quite a danceable rhythm. Seven is more of an intellectual rhythm.”

The son of ‘70s soul singer Carl Graves — maybe you remember his “Baby, Hang Up the Phone” — Cameron recalls family trips to Yosemite National Park, listening to nothing but Coltrane and Stevie Wonder along the way. He started piano studies at age four and maintained a strict classical routine for a good decade: Bach, Beethoven, Chopin, Debussy, Bartok. To this day, he maintains, “I don’t really have a jazz language. I really have more of a classical language over the top of jazz. Because jazz language is really rooted in blues tonality and my playing is rooted in classical tonality, and so it has a different sound to it. People say to me, `You’ve got your own sound, man.’ It’s quirky.”

Still, there’s a heavy dose of McCoy Tyner’s oceanic harmonies in his playing, he concedes. Chalk that up to the time he and Kamasi Washington spent obsessing over Coltrane albums — Tyner was Coltrane’s pianist — from the moment they met in ninth grade, seated next to each other in Jazz Band C. Their listening broadened: “Me and Kamasi and Ron and Stephen (Bruner), we were like brothers and we used to play and hang out all the time and play in crazy rhythms.” They were inspired by Frank Zappa’s “Hot Rats” and Return to Forever’s “Romantic Warrior” — as well as by the melodicism of Stevie Wonder and by the production of J Dilla whose “sample technique has changed the way I comp in jazz,” Graves says. He explains how he accompanies soloists: “Instead of comping sporadically all over the place behind the solo, I like to create a four or eight-bar loop the way J Dilla does it in the way he samples music. It’s a very hip-hop technique — creating that loop instead of having that linear sporadic, jazz-style comping, and that creates not quite a trance, but a groove.”

For all his hard work and esotericism, Graves has his practical side. One suspects that when he describes his “jazz metal kind of style, with a piano instead of guitars,” he knows that he’s offering a hook to mainstream listeners: “In today’s market, everything is about 'celebritism.' Everybody wants to be a celebrity, even if they don’t have any talent. And so we have to do that with this music,” he says, referring to his own music and to that of his West Coast Get Down friends. “It won’t grow just based on the appreciation of the music. First, you have to do what they’re doing in the plastic music business; you have to create the marketing strategy. You have to create the 'celebritism' out of the visual imagery and then people start tuning into the music.”

Then he’s got them collared. Now they’re in the club, all those people who’ve never heard a jazz record in their lives. At that point, Graves drops the pragmatism and goes for transformation: “Certain tones that you can play in the context of the music — it brings a feeling, it touches your own soul and you can really touch other people. That’s what I want to do: I want to awaken the spirit of the listener. The moment you walk away from the concert, you’re already hearing on a higher level.”