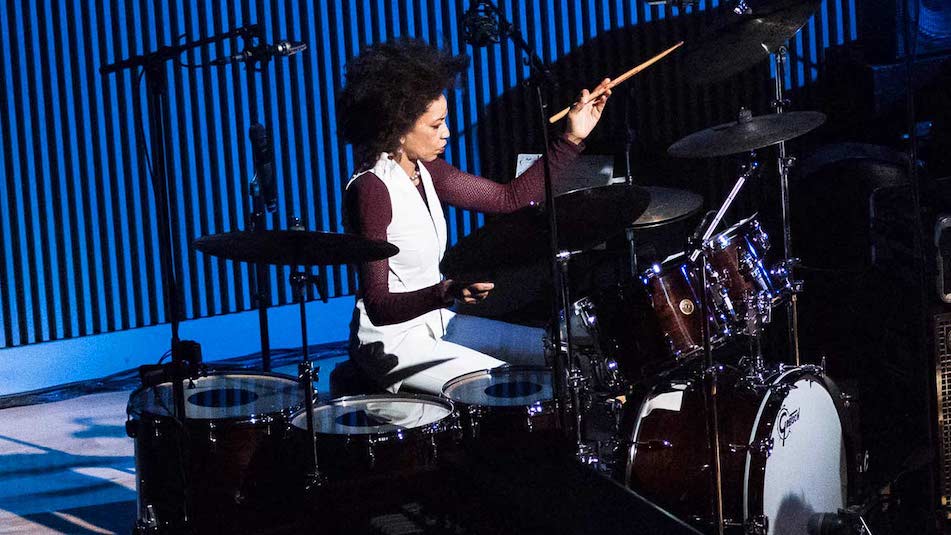 Cindy Blackman Santana grew up on Art Blakey, Max Roach, Roy Haynes and Elvin Jones. Then she heard Tony Williams. The power, precision, and beauty of his approach to the drum kit were a revelation: “It changed my life,” she says.

Over her nearly 40-year career, she has performed with everyone from Joe Henderson to Lenny Kravitz and the Santana band, led by her husband Carlos. Throughout, Williams — who died in 1997 — has remained her biggest inspiration.

In 2017, Blackman Santana called up some of her friends — including Terence Blanchard, Bill Frisell, and the Kronos Quartet — and led a tribute to Williams at SFJAZZ. It spotlit his acoustic innovations along with his pioneering work with electric fusion bands — and even a piece he composed for string quartet. Luckily, the show was filmed, and you can watch it this week on the “Fridays at Five” streaming concert series. (Sign up here for the March 19 broadcast.)

Four years ago, as the concert approached, I phoned Blackman Santana to talk about Williams and his impact. Here is some of what she had to say.

About seeing Tony Williams for the first time
"The very first time I saw Tony play was in Wethersfield, Connecticut, at a drum store called Creative Music. It’s the shop where I got my first professional drum kit. And it’s where I saw Tony give this clinic. I begged my mom for the money to go; I think it was $25. And I went to see him, and it was just Tony and a bass player, and it was one of the most incredible things I’ve ever seen. Tony was so amazing. His sound on the drums and his bravado on the drums were absolutely stunning. His energy, his whole direction — that really set a course for me. I thought, “If that’s not where I’m heading, if that’s not where I’m going, then I shouldn’t be playing drums.” It set the course for my entire life. I was so in awe of everything he did at the clinic that when he asked for questions, I raised my hand — and I couldn’t even speak!"

About his power and technical command
"Tony is known for his fire, and for his energy — but there was always beauty within that whole ball of energy. Tony would play just one note from his tom-tom or his bass drum — and it was beautiful. He was an incredible drum tuner. He had an incredible ear for picking out cymbals that sounded like a symphony when they were played together. People just don’t know. So my aspiration is that people will become more aware and more appreciative of Tony’s accomplishments and innovations as a drummer, as a composer, as a musician. We all should celebrate the beauty that he’s given us, the freedom that he’s given us as a sound innovator."

About Tony Williams’ place in the jazz tradition
"Tony loved Charlie Parker and Billie Holiday and John Coltrane. He loved all the innovators that came before him, so he was a very studied and schooled musician, and you could hear that in the way he played. He’s one of those cats who always sounds fresh. Any time I put him on — Tony or Miles or Bird or Trane — they always sound fresh. They always have that sense of innovation and newness; it always feels like a breath of fresh air. Tony comes from that ilk of people who always have that spark of energy, that feeling of youthful joy."

About his Buddha-like presence
"His flow was incredible. And he was like a Buddha, sitting at the drums — like an unmovable object that was creating the flow of the universe, always revealing itself. That’s the beauty of jazz, of creative music; it unfolds. My mom always says to me, “Cindy, life unfolds as it should.” And to me, jazz unfolds. It’s an ever-giving source of innovation and listening pleasure, excitement and discovery — and that’s what I hear in Tony."

About seeing Tony Williams for the last time
"The last time I saw him play was in New York City, and he was there with his trio — Mulgrew Miller and Ron Carter. Tony played so beautifully, whether he was using brushes or sticks or whether he was comping or soloing; everything he did was so beautiful and so musical. And that’s what I hope people will come to understand and appreciate. You know, he’s such a strong drummer and has such a powerful voice that a lot of the subtleties — some people don’t always hear them. I’m always listening for the little subtleties, the in-between things that he’s doing."