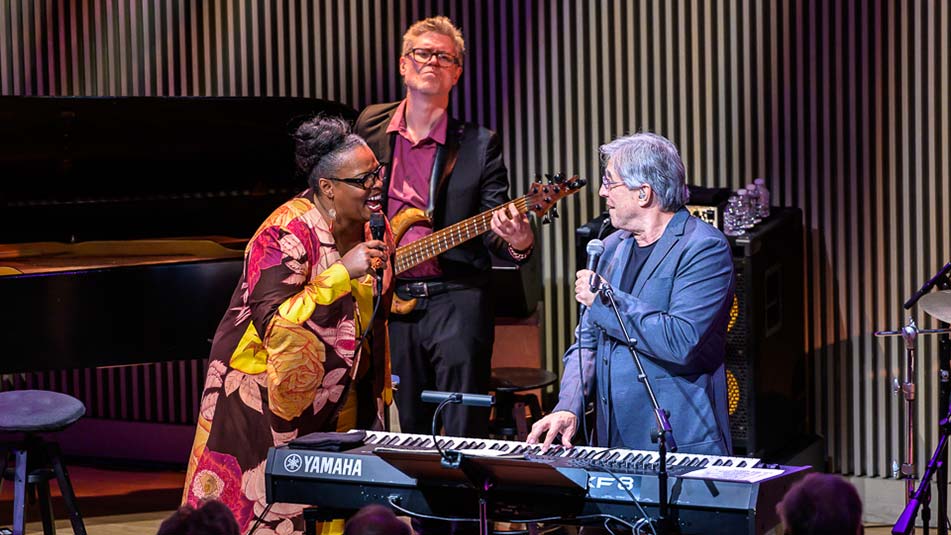 In 1981, singer Dianne Reeves turned 25 and was living in Los Angeles. With her startlingly rich contralto, she was developing a reputation as someone who could sing just about anything: jazz standards, blues, gospel, pop. She’d been singing with a band called Caldera — an electric Latin fusion band — and the experience stoked her nascent love of traditional music from around Latin America. One of her friends, the pianist John Beasley, was working with Sérgio Mendes, the Brazilian bandleader who had put bossa nova on the pop charts back in the ‘60s, and he told Reeves that Sérgio was looking for a singer. She auditioned. She got the job, and pretty soon she was enrolled in what she refers to as Mendes’ “living school,” a crash course in Brazilian music and culture.

Touring internationally with Mendes — and singing his repertoire in Portuguese, a language new to Reeves, who grew up in Denver — she discovered that Brazilian music felt surprisingly comfortable: “It’s so interesting,” she says, looking back on that period, “that you can go somewhere in the world that’s far away and find something that’s so familiar to you that you’ve never experienced before — and yet you realize it’s something you already know, that you’ve always known and that it’s part of you. That’s happened to me so much in my life — it’s why I know we’re all connected — and it’s what happened to me with Brazilian music. It has always called to me; like, I thought I was Brazilian!”

You can draw a straight line from that early “calling” to the present. For 30-plus years, Reeves — a five-time GRAMMY winner, often described as an heir to Sarah Vaughan — has peppered her recordings and stage performances with tunes by Brazilian songwriters like Antônio Carlos Jobim, Milton Nascimento and Dorival Caymmi. Now she is stepping up her game: She is about to record her first all-Brazilian album (for the Concord label) and will devote her upcoming residency at SFJAZZ (where she is a Resident Artistic Director) to Brazilian song. Her pianist will be John Beasley. Her special guest for the four shows — dubbed “Nights in Brazil” (Feb. 20-23) — will be Ivan Lins, the Brazilian keyboardist and singer-songwriter whose albums were part of Reeves’ crash course with Mendes in the early ‘80s: “That’s when I found out about Ivan,” she says, describing Lins’ body of work as “monumental... How could one man write so many beautiful songs?” 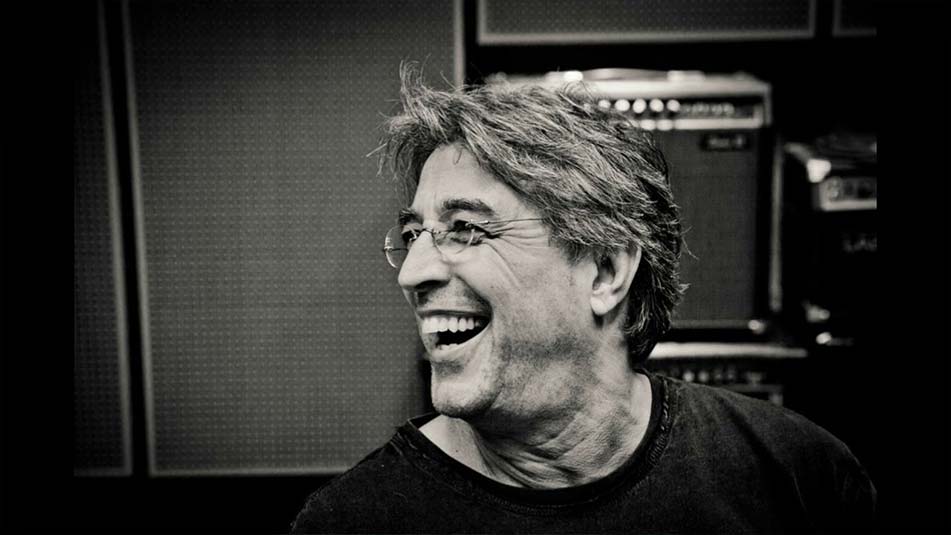 They have been widely recorded: by Vaughan, Sting, Elis Regina, George Benson, Barbra Streisand, Ella Fitzgerald, Shirley Horn, Quincy Jones and many others. Lins has a knack for underscoring his melodies with harmonies that move in subtle and surprising ways. When he composes a song, he is “connected with beauty,” Reeves says.

She first met him face-to-face in 1997 at a festival in São Paulo, Brazil, where they were part of an all-star band that included saxophonist Michael Brecker and the great Brazilian guitarist Romero Lubambo. Meeting Lins, she recalls, felt a little intimidating. But only momentarily: “The thing that I loved about him, and that I loved about all those musicians — they were all phenomenal, but everybody was also very regular and human. The whole thing was, `Let’s make some music together and make it sound good.’ So through the music, and through sitting down for dinners before the music — we’re laughing and talking, so the music has a joy to it, and you feel good because everybody’s common goal is to make music that feels like a celebration. So as big a star as Ivan was, he was still just regular and inviting and lovely, and we had a really good time. And that’s continued through the years,” she says. Last year, they performed together at the Hollywood Bowl — and for one night at SFJAZZ, where Reeves also had a residency in 2019: “And we just enjoyed ourselves so much. I said, `Can you come back again?’ And he said, `Yeah!’”

During her “Nights in Brazil” residency, Reeves and Lins will share a band that knows how to swing a samba. It includes guitarist Lubambo (one of Reeves’ regular collaborators during the past two decades), bassist Itaiguara Brandão, and drummer Rafael Barata. All three are from Rio de Janeiro, as is Lins. One of the things Reeves values in her co-star is his spontaneity, his willingness to throw away the script: “Ivan comes from a generation of musicians who are really very much in the moment,” she says. “Like one time last year, during our show in San Francisco, he was singing this song, and it just sounded so great. So I jumped in — I couldn’t help myself — and we started singing together, harmonizing and jamming on it. When you are comfortable with people in that way, you don’t have any problems.”

Lins isn’t exactly a polished singer, but Reeves objects to the suggestion that he is simply a composer who happens to sing: “No way,” she says. “He’s really a great singer, because he knows how to sing his stuff. And he knows how to emote — how to project what he’s feeling. You know, when I work with students, I tell them that having a perfect technique is at the bottom rung of the ladder, because you can have a great, great instrument and you might not be saying anything. For me, a true singer is someone who can emote and allow you to hear what they’re talking about, because they really, really feel it. And that’s what he does, and he has a lovely sound to his voice — and he knows how to pick the right notes. So if I come in, he knows how to join with me, and — oh! — it just sends chills up your spine.”

She was pretty thrilling herself, singing with Lins a year ago at SFJAZZ. On Pat Metheny’s “Minuano,” the gorgeousness of her instrument was evident: full-bodied notes way down in the baritone zone, followed by easy-as-pie leaps up into her falsetto range. The performance became chant-like, African; Reeves has a way of expanding a song in unexpected ways. Over the course of a performance, you might hear shades of gospel or reggae. Her ballads are like soliloquies, deeply felt. Her bluesy numbers pack a wallop, but she always holds a little something back. She is disciplined, elegant; two years ago, she was named a “Jazz Master” by the National Endowment for the Arts. 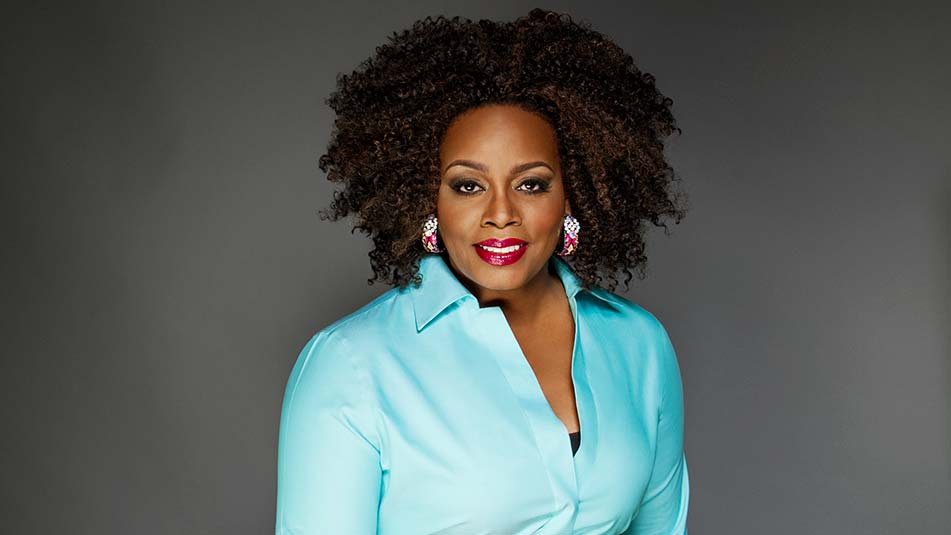 She grew up in Denver in a musical family. Her mother played trumpet. Her father sang. Her uncle, bassist Charles Burrell, is a jazz player — and also was a member of the San Francisco and Denver symphony orchestras. (One of the first African-Americans to play in a major orchestra, he has been described as “the Jackie Robinson of classical music.”)

Reeves heard a wide variety of music as a girl, and the Brazilian bug began to rear its head when she was in high school. She remembers feeling drawn to Stories to Tell, a 1974 album by the singer Flora Purim, another native of Rio. In 1975 she fixated on Wayne Shorter’s Native Dancer, the saxophonist’s Brazilian-jazz fusion album. It was groundbreaking: tropical, melodic, percolating. Listening to it was a head-rush. And Milton Nascimento’s agonizingly pure, soaring vocals were at the heart of it: “I was like, `What is this music?’,” Reeves recalls. “I liked the rhythms and I liked the feeling, and I fell in love with Milton’s voice, immediately. It was just so vulnerable-sounding. It was sweet and it was pure and clear and emotional. I loved that record. The music was moving in a totally different way through all these collaborations. You know, this was before the term `world music’ was even coined, and jazz musicians were already exploring it.”

Also around 1975, Reeves went to Los Angeles to visit her cousin George Duke, the pianist, who happened to be recording with Flora Purim and her husband Airto Moreira, the drummer and percussionist. “So there I was at the Paramount studio – corner of Santa Monica and Vine -- just hanging out and listening,” she says. Maybe without knowing it, Duke was nurturing her Brazilian obsession: “Oh my God, yes. It was through George. He loved this music, and he let me be a fly on the wall.”

Two years later, the band Caldera was preparing to record its album Sky Islands. Its members were from all over Latin America — Argentina, Costa Rica, Cuba, Brazil — and “they were taking the traditional music and giving it a jazz kind of flavor. It was really extraordinary,” Reeves says. “And oddly enough, Flora was supposed to do the record, but wasn’t available. And the producer for that recording was Larry Dunn, the pianist who had been a member of Earth, Wind & Fire — and he was from Denver! So he recommended me and that’s how I made the session.” She had recently moved to Los Angeles: “It was a really rich time for the music. Everybody played everything, and a lot of music was starting to come up out of Brazil. People were listening to (Eumir) Deodato, and I’d heard Sarah Vaughan’s album I Love Brazil! But my first real experience of the music being played in a real traditional way was on that recording session with Caldera. And that just lit a fire under me, and from that point on, I was in.”

Touring with Mendes in the early ‘80s, she found herself immersed in “the beautiful culture of Brazil.” Mendes’ wife, the singer Gracinha Leporace, contributed to Reeves’ crash course, giving her some tricks for singing in Portuguese: “Thank God for Gracinha; she was amazing. When I started working with Sergio, I had like 15 or 20 songs that I actually had to learn in about two and a half weeks. Gracinha had broken them down phonetically, so I could see the words, and I would just learn them. I was in my early 20s and I was like, `I got it! I got it! I got it!’ And I would go out to Griffith Park and put on my earphones and learn the songs.”

When she began making her own albums, Reeves often would include a Brazilian number or two. Over the years, she has recorded “enough Brazilian songs for a compilation,” she says. “So I just feel like it’s time to really focus on this music that means so much to me. And to spend four nights singing with Ivan — that’s like a dream.” She hears an essence in his music, a quality that’s relatable to Brazilian music, generally: “The thing about it is this joy — that it is infectious. It is truly a joyful sound, a joyful noise. It is a music that brings people together. I mean, you go to Brazil and you hear people perform this music. It doesn’t matter what’s the age or generation of the people who are singing or the people who are listening to it — and it could be 15 million people there, they’re all gonna sing every word, and that’s the thing that I love. It brings people together. A few years ago, I was part of a festival that was all over Brazil, and it kept going for three straight days — on stages all over the country... I only sang in São Paulo, and it was amazing. I was just floored, and after we finished, it just continued on — and on! I’d never experienced anything like that, because music is not just for entertainment there. It’s a part of life. It’s like food.”