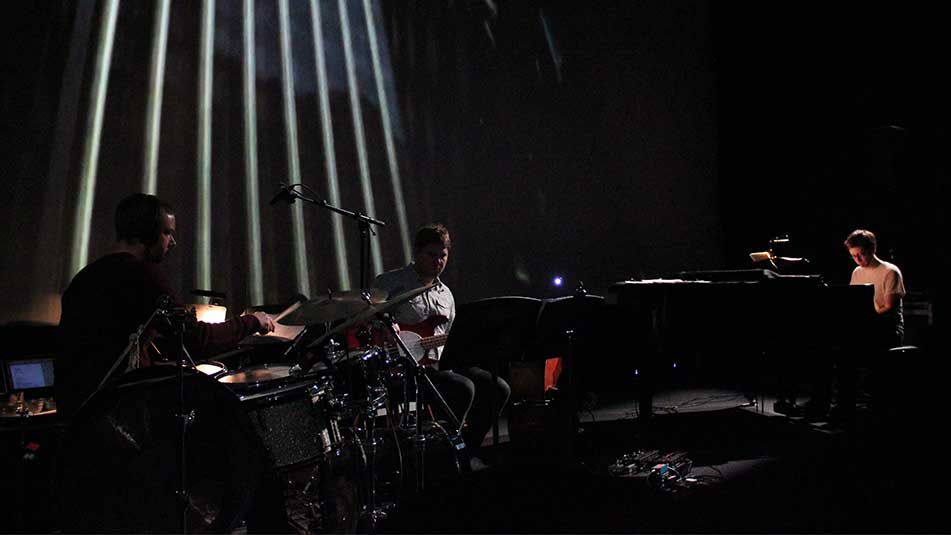 SFJAZZ has a long tradition of presenting films accompanied by live music – from the annual Halloween performances of silent films at Grace Cathedral to Philip Glass performances at the Paramount Theatre in Oakland. On October 10th that tradition continues with the performance of GoGo Penguin’s new score for the landmark 1983 film Koyaanisqatsi.

The task they’ve chosen for themselves is an audacious one. Koyaanisqatsi is the first full-length film ever scored by Glass and certainly one of the most revered. Envisioned by its director Godfrey Reggio as a meditation on human technology and its impact on nature, Koyaanisqatsi, is a set of moving images (often in slow motion) with no dialog save for a scattering of chants in the Hopi language (the title being translated as “Life Out of Balance”). The score, similar to in the age of silent film, is therefore crucial.

The musical style of GoGo Penguin lends itself categorically up to the task of Koyaanisqatsi with its minimalist, repetitive, hypnotic qualities. It doesn’t distract from, but rather compliments, the contrasting beauty and ugliness on screen, lulling its viewer/listener into the appropriate meditative state.

We’re lucky at SFJAZZ to have established composers like Glass to perform their scores for the screen at our shows. We’re equally lucky to have upcoming composers like UK-based GoGo Penguin bring new innovative interpretations to our shores.

GoGo Penguin performs OCT 10–11 in Miner Auditorium at the SFJAZZ Center. Their latest EP, 'Ocean in a Drop: Music for Film' will be released Friday OCT 4.