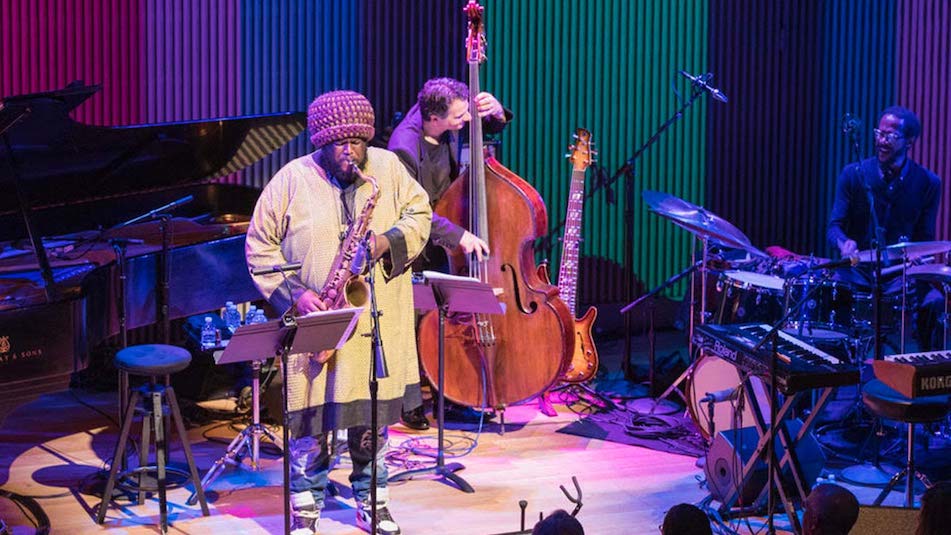 To get ready for This week’s Fridays at Five live stream is the first part of our exclusive four-part Wayne Shorter Celebration series, featuring saxophonist Kamasi Washington and saxophonist/keyboardist Terrace Martin joining Wayne’s quartet members Danilo Pérez, John Patitucci, and Brian Blade. To get ready, we take a closer look at the moment Kamasi Washington knew he would be a jazz musician.

So the story goes, Kamasi Washington had never picked up a saxophone before. As the son of Los Angeles jazz great Rickey Washington, he’d certainly been surrounded by jazz all his life and had been playing clarinet in school, but his world changed one evening when, at age 13, he found his father’s soprano saxophone on the piano and wanted to recreate the wondrous sound he heard his father coaxing from it. The song he figured out when first exploring the possibilities of the instrument set him on a life path that has a direct bearing on where Washington is today, the status he has attained in music, and why he was asked by Herbie Hancock to perform during the Celebration of Wayne Shorter week at SFJAZZ in January, 2019.

That first tune was Shorter’s composition “Sleeping Dancer Sleep On,” a languid, evocative waltz first recorded in 1960 during Shorter’s epochal four-year stint as saxophonist, musical director, and primary composer with drummer and bandleader Art Blakey. Over the 35-year existence of his legendary Jazz Messengers, Blakey earned a fully-deserved reputation as jazz’s greatest talent scout, and for Wayne (as with fellow Wayne Shorter Celebration week participants Branford Marsalis and Terence Blanchard), his experience with Blakey was pivotal in directing his career as a composer and bandleader.

Those landmark albums Blakey made with Shorter for Blue Note from the late 1950s through the mid-60s, including A Night in Tunisia, Like Someone in Love, Mosaic, and The Big Beat, became a source of endless inspiration and set a standard for musical hipness and compositional power that would inform Washington’s development as an artist.

As he told Esquire magazine in 2016:
“I was that kid who made his friends listen to the albums they didn't want to. I got into Art Blakey in elementary school when my friends—me included!—were all into NWA and gangster rap. I used to tell my friends, "Art Blakey is way more gangster than Eazy-E!" I ended up getting my friends into jazz, and all of a sudden there was this little group of kids in the middle of South Central that were all into hard-bop.”

Here's Art Blakey and the Jazz Messengers performing "Sleeping Dancer Sleep On." This track was recorded in 1960 during the sessions that produced Blakey's seminal A Night in Tunisia, but was not released until 1967 with the other remaining tracks as the album Like Someone in Love: