The Jewish Music of Woody Guthrie
The Klezmatics Interview 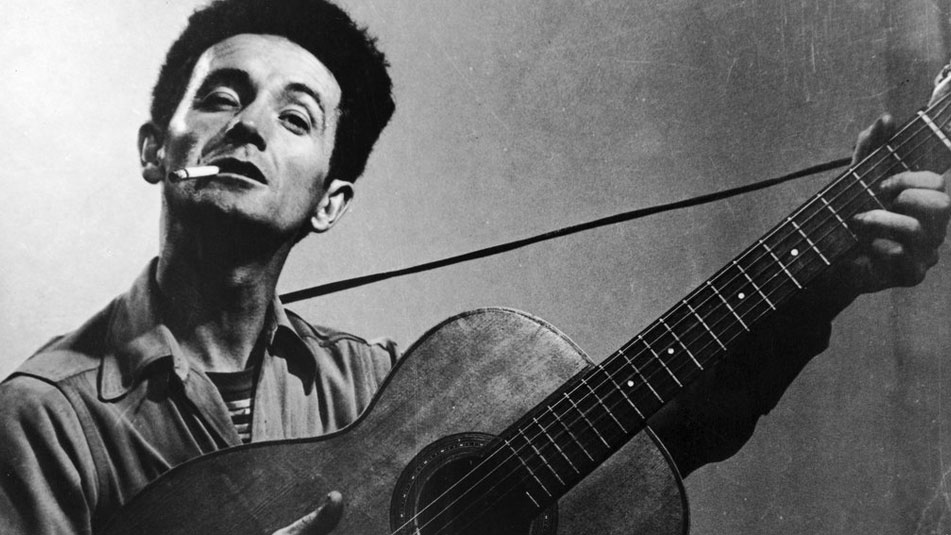 He was the Dust Bowl troubadour who composed “This Land is Your Land.” He was the workingman’s folk singer. He was Bob Dylan’s hero.

Most people know that much about Woody Guthrie.

Not so well known is this: Guthrie, born in Oklahoma, spent half his life in New York City — much of it in Coney Island where he lived with his wife Marjorie Mazia, a Jewish dancer with the Martha Graham Dance Company. Her mother was Aliza Greenblatt, a well-known Yiddish poet and activist who lived across the street and cooked weekly Shabbos dinners for Woody, Marjorie and their children — including Arlo (the future folksinger) and Nora (who grew up to found the Woody Guthrie Archive). Woody composed dozens of songs inspired by his Jewish family life, by the Jewish world of Coney Island, and by Jewish holidays, especially Hanukkah. For many of these songs, he wrote out the lyrics, but never got around to composing the music.

Enter the Klezmatics, standard bearers for Old World Jewish music — often sung in Yiddish, but tinged with the band’s love of American folk music, Celtic music, Afro-Caribbean music. In 1997, Nora Guthrie asked the group — she was becoming a fan — if it would like to set some of her father’s Jewish-themed lyrics to music. The answer was “yes” and the result was a pair of albums in which the Klezmatics brought Woody Guthrie’s unfinished songs to life: Woody Guthrie’s Happy Joyous Hanukkah (released in 2005) and Wonder Wheel (which won a 2006 GRAMMY for best contemporary world music album).

On Dec. 22, the Klezmatics will perform many of these songs in its “Happy Joyous Hanukkah” program at SFJAZZ. We spoke to Lorin Sklamberg, one of the group’s founding members — as well as its lead singer, accordionist, pianist and guitarist — about the Jewish music of Woody Guthrie.

Q: Did you listen to Woody Guthrie’s music when you were a boy?

A: Of course! My mom was a folkie; she played guitar and sang. And she’d listen to the radio all the time, and she entered a lot of radio contests — the ones where they say, “The fourth caller wins” this or that. So one of the prizes that she won was the album of Woody Guthrie singing children’s songs. I grew up listening to “Clean-o” and “Take me riding in the car, car.” 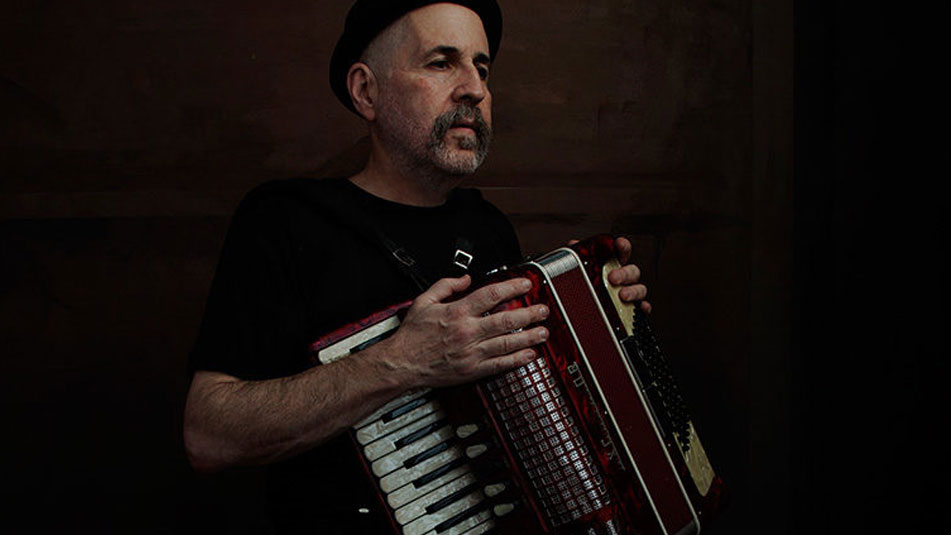 Q: I know that one: “Front door, back door, clickety clack/Take you riding in my car.”

Q: Do you have favorite Woody lyrics from his Jewish-themed songs — words that touch you most deeply?

A: I suppose that would be “Come When I Call You,” which is the song that kicks off Wonder Wheel. I set those words to music, and I just think that song has so much to say. He was kind of elaborating and riffing on a traditional song called “Children, Go Where I Send Thee,” which is an African-American spiritual — and a Christmas song. He made it into an anti-war song, as well as a very personal song that references his daughter, who perished in a fire. (Note: Cathy Guthrie died at age four). I think that that song — it has so much stuff in it, about who he is and about what he believes and about his own personal tragedy. And at the same time it still puts kind of a positive spin on things.

Q: Will you recite some of the lyrics?

Oh, will you come when I call you?

I’ll come when you call me

I’ll call you at half past two

Two’s for the love of me and you

One’s for the pretty little baby that’s born, born, born and gone away

I just love that.

Q: What about his funny lyrics? “Mermaid’s Avenue” — about the street where he lived in Coney Island — is a crack-up.

Where the lox and bagels meet,

Where the hot dog meets the mustard

Where the sour meets the sweet

A: It is a funny one. It’s kind of quintessentially Woody Guthrie — and the thing about some of his stuff is that still there are things that I don’t understand. Like in that song, there are these two lines:

I don’t know what the bulls are! Are they bulldogs? Also, it’s so interesting — in the middle of the song, he describes the scene on the beach and how “the prettiest of the maidelehs leave their legprints in that sand.” Who else would throw a Yiddish word like that into the middle of that sentence?

Q: Maideleh is Yiddish for a young woman.

A: Right. And this image of “legprints” — if you’re lying on the beach and you’re sunning, and then you get up, there’s going to be an imprint of where you were lying. It’s just a funny line.

Q: What do we know about Woody Guthrie’s Jewish family life?

A: We know the family had a very multi-cultural Hanukkah. They had a tree, but they called it a Hanukkah tree. As far as Jewish history, he certainly saw that the Jews had fought for their freedom — to be who they are. And I think that he saw a parallel to the modern world with its human rights struggles. Since members of his family were Jewish, he was able to make a connection.

Q: Nora Guthrie gave the Klezmatics dozens of Woody’s Jewish-themed lyrics. Are there any you set to music that didn’t make it onto the two albums?

A: We probably have another half an album’s worth of material that we never recorded. There was at least one other Hanukkah song. There were other holiday songs, too, and some songs of biblical material. This Woody project was a big inspiration for us. And I think Woody was inspired by Aliza Greenblatt, his mother-in-law. 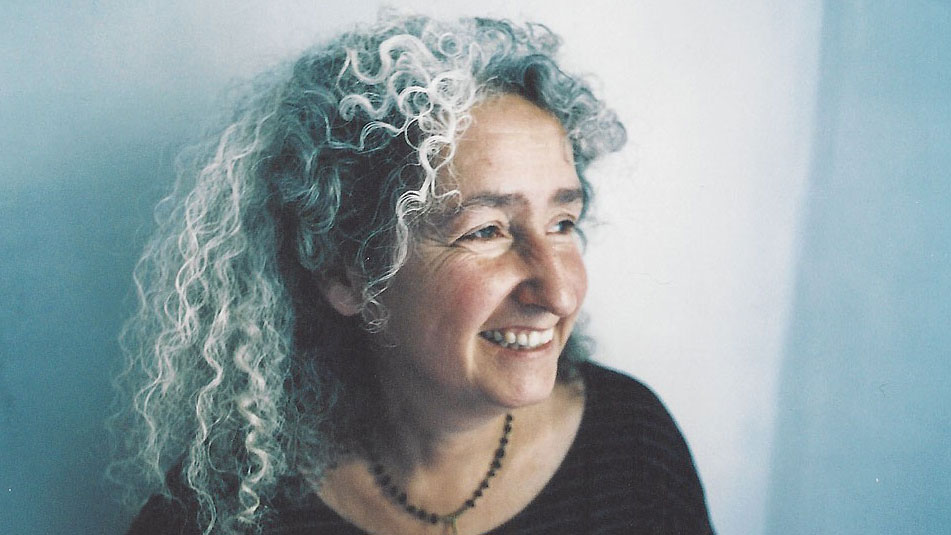 Q: When you first got into the project, did you know much about their relationship?

A: I knew that Woody Guthrie’s mother-in-law was a Yiddish poet. That’s it. But I didn’t know the details — that they actually lived across the street from each other. And the idea that there was some sort of cross-influence or that she and Woody had any kind of collaboration — it didn’t occur to us that their relationship was anything more than a factoid. So we were happy to discover that she had inspired this work.

Q: How did she inspire him?

A: It’s hard to know exactly. Perhaps he showed her his lyrics and asked her what she thought. Based on everything we’ve learned, there was some kind of collaboration. She had a hand in it. That was Nora’s impression, as well.

Q: Aside from the family connection, what drew Aliza and Woody together?

A: Aliza was a political activist. When Woody knew her after the war, she was active in what we would call the Zionist movement. You can imagine the trauma of what people went through, and I’m sure they talked about it.

During the war, she was writing anti-fascist material, and so was Woody. Of course, her material was in Yiddish and his was in English, but they were writing at the same time about the same subjects from different perspectives. I have no written documentation, but it seems likely to me that they were discussing this stuff.

Q: Let’s talk about a few more of Woody’s “Jewish” songs. Did Nora give you any parameters for setting her father’s words to music?

A: No, it’s not as if Nora had said to us, “I want you to write material that sounds Jewish.” She just said, “Go where you want.”

Q: Tell me about the tune “Happy Joyous Hanukkah.” Woody wrote the lyrics. And you wrote the music.

A: As we went through his materials, we discovered one of his common tricks: He would use a pre-existing song structure — or a tune that people knew — and he would alter the lyrics in order to say what he wanted to say. So “Happy Joyous Hanukkah” — like “Come When I Call You” — is another song where he kind of riffs on “Children, Go Where I Send Thee,” the Christmas song I mentioned earlier.

Q: Was the musical structure implicit in his lyrics?

A: Yeah, it was. And what came out of me was something that sounds somewhat Jewish, but also is very much in the style of the Americana or American folk song world. It’s relatively simple and repetitive, which is also one of his devices — and it’s how a lot of traditional Jewish music is structured, too.

Q: Woody wrote both lyrics and music for “The Many and the Few.” That one tells the story of the Maccabees, who led the Jewish revolt that’s commemorated by Hanukkah — but it sounds kind of like an Appalachian ballad.

A: That song is a bit of a history lesson. When Woody recorded it, he did it very rhythmically. We did it more ad lib, with kind of a drone underneath, and we decided to slow it down. It’s not one that we do very often, but maybe we’ll do it this time, in San Francisco. 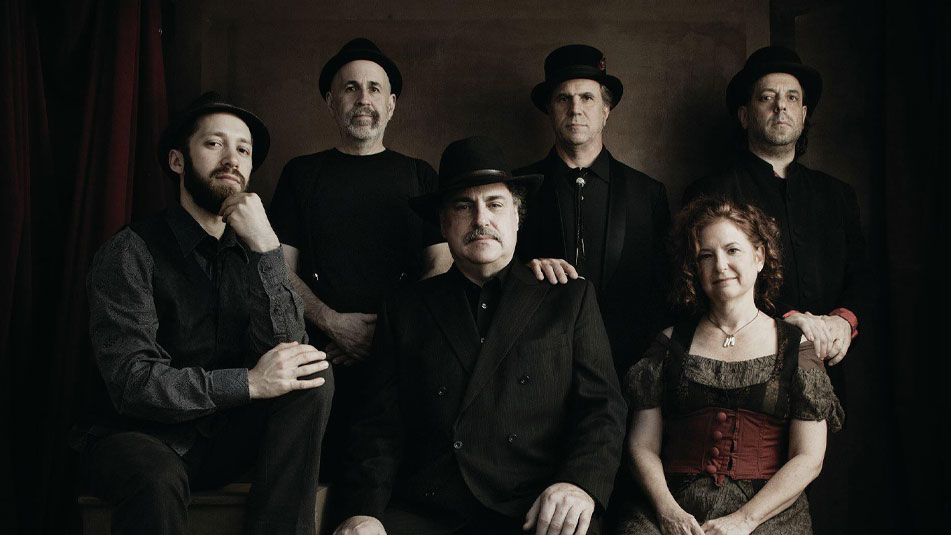 Q: Who comes to your Hannukah shows? Do you get much of a Woody Guthrie audience?

A: We’ve always attracted a diverse audience. Some of it will be about the Guthrie connection and some of it will be Jewish people interested to see a Jewish band. And interestingly enough — at least in the United States — I think we were originally more accepted by the folk world music scene than we were by the Jewish world. It took time for the Jewish community to catch on to what we were about and embrace us. At the beginning, it was frustrating. On the other hand, we were lucky to come of age when people were really interested in all this global music that comes from different places on the planet.

Q: Is there any chance that the Klezmatics will do another Woody Guthrie project?

A: We talk about it. The thing is, Nora’s always thinking forward, so my impression – at least for the moment — is that it’s not likely. But I would never say never, because I think we as a band would love to do another round of material. There’s certainly lots to choose from. He wrote around 3000 lyrics, and, of the 3000, only 300 exist with his melodies. So that’s 2700 songs that are waiting to be put out into the world. And she’s been parceling them out for years, to bands whose work she likes. So I think if the timing were right and we came up with an interesting spin on it, I would imagine that she would be into it.

The Klezmatics perform December 22 in Miner Auditorium at the SFJAZZ Center.