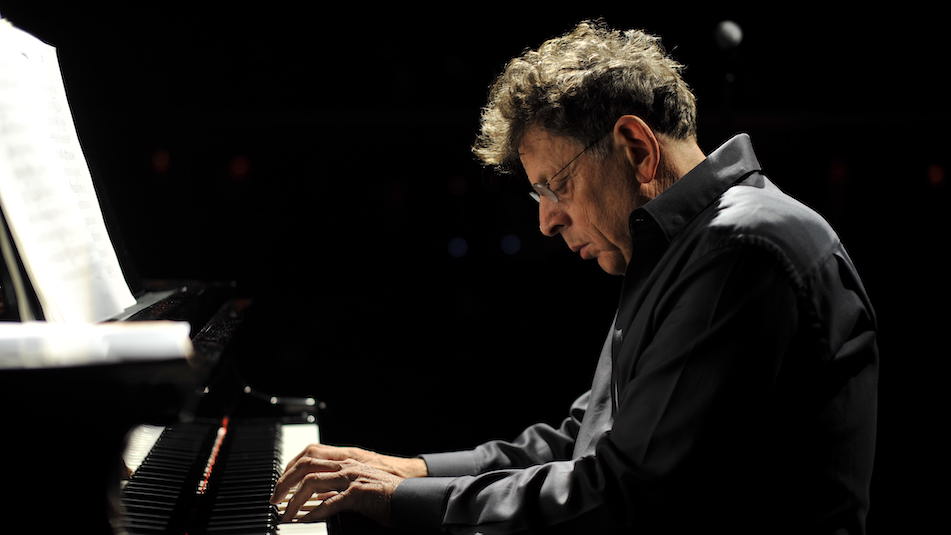 Philip Glass has composed 14 symphonies, two of them based on music by David Bowie. His hundreds of compositions include movie scores, string quartets, an opera based on the life of Gandhi, and a song for Mick Jagger.

He once composed the music for a pair of TV commercials for Altoids mints: “I did it for the money!” he explained.

He is prolific and unpredictable.

In 1994, he premiered his opera La Belle et la Bête, a singular hybrid of cinema and live operatic singing. Audaciously, Glass took one of his favorite films — French director Jean Cocteau’s classic, black-and-white surrealist treatment of the fairy tale “Beauty and the Beast” – and stripped away its soundtrack. He also silenced its actors — and turned the text of their spoken dialogue into operatic song. As the 1946 film was projected above the opera house stage, the movie actors appeared to be lip-synching to the live performance by Glass’s cast of singers, performing in French.

But nearly 30 years have passed.

The opera has been staged dozens of times, worldwide. And when Nicole Paiement — artistic director and conductor of San Francisco-based Opera Parallèle — sat down with Glass at his home in New York last fall, she suggested a new production of La Belle et la Bête that would transform the composer’s original transformation of Cocteau.

It would vastly extend the cinematic dimension of the opera. The film’s imagery would now be projected throughout the concert hall, covering its walls, enveloping the audience in a dream-scape. Through technological tricks, the singers would even appear inside the original film. 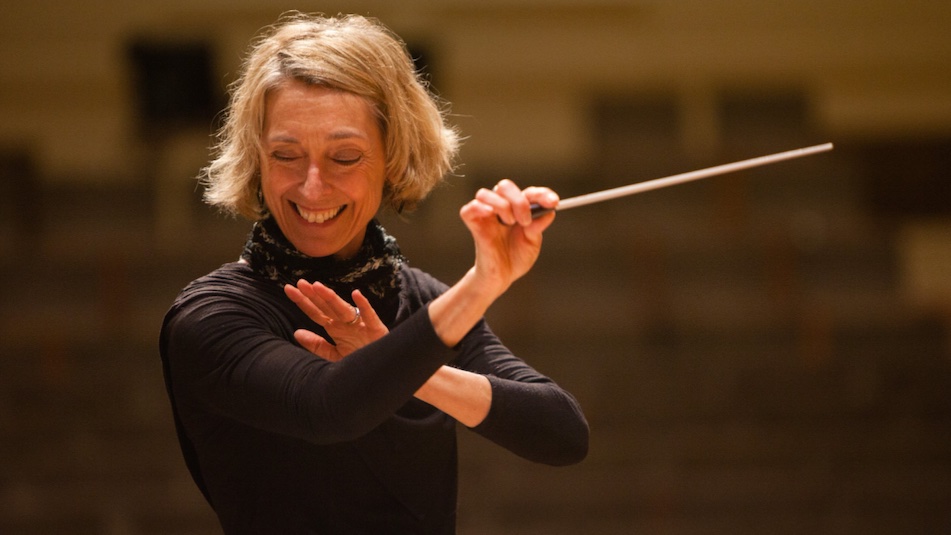 “I told Phil that we planned to push the boundaries of what is real and what is surreal, and what is a dream — which is a big theme of Cocteau,” Paiement recalled. “And Phil said, `I can’t wait for you to do this.’ He said, `My philosophy of success has been, I try to never say no.’ And I thought to myself, `What a marvelous attitude for an artist to live by’ — to always think, `What possibility could come out of saying yes to a new idea.’”

By saying “yes” to Opera Parallèle’s upcoming production at the SFJAZZ Center (July 14-17), Glass, who turned 85 in January, is giving the company’s creative team full license to explore new technologies — and to further evoke the sensibility of Cocteau, who was also a poet, novelist, playwright, and visual artist. Brian Staufenbiel (the production’s director and concept designer) and David Murakami (its projection designer and director of photography) have green-screened their cast of singers to create new filmed excerpts of La Belle et la Bête, matching the action of the original.

When the opera is performed next month, both the 1946 film and its mirror image from 2022 will be projected above and around the stage as the four singers perform. Textures and imagery from Cocteau’s film — forest scenes and assorted architectural elements, including weird candelabras (with disembodied arms) from the Beast’s palace — will wrap around the interior of the hall, whose walls were designed to serve as projection surfaces. The genie behind these effects is the new immersive media projection system at SFJAZZ, which has been likened to a Bill Graham light show at the old Fillmore West — but on steroids.

It’s a fit for Opera Parallèle, which has been staging contemporary works, and playing with technological possibilities, since 2010. (Its many past productions include Champion: An Opera in Jazz by Terence Blanchard, staged at SFJAZZ during the 2015-16 season.)

“We’re in a time of necessary experimentation to push opera into the world — not just to keep it alive, but to find new audiences and to integrate new technologies,” Staufenbiel said. “And this immersive system is a perfect vehicle, because it allows us to bring in advanced filmmaking and effects.” In the finale of this production — when video images of Opera Parallèle’s cast appear inside the original film, supplanting Cocteau’s 1946 cast — the effect “should be thrilling. It makes you feel like opera can do anything.”

Both film and opera — not to mention the famous Disney animation feature from 1991 — are based on the 18th century fairy tale by Jeanne-Marie Leprince de Beaumont. The story is familiar: A handsome prince is cursed to live as a monstrous beast, and a brave beauty agrees to be his prisoner in order to save her father. Of course, all ends happily when La Belle gradually falls for the kind-hearted Beast who then transforms to his former princely self.

Opera Parallèle working on new filmed elements for the production

For the production at the SFJAZZ Center, costume designer Natalie Barshow has made soprano Vanessa Becerra (in the role of La Belle) a near lookalike for Josette Day, who played Belle in Cocteau’s film. Likewise, baritone Hadleigh Adams (as La Bête) will be costumed to resemble the Beast of 1946 — actor Jean Marais, who was Cocteau’s real-life lover.

It’s been said that Cocteau used the film to explore his own experiences as a gay man. Indeed, the Beast tells Belle that he is at war with himself — trapped, lonely, an outsider.

More than a romantic fantasy, the new production “is incredibly timely and relevant,” said Staufenbiel, who alluded to the recently enacted “Don’t Say Gay” law in Florida. “There are political and sociological discussions that can be borne out of this film and the opera — what Cocteau was going through and what the LGBTQ community is going through right now.”

He has suggested that La Bête’s beast-like head should be seen as symbolic: “Being a gay man in the early 20th century, Cocteau understood what it was like to live with a mask, in fear of showing his true self. Hence, his greater allegorical question: Can we go beyond external appearances and categories — the conscious, the beast — and discover what beauty lies inside the soul, the subconscious? When I take this mask off, will you love me for who I am?”

With La Belle et la Bête, Opera Parallèle will achieve a cherished goal: to stage all three operas composed by Glass in homage to Cocteau. Having presented Orphée in 2011 and Les Enfants Terribles in 2017, the company is completing the trilogy “as an 85th birthday gift to Philip,” Paiement said.

Four singers will be joined by an unusual ensemble: three keyboardists, a percussionist, and the Bay Area-based MANA saxophone quartet. Glass grew up in Baltimore and has spent most of his life in New York. But as a young man, he trained in Paris with the pedagogue Nadia Boulanger, who taught many of the leading composers of the 20th century.

If you know Glass’s music, you will recognize his trademark minor-key arpeggios and kaleidoscopic textures.

But he is something of a Francophile, and this operatic score is unique in that it feels very French: “Philip speaks French, and he follows beautifully the rhythm and the sonic aspects of the language,” says Paiement, who is French-Canadian and grew up in a French-speaking home. “There is also a great transparency of the score that I feel is very French. You’ll have these dense moments — tragic, tragic — and all of a sudden, poof! It evaporates and you have this openness, this lightness, and suddenly you’ll hear a flute. Again, very French. Philip creates these transparent textures, just like you would have in a painting — or in the sky.”

A scene from the 2013 production at the Edinburgh International Festival

Over a period of years, Staufenbiel and Paiement spoke with Glass about the possibility of staging La Belle et la Bête.

Then came the pandemic and Staufenbiel found himself turning more than ever to film and media hybrids as a way of keeping projects alive. Over the past two years, he filmed the opera Flight, by composer Jonathan Dove, for Seattle Opera. Working in a hangar on Treasure Island, underneath the Bay Bridge, he also created a feature-length film of composer Gordon Getty’s opera Goodbye, Mr. Chips.

With La Belle et la Bête, Opera Parallèle aims to create a multi-media and multi-sensory experience for the audience: “You feel drawn into the space of the film; you’re not just watching it,” Staufenbiel said. “It pushes the imagination, pushes the surrealism. So, if Philip created a new genre with his opera, a new hybrid, we’re taking it to the next level — a hyper-hybrid genre!”

Paiement gets the last word: “Opera Parallèle is trying to expand what is opera in the 21st century,” she said. “If you’re interested in seeing the variety of art forms that can exist under the umbrella of opera, this is it. This is really pushing the boundaries. And someone who might think that `opera is not necessarily my thing,’ will come and say, `Oh! I can relate to this.’”