Lisa Mezzacappa: Composing for the Origin of the Universe

composing for the origin of the universe 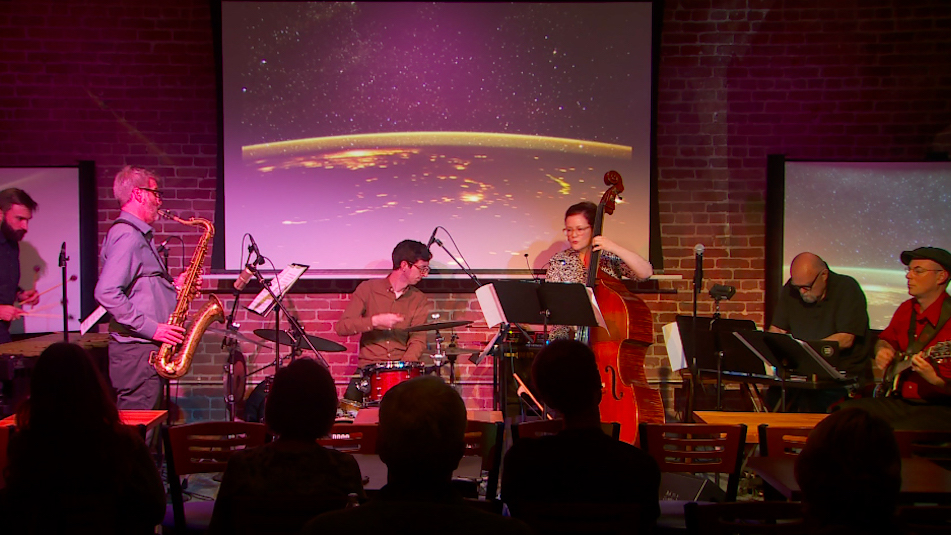 Bassist and composer Lisa Mezzacappa brings her sextet to SFJAZZ on 3/2, performing her music inspired by Italian fantasy author Italo Calvino’s whimsical short story collection Cosmicomics. We asked her to talk about the project, and she was kind enough to write this guest post for us.

It’s a real pleasure to be able to bring my new suite of sextet music to the Joe Henderson Lab next month. Last year, my band and I embarked on a new journey, as I composed a series of pieces for us, inspired by Italo Calvino’s incredible Cosmicomics stories. When I’m developing new music, I tend to work with the musicians in my ensemble for many months, workshopping new material, revising, refining, expanding some ideas and discarding others. We had the great opportunity of playing a series of work-in-progress salon concerts at Bird & Beckett Books throughout last year, where we experimented with the early versions of the pieces you will be hearing in these two sets on March 2.

Calvino’s Cosmicomics – originally published as a set of 12 stories in 1965, which he gradually added to over his career, to total 31 – are like fairy tales for nerdy adults. Each story takes a scientific theory or principal about the origins of the universe—the movement of planets, the distance between galaxies, the evolution of organisms—and humanizes that phenomenon with a charming, often hilarious, sometimes lewd and sometimes poignant, first-person narrative. Salman Rushdie wrote, “It is possibly the most enjoyable story collection ever written, a book that will frequently make you laugh out loud at its mischievous mastery, capricious ingenuity and nerve…perhaps only Calvino could have created a work that combines scientific erudition, wild fantasy and a humane wit.”

Here is a great audio version of one of the most popular Cosmicomics stories, read by Liev Schreiber for the Radiolab podcast.

All of my music for this project is modeled in some way on the relationships between characters or competing forces in Calvino’s stories, or some narrative structure or event described in the stories. In one tune, we re-enact the moment when the universe expanded outward infinitely, from a single point. In another one, we have a system of cuing each other that is inspired by the futility of communication across light-years and galaxies.

Here is a video of one of our live shows from last fall. This piece is based on the story “Blood, Sea” – which describes the moment in our evolution as organisms, when we went from being aquatic creatures that swam in a vast salty sea, into beings that walk on dry land but now have the roiling salty sea enclosed inside of us as blood.

This one is based on the story “Solar Storms”: a love story really, where a radiant solar flare travels to earth to be with her beloved, who is just trying to live a normal boring life. But her powerful electromagnetic radiation is super disruptive wherever she goes—most importantly, it messes with everyone’s TV reception in the small town where they live—so an angry mob chases her away.

The most thrilling part of these concerts will be the musicians, though—Aaron Bennett on tenor sax, Mark Clifford on vibes, John Finkbeiner on guitar, Tim Perkis on live electronics, and Jordan Glenn on drums. Many of us in this group have been making music together for almost 20 years (some more, some less), and we share a common sense of possibility, and shared experience that makes the improvised parts of the set really come alive. These guys are so versatile, so committed, so imaginative, and so strong in their musical voices—I’m so grateful to have them make my compositions come to life. I think you’ll love them, too!