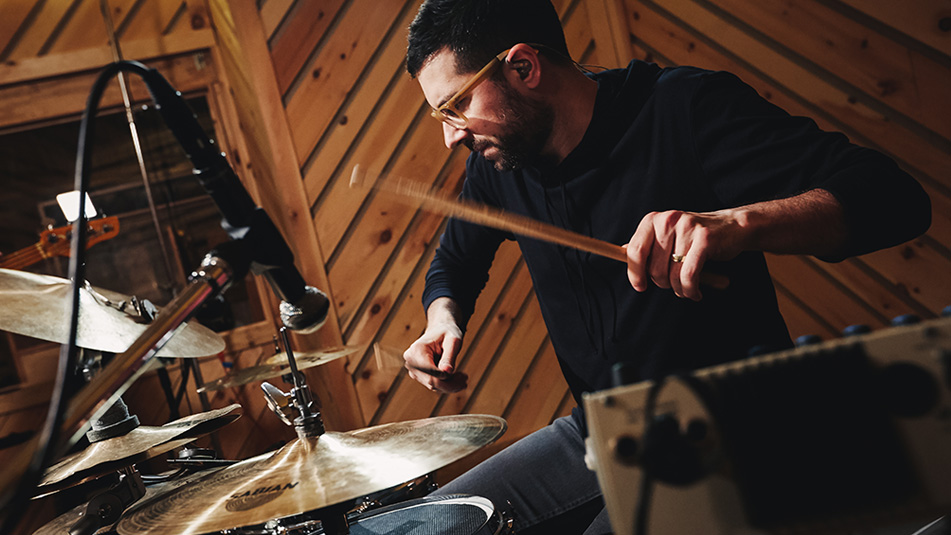 The cosmic question: How do we become who we are?

In the case of Mark Guiliana, the path has been as random as it is organic. Taking up the drums on a whim when he was 15, he was a typical Jersey kid, watching a ton of MTV and discovering Soundgarden and Red Hot Chili Peppers – and, less typically, beginning to decode the design of their drummers, Matt Cameron and Chad Smith. It was as if they were talking to him, and he was taking it in – the language of the drums, which he initially experienced as a physical sensation, like “an energy in my body,” he says. “It was an immediate `I love this. I don’t know why. I need to figure out why.’” And then he came across Elvin Jones and Tony Williams, Art Blakey and Roy Haynes – another world, jazz – followed by the electronic rhythm mazes of Aphex Twin and Squarepusher.

Over time, Guiliana – who performs Nov. 8 and 9 with his new band, Space Heroes, at SFJAZZ – began to integrate acoustic sounds and synthetic sounds, straight-ahead swing and electronic groove. He spread his wings through funk and soul (with Meshell Ndegeocello), hip-hop and reggae (with Matisyahu) and jazz (with saxophonist Donny McCaslin, guitarist John Scofield, and vocalist Gretchen Parlato, his wife). A reviewer in Jazz Times magazine once said Guiliana “sounds like Tony Williams filtered through Dave Grohl,” the drummer in Nirvana. Fair enough. Guiliana is known for a lot of things: the weight of his grooves, the stained-glass precision of his embellishments, his open-minded conception. Rather than jumping from style to style, he says, he tries to approach music with “one big mind.” Technique plus imagination begets innovation for Guiliana, who has become one of the go-to drummers in the upper echelons of improvised music. With Brad Mehldau, he forms half of the duo known as Mehliana. David Bowie hired Guiliana as the drummer for his final album, Blackstar, released in 2016. The experience of recording with Bowie has become a touchstone for Guiliana, a reminder to “put the art first. Keep your head down, keep to your vision.” Last year, he inaugurated a trio with keyboardist John Medeski and drummer Billy Martin of Medeski, Martin & Wood; they call the new project Medeski, Martin & Guiliana. Life came full circle when Guiliana collaborated with Matt Cameron, his hero from Soundgarden: “He recorded a record (Cavedweller) where he’s playing guitar and singing and he asked me to play the drums. I did my best to suppress my fandom, but he knows.”

Now 38, Guiliana is building a new repertoire around Space Heroes and plans to record the band next year. Conceptually, the group sits smack between two of his best-known projects: his acoustic Jazz Quartet, for which he composed a book of tunes for the traditional saxophone, piano, bass and drums configuration, and his Beat Music collective with its hard-edged grooves and electronic timbral fusions. “Now that I’ve put those two pillars in the ground, it’s nice to explore what’s in the middle,” he says. A quartet with bassist Chris Morrisey and saxophonists Jason Rigby and Mike Lewis, Space Heroes leans toward “an acoustic palette, but it’s a bit more experimental than the Jazz Quartet and I have some electronics that I bring along that can add ambient texture. I play keyboard on a song and sometimes Mike or Jason reach for the keyboard if they feel inspired. It’s much more open, a bit more of the `anything goes’ ingredient, which for me is essential. Especially when we’re playing every night, it’s really nice to know that kind of freedom exists.”

“Space Heroes” is not meant as an allusion to David Bowie’s “Space Oddity,” a classic from 1969. Nor, apparently, does it allude to Bowie's "Heroes," from 1977. “In no way is this intentionally linked to Mr. Bowie!” Guiliana says. “`Space’ is more referring to the space within the music. By not having a guitarist or a regular keyboardist, it leaves a lot of room to explore. We all take a bit of a heightened responsibility, and it certainly doesn’t have to mean that all the space gets filled in by default. This is my first real opportunity to write for two horns, to consider the personalities of these specific musicians, and I want to make sure I’m leaving enough space inside for their personalities to shine.”

Having completed the thought, he puts down the phone to attend to his four-year-old son, Marley, who is home sick from pre-school. In interviews, Guiliana – who won this year’s “best modern jazz drummer” award in the Modern Drummer magazine readers’ poll – tends to return to certain words and ideas: “intention” and “care” and “details” and “bravery” and “risk-taking.” He also talks a lot about “family” and “home.” The Jazz Quartet’s first album, released in 2015, is titled Family First. The second, from 2017, is titled Jersey – and Guiliana still lives in New Jersey, close to where he grew up. He mentions that having a family, rather than being a distraction, has improved his musical focus: “The attention that I can give to music is greater. Now things have a start time and an end time, whereas before maybe it was a random Tuesday and I’d tell myself, `I can work all day,’ and maybe I’m operating at 60 percent because I have the whole day. Whereas now, if I have just two hours, I’m all business and I’m really engaged and maybe I’ll find something in the music that I wouldn’t have found without that level of attention. Also, I don’t like being apart from Gretchen and our son. So if I’m going to leave the house for a week or two at a time to play music, I better really play some music.”

Guiliana’s parents – married for 53 years – liked to keep him busy when he was a kid in Florham Park, New Jersey. The drums emerged as “something to fill the time. My parents were teachers and there wasn’t any music in my immediate family, so it was a little bit of a fluke. Both my brothers were really great athletes – they played Division I baseball in college – so I’m still not quite sure where my music connection came from. The drums were just something to do.”

While his first teacher, Joe Bergamini, drilled fundamentals into his practice routine, Guiliana was into his MTV phase. In Cameron and Chad Smith, he found “relatable inspirations. The music they were playing felt within my grasp. It didn’t mean that I could play the way they played, but I could at least play my 15-year-old version of playing the way they played – kind of putting my headphones on and getting through a song. Whereas, I couldn’t do that with Elvin Jones. With Elvin and Tony Williams and Roy Haynes, I couldn’t do that. I was intrigued by those guys, but it felt like it came from another world – which, actually, it was.” 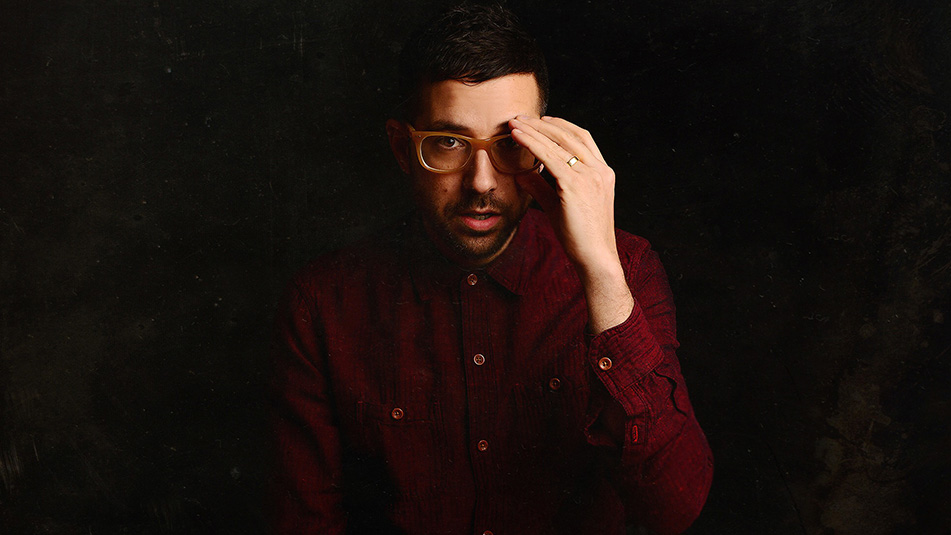 Even so, Guiliana's discovery of Jones and Williams – he has called them his “yin and yang,” his deepest inspirations – felt much like his discovery of Cameron and Smith. There was the very same “feeling in my body,” a signal that this percussive language needed to be absorbed through his limbs, taken into his brain and gradually untangled. Later in high school, Guiliana studied with John Riley, the drummer in the Vanguard Jazz Orchestra, the big band that grew out of the Thad Jones/Mel Lewis Orchestra. Guiliana saw his teacher perform at the Village Vanguard many times, and his jazz focus deepened. Only 17, he would drive into Manhattan where he also “managed to catch some of the guys on my short list, like Elvin and Roy (Haynes) and Max Roach and Paul Motian,” he says. “But I was still very much a young student trying to check those guys out. I didn’t get to play with many guys from that generation. It was really more about getting inside the records, listening to Elvin with Coltrane or Tony with Miles Davis, trying to absorb the music in the best way I could.”

In 1999, Guiliana enrolled in the jazz program at William Paterson University in Wayne, New Jersey, and kept driving into the city, he recalls, “checking out music every night, hearing the guys a generation above me. That was really my in-the-flesh jazz experience, going to places like the Knitting Factory and Tonic, hearing drummers like Jeff Ballard and Joey Baron, Bill Stewart and Jim Black, who was especially important to me.” By this time, Guiliana's listening was expanding, quickly. He was into Aphex Twin and Squarepusher. Alongside jazz, new musical possibilities were beckoning: drum and bass, jungle, acid house, a million grooves – as well as drum machines and the many programming options that were cropping up. Where to turn? Jim Black helped show the way: He “was the first guy I witnessed who really mashed together a wide variety of diverse influences,” Guiliana has said. “That gave me the confidence to develop a personal sound, one that incorporated different aspects from everything that has inspired me so much over the years.”

He had discovered his guiding principle: “I realized that in order to be myself, the important thing was to allow my influences to co-exist in the most natural way I can,” he says. “I’m still very much that 15-year-old kid who watched MTV. That music still transports me to a place in the same way that it did then, if not more in some ways. So the joy that I discovered in my early relationship with drums is the thing that I’m desperately holding on to. If I just continue to chase that, I’d like to believe everything else will fall into place.”