on the record:
Duke ellington's The Nutcracker Suite 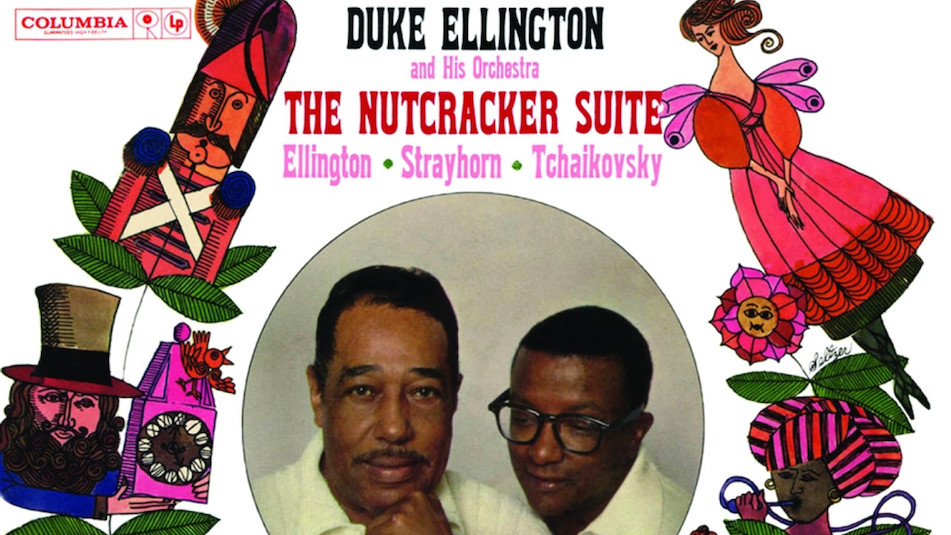 Bay Area-based jazz great Marcus Shelby returns on 12/2 with his New Orchestra and vocalist Tiffany Austin to celebrate the holidays with music from Duke Ellington and Billy Strayhorn’s 1960 album The Nutcracker Suite, featuring jazz interpretations of themes from Tchaikovsky’s beloved 1892 ballet. Here’s a closer look at this classic album, including the original liner notes.

By the time Duke Ellington recorded his holiday LP The Nutcracker Suite for the Columbia label in the summer of 1960, he had already led a four-decade career as a peerless innovator and leader of an orchestra of legendary virtuosity.
Though his fame had somewhat waned by the bebop era of the early 1950s, Ellington enjoyed a well-deserved career resurgence with the overwhelming reaction to his 1956 live date Ellington at Newport, and this renewed vitality seemed to expand his horizons still further to encompass ever more ambitious large-scale works, his concerts of sacred music, soundtrack composing, collaboration with John Coltrane and Charles Mingus, etc.

The Nutcracker Suite was Ellington’s first album-length project devoted to the work of another composer, but it’s not the only thing that makes this recording a standout in his discography. A cursory glance at the album cover immediately draws attention for its central image that features both Ellington and his longtime musical partner, composer, and arranger Billy Strayhorn — the first time Strayhorn’s image graced an Ellington cover — and for the listing of three surnames as the creators of the work: Ellington, Strayhorn, and Tchaikovsky. This equality of billing makes complete sense in retrospect — Strayhorn had the idea for the project in the first place and reimagined the suite to best suit the Ellington Orchestra — but to openly suggest that Duke Ellington was not the singular architect of his own work was an unprecedented (and overdue) acknowledgment of Strayhorn’s talent and his importance as a major figure in jazz in his own right.

Producer Irving Townsend contributed the liner notes to the original release, and in his opening relates a jaw-dropping, but completely apocryphal, anecdote about Tchaikovsky and Ellington meeting in Las Vegas — the Russian died six years before Duke was born and only traveled to the U.S. once in 1891 to conduct concerts on the East Coast — but Townsend most likely meant that it was during Duke’s Riviera Hotel residency that he made the decision to adapt Tchaikovsky’s work. Since Strayhorn masterminded the project, this is also not strictly accurate, but effectively gets us into the background of the album.

Here are Townsend’s liner notes in their entirety:

Duke Ellington and Peter Ilyich Tchaikovsky met in Las Vegas while Duke's band was setting attendance records at the Riviera Hotel. For the first time in Ellington history, Duke had decided to devote an entire album to arrangements of another composer's works instead of his own, and Tchaikovsky was the natural choice.
Because the suite is a favorite form for Ellington composition, the Nutcracker was the obvious Tchaikovsky work to choose.
Duke and Billy Strayhorn needed some reassurance that nobody, including the famous Russian composer, would mind if the Suite was translated into the Ellington style, but once these fears were banished, they attacked the “Sugar-Plum Fairy” and the “Waltz of the Flowers” as if they were no more sacred than “Perdido.”
Duke's band had undergone some changes during his Las Vegas stand, and as he arrived in Los Angeles to begin the recording, the trombone section included two Ellington alumni, Lawrence Brown and Juan Tizol, back for postgraduate courses.
The rhythm section also included Sam Woodyard, back with the band after a year's absence, and Aaron Bell, one of the fine bass players in jazz. Eddie Mullins was new in the trumpet section, as was Meringuito, and Willie Cook had returned to the band. The sax section and, of course, the piano player, were unchanged.

“Overture” — The Suite begins, naturally enough, with an overture based on the first of many famous themes Duke and Billy Strayhorn arranged for this album. Soloists are Paul Gonzalves, "Booty” Wood on trombone con plunger, and Ray Nance, playing a beautiful solo on open horn. The ensemble last chorus gives a first taste of the kind of driving band sound that characterizes the Ellington version of The Nutcracker.

“Toot Toot Tootie Toot (Dance of the Reed-Pipes)” — You will by now have noticed that titles of the various dances have undergone an Ellingtonian change. Duke and Billy devoted many hours to retitling, mainly because Duke, having adapted the Suite to his style, felt the titles were also in need of "reorchestrating." (The full title for this piece, for instance, is “Caliopatootie toot toot tootie Toot”, but none of us could spell it, so we shortened it.) It features reed duets by Jimmy Hamilton and Russell Procope and by Paul Gonzalves and Harry Carney, a toy pipe foursome if ever there was one.

“Peanut Brittle Brigade (March)” — This is one of the fine examples of the full Ellington band turning a four-sided march theme into a great jazz performance. After the ensemble, Ray Nance and Jimmy Hamilton take solos, and there is a piano solo, one of the few in this Suite. Duke devoted so much time to the band during this recording he rarely had time to sit at the piano. The ensemble following the piano interlude features a five-octave sax figure from the bottom of Harry Carney's baritone to the top of Jimmy Hamilton's clarinet, and, the March ends with Paul Gonzalves' solo to an ending that even Tchaikovsky could hear.

“Sugar Rum Cherry (Dance of the Sugar-Plum Fairy)” — This famous delicacy opens with a drum figure leading to Harry and Paul on baritone and tenor saxes. Paul continues the melody while the Ellington pep section, made up of Ray Nance and Willie Cook, trumpets, and Booty Wood, trombone, wail the background. The melody returns to Paul and Harry again and fades, and the Sugar Plum Fairy, now a West Indian beauty, disappears into the cane fields.

“Entr’acte” — The entr'acte returns to the overture in a freer form and introduces Johnny Hodges, while Harry Carney and Paul Gonzalves join in the build-up. Lawrence Brown then takes over on muted trombone a wonderfully welcome sound. Jimmy Hamilton's clarinet and Lawrence's trombone complete the intermission music.

“Chinoiserie (Chinese Dance)” — This is a duet by Jimmy Hamilton and Paul Gonzalves with the assistance of drums and bass and a touch of trombones. It is played straight, although not straight-faced, and after another piano interlude, the two soloists reverse the music and play each other's solos for the last chorus. Naturally, the pianist has the last word.

“Danse of the Floreadores (Waltz of the Flowers)” — What-ever Floreadores are, they are not waltz lovers, and this one-time waltz now jumps. Booty has the opening plunger statement. Ray Nance plays the first plunger trumpet solo, following by Hamilton and then Nance again. Lawrence Brown sails into his solo, and the danse concludes with Booty and Britt Woodman.

“Arabesque Cookie (Arabian Dance)” — Russell Procope has been practicing on a bamboo whistle for months for his debut on records. This is it, and he has made the most of it. Juan Tizol, a tambourine expert, sets the rhythmic color with Sam Woodyard and Aaron Bell, and then Harry Carney on bass clarinet and Jimmy Hamilton on the regular kind, play the Arabian Dance. Willie Cook plays with the reed section on this number, and as the Moorish flavor turns into a swinging beat, Johnny Hodges plays. The dance returns to the original for the ending, and Tizol has the last shake.

Duke Ellington's first brush with the classics is successfully completed. It is a tribute, I think, to Duke and Billy and to Tchaikovsky. The Ellington forces have proved once again that in any setting, this great band and its strong personality pervade all the music it plays. But that Tchaikovsky has also triumphed is an indication of the perennial strength of his music. As Duke commented, “That cat was it."