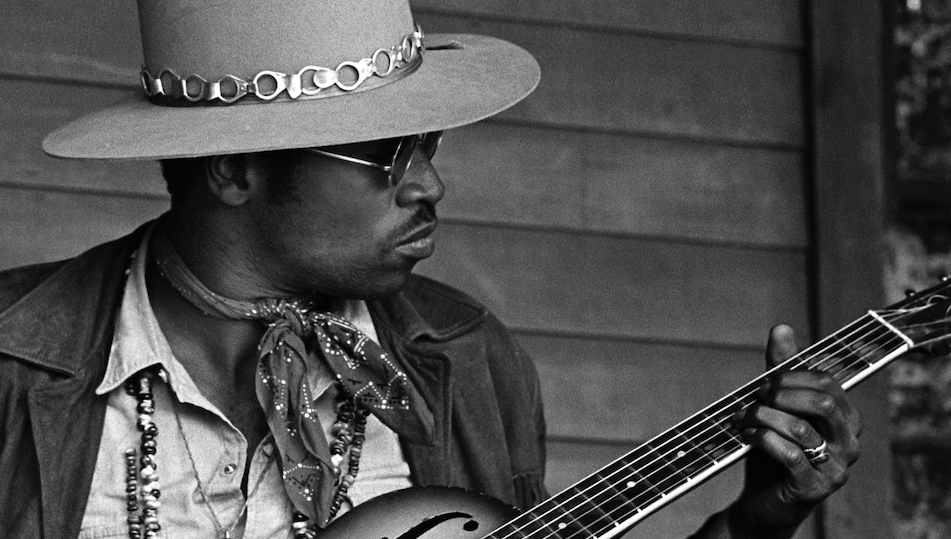 Three-time GRAMMY winner and American music icon Taj Mahal is far more than a blues artist. Over his five-decade career, Mahal has freely embraced influences from jazz and country as well as Caribbean and African traditions, creating a wealth of recordings that runs the gamut of styles and approaches. In preparation for his week of performances (2/27-3/1), we take a look back at five memorable moments from his discography.

After deciding to pursue music as a career, Mahal bounced around the Los Angeles club scene, forming the short-lived group Rising Sons with guitar great Ry Cooder. They were signed to a deal with Columbia in short order, but not knowing how to market a racially mixed band playing an indefinable mix of folk, country, rock, and blues, the label only released a single of their cover of Reverend Gary Davis’ “Candy Man” before dropping them, leaving the rest of their 1965 recording session unreleased. The band’s full-length album, produced by Terry Melcher, was eventually rescued from the vaults and released in 1992 as Rising Sons Featuring Taj Mahal & Ry Cooder.

Widely considered a cornerstone of the 60’s blues revival, Mahal’s self-titled debut album was a sensation up on its release, with a direct and stripped-down sound that jumped out of the speakers, flying in the face of the effects-laden psychedelic approach that was so prevalent in pop music at the time. This album-opening track – a re-worked version of the Sleepy John Estes classic “Milk Cow Blues” – bears Mahal’s unmistakable feel, with a distorted blues harp intro that rings out as a bold statement of purpose. The All Music Guide calls Taj Mahal “one of the most quietly, defiantly iconoclastic records of 1968.”

Never an artist to rehash clichés and always looking to music from around the world for inspiration, Mahal fully embraced reggae and rhythms of the Caribbean for his seventh release, his first to largely stand apart from American blues. The session consists primarily of Mahal originals along with covers of material by a then up-and-coming Bob Marley and influential reggae songwriter Bob Andy. This track employs Mahal’s guitar as a purely rhythmic device, with Bill Rich’s bass providing the infectious hook, along with the colorful conga playing of Ghanaian percussionist Kwasi Dzidzornu, known for his work with the Rolling Stones.

Mahal won his first GRAMMY award with the 1997 Private Music release Señor Blues, taking home that year’s prize for Best Contemporary Blues Album. The session was easily among the best of Mahal’s later career, showcasing a wide diversity of material including a country-blues take on Hank Williams’ “Mind Your Own Business,” a cover of Lowman Pauling’s “Think” (a song made famous by James Brown), and the title track – a soulful, Hammond organ laced version of Horace Silver’s timeless jazz classic, informed by the rhythms of Silver’s Cape Verdean upbringing.

Mahal first traveled to Mali in the late 1970s, and the visit left a lasting impact on his music. It’s impossible to imagine a clearer, more visceral demonstration of American blues’ deep roots in African musical traditions than this inspired collaboration between Mahal and Diabaté, the Malian master of the 21-string West African kora. On this track, Diabate’s cascading harp lines blend seamlessly with Mahal’s slide dobro, while Ramata Diakité’s soaring voice provides a lovely counterpoint to Mahal’s earthy intonations. In 2009, the Borders record and book chain asked then-President Obama for his five personal music, movie, and book recommendations, and Kulanjan was the only album on his list.

This list would be incomplete without a mention of Mahal’s most recent project, a collaboration with fellow blues luminary Keb’ Mo’ that won the 2017 GRAMMY for Best Contemporary Blues Album. Written by Sleepy John Estes, this track brings Mahal’s career full-circle, as it was originally recorded on Mahal’s 1968 solo debut album.