A Story of the Human Condition:
Terence Blanchard's Champion 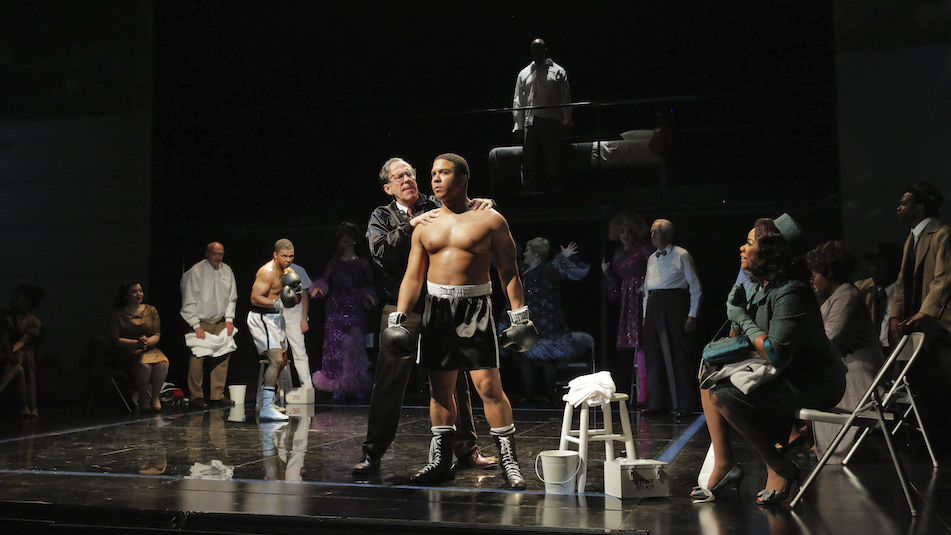 Champion performance on stage at SFJAZZ (photo by Ken Howard)

We are so excited to present the streaming video premiere of Terence Blanchard’s pioneering Champion: An Opera in Jazz on October 21, available on-demand through the 25th. SFJAZZ staff writer Richard Scheinin wrote this preview for the original performances in 2016.

With its existential struggle, inherent theatricality, and life-or-death stakes, boxing seems like a subject ideally suited for opera. From Joe Lewis’s triumph over Max Schmeling to Roberto Duran’s “no mas” surrender against Sugar Ray Leonard to any of Muhammad Ali’s major bouts, the sport has produced at least two dozen encounters that scream out for opera’s dramatic intensity. But mano-a-mano conflict isn’t what attracted Terence Blanchard to the wrenching story behind Champion: An Opera in Jazz.

A groundbreaking, genre-bending work based on the life of the closeted bisexual boxer Emile Griffith, Champion “is an opera that happens to be about a fighter, but it’s really about the human condition,” says Blanchard. Born in the Virgin Islands, Griffith was a five-time world champion whose gay-baiting opponent Benny Paret died from injuries suffered during their 1962 welterweight title match. What made the story ideal for opera, Blanchard felt, was captured by Griffith years after the tragedy. “‘I killed a man and the world forgave me. And I loved a man, and the world wants to kill me.’ First of all, I thought that was a very powerful statement,” Blanchard says. “Unfortunately, it’s still a very relevant statement.”

It’s an opera that happens to be about a fighter, but it’s really about the human condition

As a player, bandleader, composer and educator, Blanchard has been one of jazz’s leading figures since he blazed through Art Blakey’s Jazz Messengers in the mid-1980s. The five-time GRAMMY Award winner has mentored several generations of jazz stars via his ensembles and his 12-year tenure directing the Thelonious Monk Institute of Jazz. He’s composed scores for nearly three-dozen feature films, including the vast majority of Spike Lee’s joints since 1991’s Jungle Fever. Even given Blanchard’s expansive creative track record, Champion might seem like a stretch for the New Orleans trumpeter, but opera is as much his birthright as jazz.

His father was an amateur opera singer, a baritone, and Blanchard grew up hearing arias around the house. “He had a group of friends who studied with this guy named Osceola Blanchet who was teaching these young African American men in New Orleans opera,” Blanchard recalls. “So my father would come home from a hard day’s work selling insurance and he’d put on his opera records, which came in box sets with the plastic sleeves. I heard that music a lot growing up and I saw my father and his friends perform various arias from certain works.”

While Blanchard drew much of the Champion story from Dan Klores and Ron Berger’s 2005 documentary Ring of Fire: The Emile Griffith Story, he first heard about Griffith from his best friend Michael Bentt, an actor and boxer who had a brief WBO heavyweight champion reign when he beat Tommy Morrison in 1993. After losing his 1994 title defense to Herbie Hide Bentt spent four days in a medically induced coma, and he provided some key insight into the boxer’s experience. “He said, ‘T, getting knocked out in public is one of the most humiliating things on the planet.’ He was the guy who told me about Griffith and Paret years ago, and I always kept that in the back of my mind as a very powerful story.”

The emotional key to the story was identifying with a person who had achieved superlative status in his field, yet couldn’t share the moment of triumph with the person he loved.

Champion premiered at the Opera Theatre of Saint Louis in June 2013, just five weeks before Griffith died at the age of 75 after spending his last years debilitated by dementia pugilistica. Blanchard has reworked the opera extensively since then while retaining its core encounter based on an actual meeting between Griffith late in his life and Benny Paret’s son. Told by Paret Jr. that the family harbored no ill will “Emile just burst into tears,” Blanchard says. “You could tell he’d been carrying this weight for a long time.”

For Blanchard, the emotional key to the story was identifying with a person who had achieved superlative status in his field, yet couldn’t share the moment of triumph with the person he loved. When he won his first GRAMMY (for 1984’s New York Scene with Art Blakey) he turned and gave his wife a kiss “literally without thinking about it,” Blanchard says. “I wanted to share that moment with someone I love. To think that this guy who had accomplished so much couldn’t do that, it broke my heart.”