Designed To Connect: Inside The Joe Henderson Lab at SFJAZZ

Designed To Connect: Inside Joe Henderson Lab at SFJAZZ 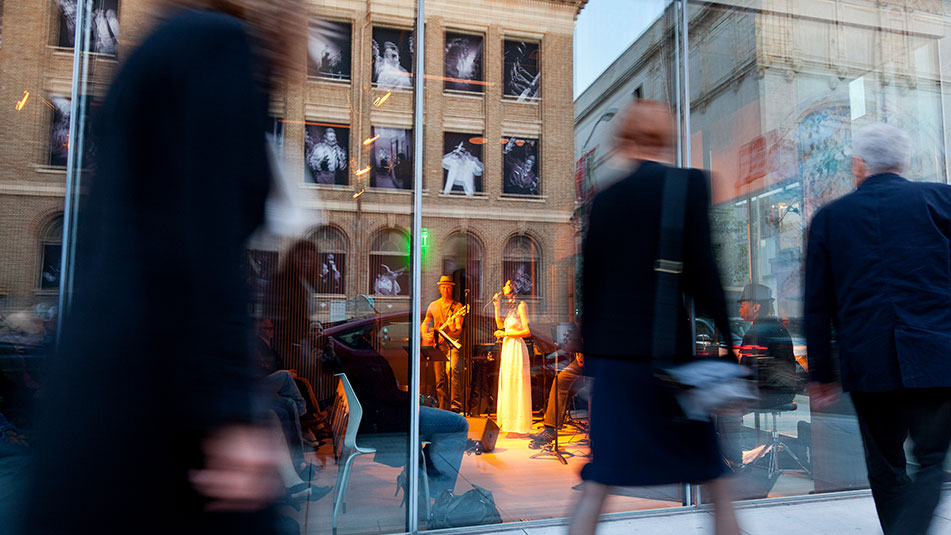 On Franklin Street, outside the SFJAZZ Center, passerby peer through the glass walls of the Joe Henderson Lab. Inside, singer Shehererazade Stone performs. Reflected in the glass is a jazz photography installation across the street from the Lab. (Photo by Henrik Kam)

When piano titans Chucho Valdés and Gonzalo Rubalcaba performed as a duo at the SFJAZZ Center not long ago, trombonist Adam Theis was among the 700 listeners in the sold-out concert hall. The performance was “enthralling. My wife and I could not believe it, and then we decided to stick our heads into the side room,” he says, meaning the Joe Henderson Lab, the Center’s other performance space, a tiny club-like venue. “I was just going to check out what’s going on, but this Cuban drummer was playing, and she was just killing it.” It was the young drummer Yissy García and her group Bandancha.

I felt like I was watching some rare YouTube video or something,” Theis says, “except it was, ‘Oh, this is happening right here.' 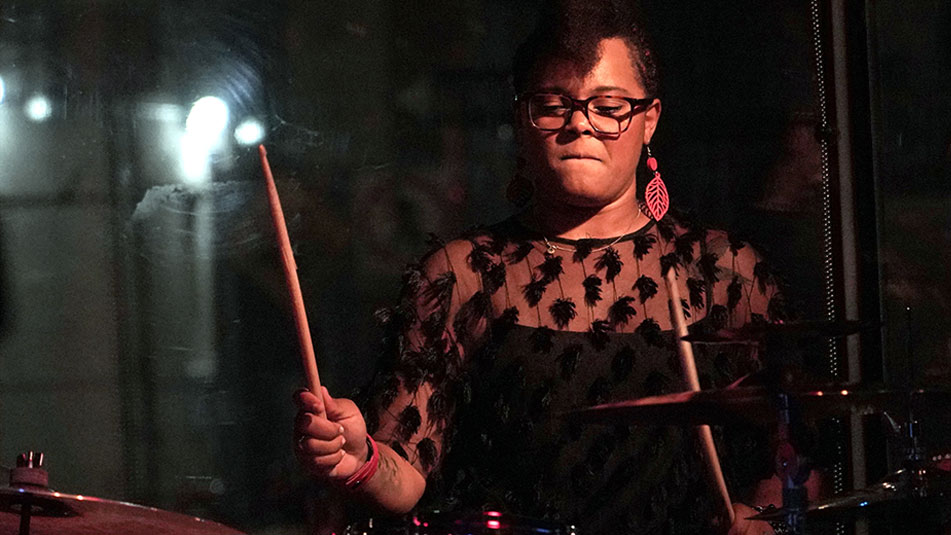 The Joe Henderson Lab – named for the late saxophonist, who lived for years in San Francisco – is a modest room, a rectangle measuring 22 by 44 feet with a small stage at one end and seating for exactly 107 listeners. When the SFJAZZ Center opened in 2013, the room was slotted as a rehearsal space for the SFJAZZ Collective, the organization’s all-star octet, and for the SFJAZZ High School All-Star groups. Gradually, though, the Joe Henderson Lab – JHL, for short – also gained traction as a performance venue, albeit a secondary one in the $64 million jazz complex, which is down the block from the San Francisco Symphony and the San Francisco Opera in the city’s busy Hayes Valley neighborhood. 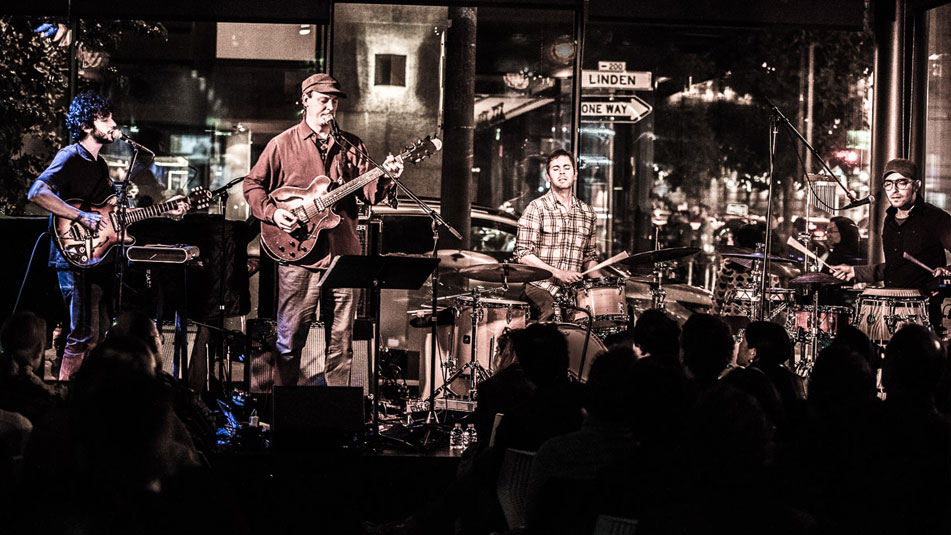 “We’re doing more with the room,” says Randall Kline, SFJAZZ’s founder and executive artistic director. “We’ve increased the weeks in there as we’ve met success. And we’re doing a little more with national, attracting some bigger things. Vernon Reid’s Band of Gypsies project in that room is going to just blow the roof off. We’ve already had some amazing things there, like (pianists) Eric Reed and Henry Butler. And Mariza” – the acclaimed singer of Portuguese fado – “saw the room and fell in love with it. In Europe, she sells out soccer stadiums. But she was attracted to the room, to the feeling on the street.” 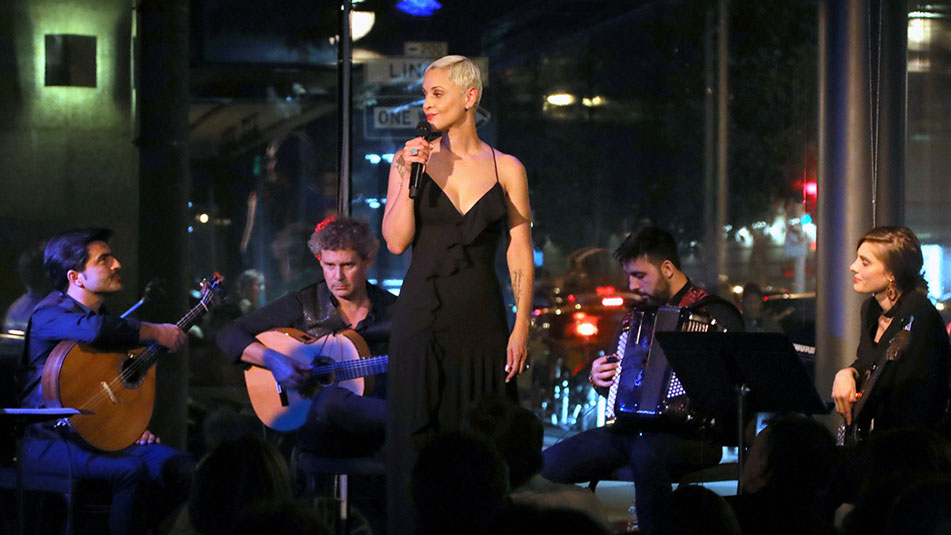 After selling out Miner Auditorum ("the big room"), Mariza asked to perform in JHL (Photo by Rick Swig)

Situated at the northeast corner of the SFJAZZ Center, the JHL is lined by floor-to-ceiling walls of glass – you can see straight out to the street, and passersby can see straight into the room. The JHL’s most unusual feature, it makes for something of an aquarium effect: “Everyone feels on display a little, which almost starts off seeming voyeuristic,” says Taylor McFerrin, the keyboardist, DJ and producer who performed four nights as a duo with drummer Marcus Gilmore.

But I find it always turns into something good. The Joe Henderson Lab has actually been one of my favorite places to play the last few years... People are really tuned in,” McFerrin says, describing the room’s “intense kind of listening environment.

It “has the intimacy of an old jazz room,” says Oakland-based saxophonist Howard Wiley, who often has performed at the JHL. “I like being close to people. I never even use the microphone in there. I like that; I like people being able to hear my full sound. When we all fell in love with jazz, it was never in a big concert hall. It was like, `I heard some jazz at this little club and the saxophone player played all damn day!’”

Pianist and organist Tammy Hall, who performed a tribute to Shirley Scott in the JHL two years ago, wouldn’t mind having a larger stage: “Things get pretty tight,” she says. Yet the tight quarters can be a good thing; she was among the lucky ones who got to see Mariza during her four nights there in 2017. She recalls how the singer “walked out into the audience, and we all got a personal serenade. She sang `La Vie en Rose’ and she was also trying out new material, really, really gorgeous. It’s like she was trying to transport us to the feeling of being in a bistro in Paris or a room for fado in Lisbon. Everyone was there for the music and the beauty – plus, there were good cocktails.” 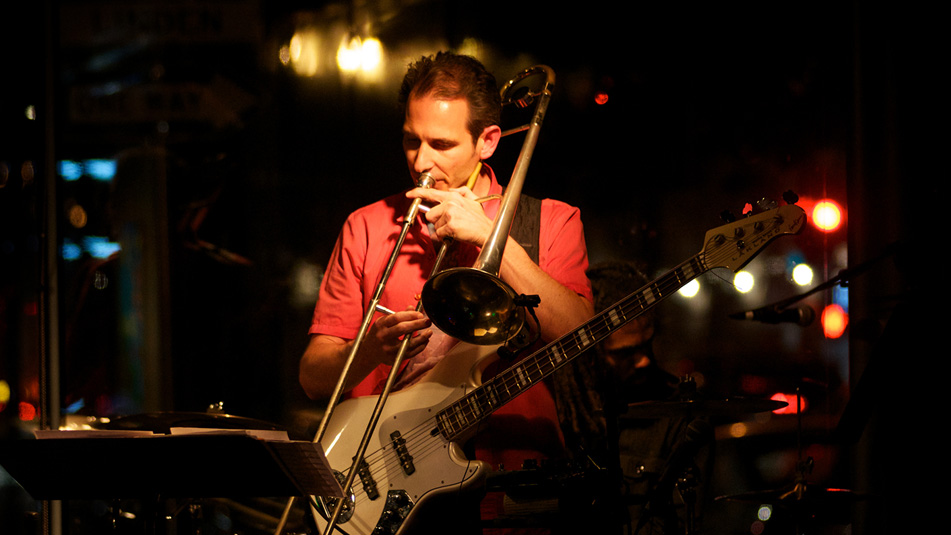 The road to the JHL extends back to around 2002.

That’s when Kline began to actively float the idea of building a permanent home for SFJAZZ, which had been presenting concerts in rented venues since 1983. The idea met with “a lot of doubt,” he says. “The question from our board, and from people who were skeptical, was, `What are you thinking? Jazz is on the downslide, not on the upswing. Nightclubs are closing. CDs are gone. The stars are dying.’ And our response was, ‘Look, the music is actually as vital as ever. And if you can create an ecosystem that can support the vitality of it, then maybe we can grow the audience.’ The idea was to attract people who like jazz and like music, but who hadn’t yet found a place where they felt comfortable, where they actually liked to go and hear a show.”

One piece of the puzzle fell into place in 2006, when the SFJAZZ Collective was in New York, rehearsing for a tour. Kline, who accompanied the band, went out for a stroll “and I happened to walk past the Alvin Ailey dance studios” on West 55th St. “It was twilight when I was walking past there and the studios were lined with glass – you could look right inside and see the dancers, the students, dancing. It was just one of the most beautiful manifestations of what we could do with our own building.”

Kline and San Francisco architect Mark Cavagnero – already working on preliminary designs for the SFJAZZ Center – had spoken about doing something unusual at the building’s northeast corner: “So I called Mark from the street and said, ‘This is exactly what we want to do.’” 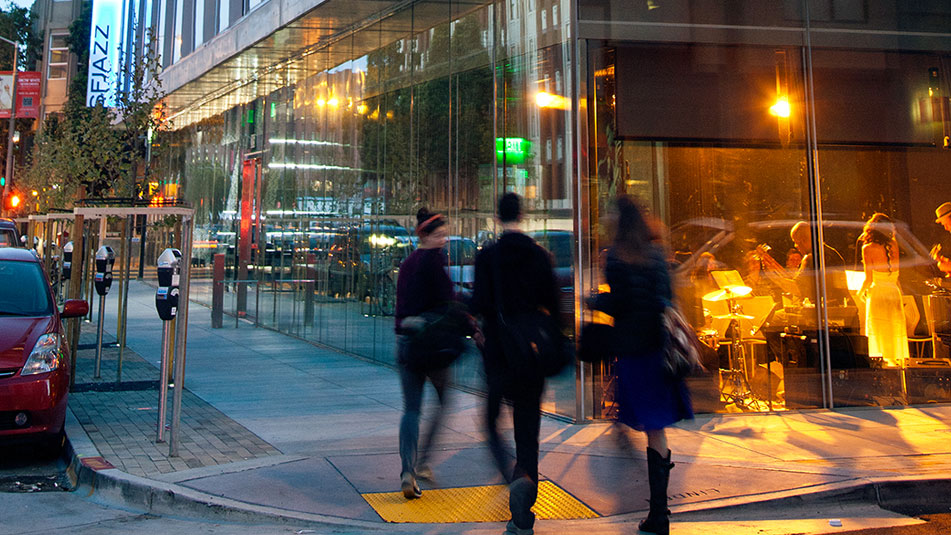 The northeast corner of the SFJAZZ Center (Photo by Henrik Kam)

Initially, there was pushback from acousticians: “They said, ‘You can’t have all that glass; it won’t work,’ and we just said, ‘Come on guys, we can figure this out.’” Which they did, yet when the room opened in 2013, Kline says, there was “still some concern about how performers would relate to it – a lot of people would come into that room and say, `How do we close the curtains?’ Well, we don’t close the curtains.”

In order not to compete with concerts in the larger hall, starting times were staggered at the JHL. Generally, the early show began at 6:30 or 7 p.m., making it easier for audience members to come straight from the office. Also, the shows were just an hour long: “People are busy and they don’t have a lot of leisure time,” Kline says, “so it’s this idea to make it a bite-sized chunk, maybe attracting a different set of listeners."

Initially, the room almost exclusively showcased Bay Area musicians: singers Paula West and Lavay Smith, drummer Scott Amendola, bassist Marcus Shelby. As attendance grew, so did the budget, allowing national acts to come through: pianist Benny Green with his trio; guitarist Rosenwinkel; and the Cookers, a septet of hard bop veterans, including saxophonist Billy Harper and trumpeter Eddie Henderson. Artists performing in the 2018-19 season range from 27-year-old singerJazzmeia Horn to vocalist and NEA Jazz Master Sheila Jordan, who will turn 90 not long before her night of duets with bassist Cameron Brown (Jan. 20). Other programs will feature Mark Guiliana, the drummer on David Bowie’s Blackstar; South African guitarist Derek Gripper, who specializes in playing transcriptions of Malian kora music (March 14, part of a week-long run of string players from around the world); and two great soprano saxophonists, Jane Bunnett (with a band featuring drummer Yissy García) and Jane Ira Bloom.

Operating in parallel to the main hall, the Joe Henderson Lab seems to have become part of the above-mentioned ecosystem at SFJAZZ. 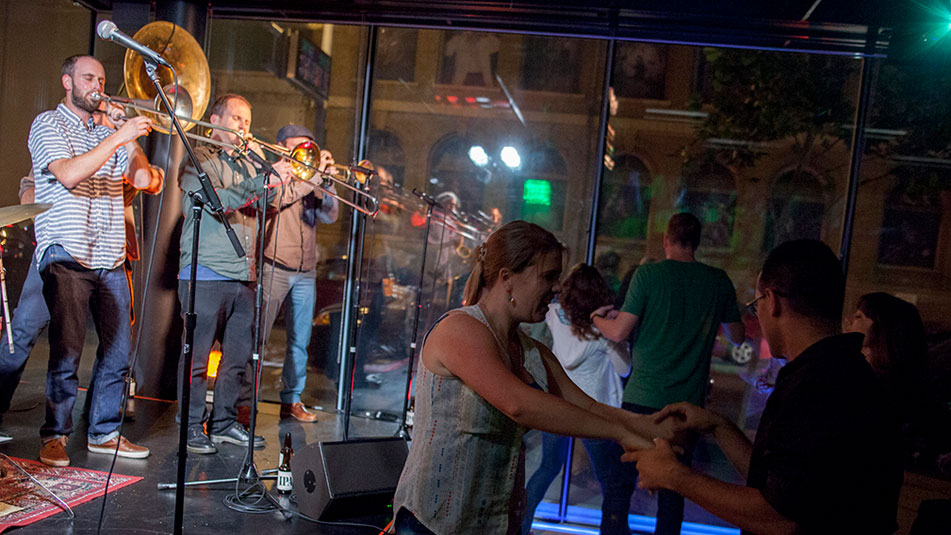 Singer Tiffany Austin has performed to full houses in the room since 2013. She ticks off what she likes about it: “First of all, the stage isn’t too high, so you’re not towering above everyone. The way things are lit, I can look out and see all the faces. I can connect with the person in the back of the room and the person over on the side. Sight lines are good; no one is craning their neck. And acoustically, no one is searching for the sounds. I’ve been in small spaces where the sound is imbalanced – voices and instruments get lost and people are disoriented and it makes it difficult to connect. But at Joe Henderson, the sound is great, every time.”

She mentions one of her heroes, the singer Kenny Washington, and a performance he once gave in a barroom in San Francisco’s Noe Valley neighborhood: “It was the first time I ever saw him sing, and you could sense this quiet romance with the music that Kenny was having. It was that intimate; you could feel it. To sit five, ten feet away from him and watch him fall in love with those songs, again and again – that’s an unusual experience. It’s what happens in a small room. You connect.”