A Life Blessed with Jazz 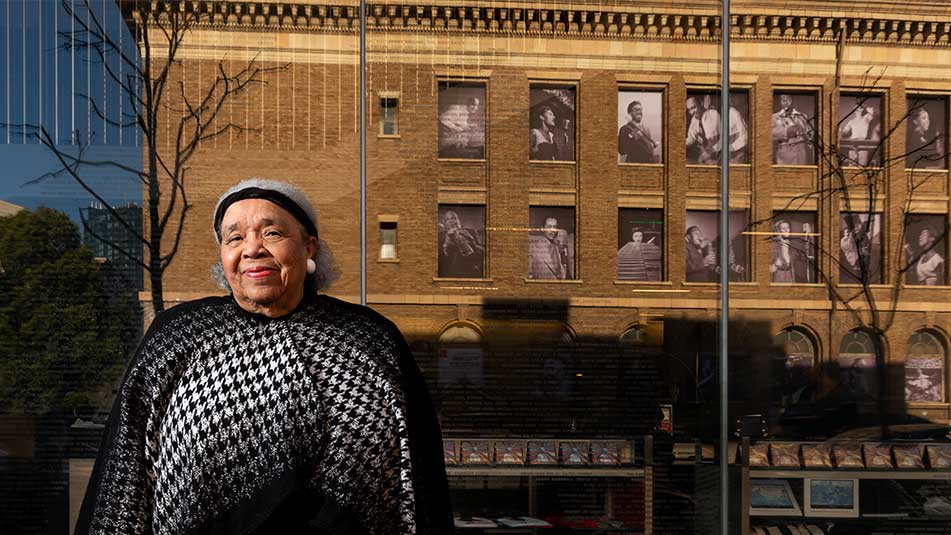 As a vocalist and former educator, I have long supported SFJAZZ because of its public school programs. Added to that is the fantastic and continuous SFJAZZ digital programming during these challenging times of a major pandemic. I have to admit that virtual jazz concerts and programs during these trying times have been tremendously soothing to my despondent soul.

Growing up in the San Francisco Fillmore District, I have vivid memories of skating around the neighborhood as a young girl and admiring the marquees featuring Billie Holiday, The King Cole Trio, Saunders King, and more. SFJAZZ has fostered this music – this national treasure – and woven it into the fabric of our city. Now more than ever, we need to keep this venue alive and well for artists to flourish when this pandemic is over.

It has been a pleasure for me to donate to the Call and Response Campaign. I urge you to do the same in order for SFJAZZ to continue on its successful journey of bringing our internationally loved and respected jazz to all of us.

Dr. Margie Baker just turned 85. The public school pensioner – who retired after 51 years with the San Francisco Unified School District as a teacher, supervisor, and director – is a devoted Leaders Circle Member. You won’t find Margie hanging around often at the SFJAZZ Center, but her connection to the organization runs deep through the history, people, and of course, the music.

It’s a story that starts in The Fillmore during World War II, but can be boiled down to her own one-sentence answer: “I appreciate what SFJAZZ and Randall Kline have done to give the music of my people the class, dignity, and respect that it deserves. And I will support it as long as God gives me the means to do that.”

Margie has known Randall, the Founder and Executive Artistic Director of SFJAZZ, since the 1970’s when he first joined the San Francisco Jazz Society. The Society was an influential group of jazz industry insiders that met monthly at the Great American Music Hall. Some of the founding members included legendary impresario Bill Graham, Riverside Records owner/producer Orrin Keepnews, and Monterrey Jazz Festival Founder Jimmy Lyons.

Lyons recruited Margie as a member, and eventually, she was elected secretary. With a Doctor of Education degree, she was well-suited to make order out of the boisterous, chaotic meetings. She was also the only woman in the Society. When Randall joined as a young concert promoter, Margie was impressed. “He demonstrated so much sincerity and a commitment to do great things for jazz. I am so glad he carried out his dreams in our great city.”

Throughout her life, Margie has had a particularly uncanny gift for being at the center of things. For someone who didn’t work in the music business – at least not until later in life – Margie counts more jazz legends and industry insiders as close, personal friends; and has done more for jazz, as a friend, sister-in-law, chaperone, secretary and public school employee than probably many in the actual jazz business.

When Margie was a child, her mother moved the family from rural East Texas to San Francisco’s Fillmore District to take work as a riveter in the shipyards at Hunter’s Point and Sausalito. In synchronicity with her coming of age, Margie’s new neighborhood blossomed around her into a district internationally famous for jazz, blues and R&B. When asked about what life was like back then, Margie lights up.

“Honey, it was just marvelous. You know what we called it? Black folks called The Fillmore “the ‘Mo,” and I loved growing up in the ‘Mo.” She spoke fondly about the diversity of the district – the Jewish, Italian, Japanese and Chinese – “and the black people who came here from the south, they worked in the shipyards. They made money and opened up those jazz clubs that rocketed the San Francisco Preservation District to world fame!”

“There were nightclubs up and down Fillmore Street, and I’d skate down Fillmore and look up at the marquees that would be all lit up. There was Billie Holiday over there, and King Cole Trio over here, and Billy Eckstine… that’s what we grew up on – including Mary.” 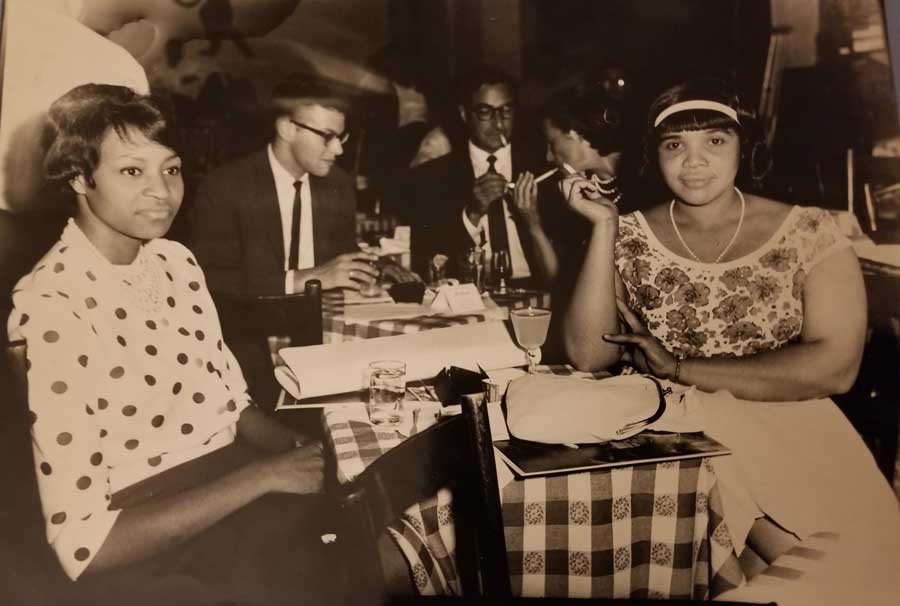 Margie and Mary spent time together at The Black Hawk – the renowned jazz venue in the Tenderloin. Its open mic and jam sessions led Saul Zaentz of Fantasy Records to record Mary’s first album. It was also there that Margie became friends with Dizzy Gillespie, and where Mary first sang with him. 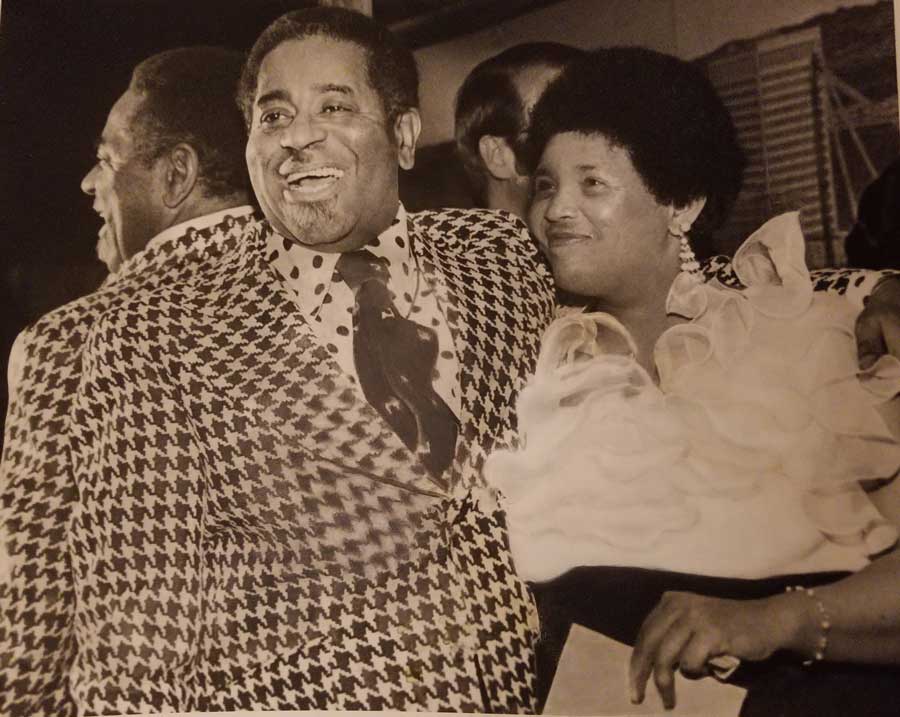 Dr. Margie Baker with Dizzy Gillespie at the San Francisco Hilton Hotel in the 1970's

Margie’s own time in the spotlight began one night in 1971, at age 38. It happened after a friend goaded her into getting up and singing at a club in the Hilton. She took the stage there on the 46th floor of the hotel and sang the one and only song she could think of the lyrics to in the moment: “I Left My Heart in San Francisco.”

Her no-nonsense, velvety voice attracted three sharp-dressed Hilton executives who approached her table. One said, “Conrad Hilton, our boss, was wondering if you’d like to work for the Hilton.”

A major factor in my support of SFJAZZ is its embracing of our school kids; nurturing their love, skill, talent, and knowledge related to jazz through its educational programming.

That began a decades-long moonlighting gig, singing standards after work one or two times a week, first at the Hilton then at several other fancy hotels in The City. Margie eventually recorded three albums and toured internationally.

But the music never took precedence over her career as an educator. Not surprisingly, Margie took music to her students and leveraged her connections.

In 1976, she brought Dizzy and his band for a weeklong engagement with the San Francisco Unified School District for the year of the United States bicentennial. “I wanted students to know the major contributions that African Americans have made to the country,” said Margie. “I called Mr. Gillespie, and he came to all 20 of my schools and gave two big concerts. He and (guitarist) Al Gafa and (bassist) Earl May and (drummer) Mickey Roker – they didn’t want to leave!”

Margie was also the 6th-grade teacher of John Santos, the Grammy-nominated Latin jazz percussionist who is a former SFJAZZ Resident Artistic Director and currently on the Board of Trustees.

“Just think,” she says with a smile, “Our great city has a world class jazz venue, that is dedicated to Afro-influenced world music and presents gifted artists of all races, creeds, and colors from around the globe. I just love what SFJAZZ does for our city and for our local artists.”