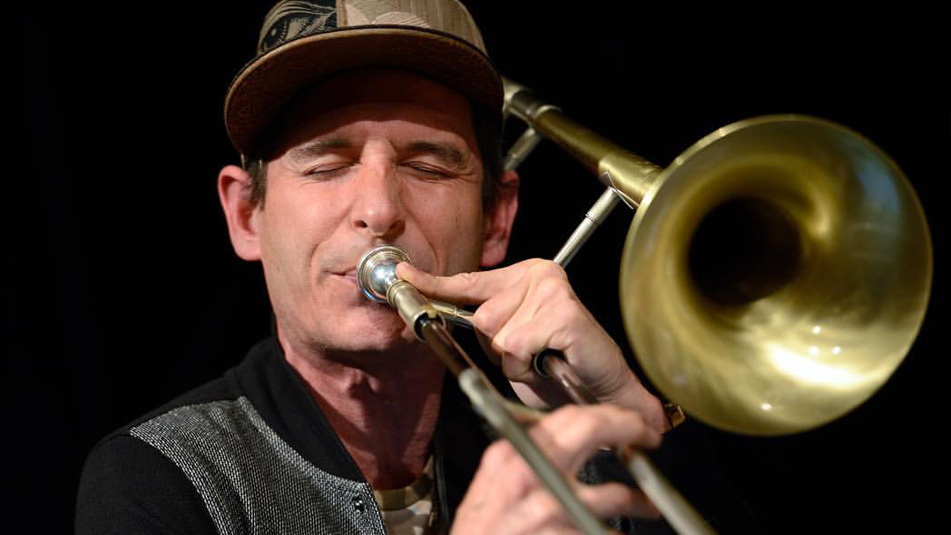 Trombonist, people connector, entrepreneur and scene inventor: Adam Theis is all those things. A one-man Bay Area music industry for 20 years, he is founder of the loose-knit collective known as the Jazz Mafia – dozens of musicians participating in the umpteen bands that have sprouted from Theis’s renegade brain. Lately, he’s been jumping on his skateboard while practicing his trombone, improvising off the rhythms of the board’s wheels as he rolls up and down a ramp in downtown Oakland: “Something will be developing out of that,” he says. “Maybe a band, maybe a song.”

Maybe something will spill over into his three nights at SFJAZZ (Dec. 7-9, two shows per night at the club-like Joe Henderson Lab), when Theis leads a Jazz Mafia Fest featuring three of his latest groups. You can expect the shows to ignore the lines between jazz, rap, funk, soul, reggae, electronica and whatever else has lately engaged him. It could be Mexican polkas. It could be krautrock. If you’ve followed the Bay Area music scene at all, you’re likely to have seen or heard at least a few of the Jazz Mafia groups led by Theis during the last two decades. They have included Cannonball, mixing soul jazz and hip-hop; the Shotgun Wedding Quintet, merging jazz, rap and electronics; and Supertaster, which once, out of the blue, backed Stevie Wonder in a packed San Francisco lounge.

There have been lots of others, including Brass, Bows & Beats, noted for taking Jazz Mafia’s hip-hop symphonies on the road: rappers, singers, a big band and a string section, plus multiple keyboards and drummers, about 50 musicians in total, performing at the Hollywood Bowl and the Monterey Jazz Festival under Theis’s direction in 2010. This fall, Theis again played the ringmaster, gathering 20 musicians for an eight-week collaboration with the aerialists and sword swallowers of the Vau de Vire Socety, a circus arts collective, performing under a tent in downtown Oakland. Now 44, Theis has worked with Carlos Santana, Spearhead and KRS-One. Unpredictable, he once played the trombone while wake surfing on Lake Sonoma. 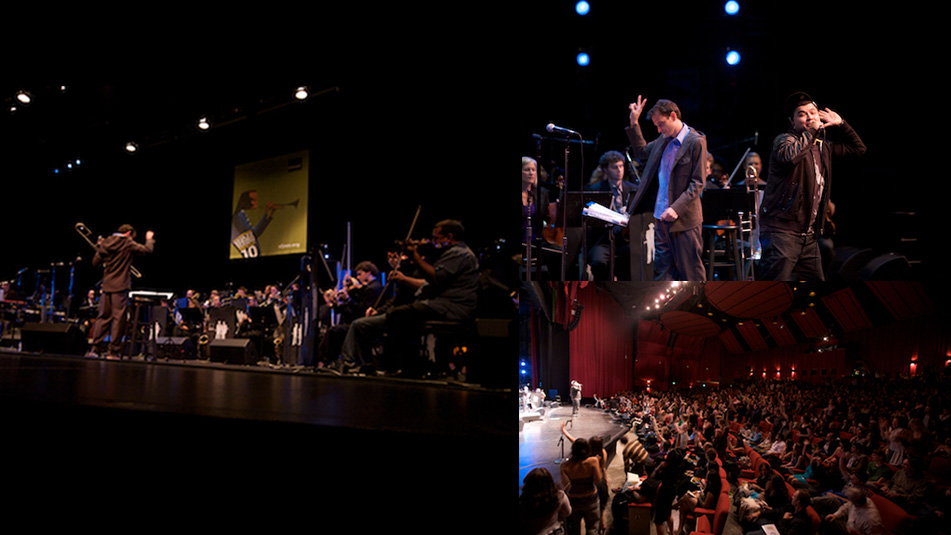 The premiere of Brass, Bows & Beats at Palace of Fine Arts, presented by SFJAZZ in 2009

During the upcoming festival in San Francisco, his 10-piece Brass Mafia band will “touch on music from basically every continent,” drawing on Balkan, Afro-Beat, New Orleans and other sources, he explains. “There’s a lot of shifting gears. We’ll go from playing Jamaican stuff to a Kraftwerk cover.” His Jazz Mafia Accomplices, also performing at the festival, will get heavy into hip-hop and vocals, while Jazz Mafia’s Heaviest Feather will spotlight three female MCs: Aima the Dreamer, Breathless and Dakini Star. They are “super-underappreciated,” Theis says, “which is pretty much the situation for women in jazz and hip-hop and the mainstream, generally.” Aima the Dreamer has worked with Jazz Mafia for more than a decade: “She’s a really fierce rapper – freestyles. She goes to the sessions with all the boys. Makes them sweat.”

Two decades into his Jazz Mafia inventions, Theis remains dead-set on creating gigs for Bay Area musicians. Still, amid the region’s tech boom and housing crunch, the music scene he has worked so hard to generate here is not a thriving one. In 2013, as rents increased and his friends left the neighborhood, he moved from San Francisco’s Mission District – Jazz Mafia Central for the 15 years previous – to Oakland, where he and his wife, violinist Shaina Evoniuk, have recovered “a little bit of that neighborhood feeling.” Even so, he must “sit down with some of my core musicians, because they’re getting really – I wouldn’t even say frustrated. It’s more like they’re terrified that they’d have to leave the Bay Area because they’re not surviving. I’ll tell them, ‘Let’s get creative. Let me help you get some corporate gigs that can help you get some money.’ It’s not rocket science. I give them pep talks.”

What makes a scene a scene? The national media can’t stop writing about saxophonist Kamasi Washington and the West Coast Get Down, the informal musicians' collective that’s coalesced around Washington over the last decade. In London, ditto: There’s been story after story about the creative jazz scene, with another young saxophonist, Shabaka Hutchings, at its center with his band Sons of Kemet – and new artists and groups seeming to emerge daily, unstoppable. 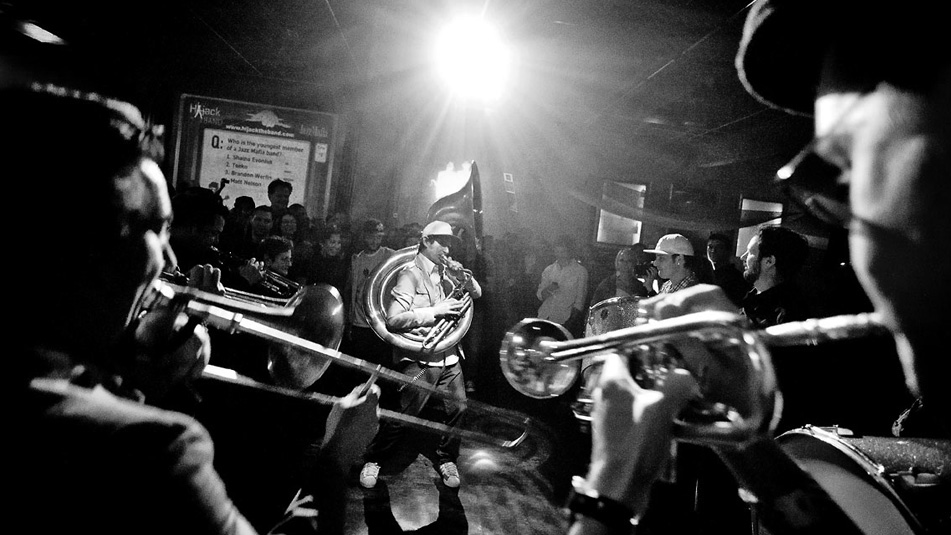 By contrast, the Bay Area fights for recognition: “It’s not lacking for talent,” Theis says. “It’s not lacking for creativity. It’s just lacking the economic structure where artists can survive. I bet you that in Detroit, some crazy stuff’s going on right now with artists being able to get spaces and form collectives. In San Francisco, folks are just struggling. There’s not many places for emerging artists to play and experiment, to try out new things. These days, if you try anything new, it’s a risk. I don’t know what the solution is. What will it take to get us on the map? The problem is there isn’t a unified kind of sound emerging, where one artist breaks out and then another breaks out behind the other one, and people go, `Yeah!’ That’s when the connection happens. You get that camaraderie and bands start doing things together and I think that really helps.”

Asked where his own connection skills come from, Theis thinks back to the communal bonfires organized by his parents when he was growing up in rural Sebastopol, CA: “Like a hundred people would come, a big hang. I always loved the feeling of ‘all these people are getting together.’ I think it’s just in my veins.”

There was hardly any music in the house. The family’s tiny record collection was built around Kenny Rogers, says Theis, who took up the trombone in fourth grade, but didn’t practice or show much promise. What hooked him was skateboarding. He became fanatical about it, founding a skateboard club and discovering that he had entrepreneurial talents. He enjoyed making flyers, holding meetings and bringing new members into the fold: “It was a need. In the ‘80s and ‘90s, skateboarding was really the outlaw thing to do and we were all joined by that,” he says. “It’s what we had in common: If you didn’t join together, you would continue to be outlaws and to be in the margins of society and not be respected. So we found out that it’s fun to get together, because you can get things done that you wouldn’t otherwise get done. We actually got a skate park built in Santa Rosa.”

Theis credits his mother – who owned a horse, riding and grooming it daily – with showing him that “you have to put in that hard work to sustain something.” Eventually, this lesson made its way into his musical practice. Theis joined the Santa Rosa Symphony Youth Orchestra as a trombonist, playing works from the basic classical repertory. He loved Stravinsky. But mostly he was “listening to punk rock and new wave, and hip-hop was starting to happen,” he recalled in a 2012 interview with this writer. “And suddenly me and my friends were jamming out, loose-knit, and there was something about it that felt really good, that we could just do our own thing, play what we wanted to play and make up crappy songs.” 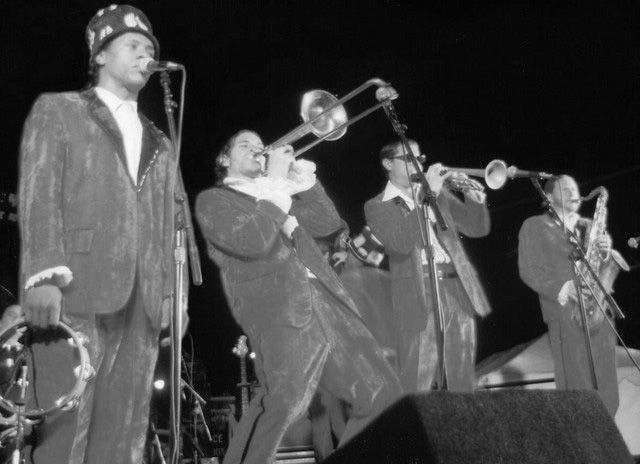 Adam Theis playing with Cannonball in 1999

While studying jazz with bassist Mel Graves at Sonoma State in the mid-‘90s, Theis would drive to San Francisco to explore the acid jazz scene, which was in full bloom. In North Beach, he wandered into a popular club called the Black Cat and discovered “the culmination of all the music I’d heard growing up: funk, soul, hip-hop, jazz.” He started sitting in on trombone and electric bass. He began to network with other musicans – and out of his renegade brain sprouted Cannonball, along with the Shotgun Wedding Quintet and a band called Realistic, thick with drums and looping. It was during “one of those nights at Black Cat, around 2000, one of those epic jam sessions, 4 a.m.,” that one of the regulars at the club, DJ Aspect, described Theis and his friends as the “Jazz Mafia.”

Now, looking back at the Black Cat – a mythic place in Theis’s mind – he is surprised that so few people seem to know about it: “It does seem like a long time ago.”

He finds that his career is in transition.

The upcoming festival is as ambitious as most Jazz Mafia endeavors have been through the years. Yet, overall, Theis says, he is “paring back, trying to compose music quicker, writing simpler songs – songs you could teach to someone in five minutes.”

As opposed to, say, a hip-hop symphony that lasts an hour and involves 50 musicians. 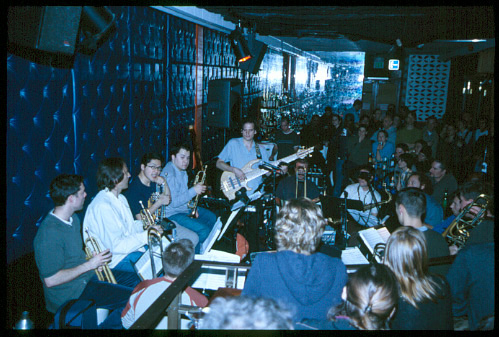 Brunos in 2003 w/ Realistic Orchestra, "which was born when we moved our Jazz Mafia Tuesday residency from Black Cat (tiny) to Brunos, which was still small, but big enough to fit a 20 piece band if we got creative" (Adam Theis)

After 20 years of one-nighters, Theis finds clubs to be “super-unpredictable” and has moved most of his activities into the studio “where ultimately you can control what you’re doing better.” He is busy as a producer and an arranger, and he is getting into video, preparing to roll out new content early in 2019. He wonders if “all this technology that’s kind of been hurting us” – e.g. driving up housing costs – “can maybe wind up saving us. Let’s use it. Let’s experiment with live streaming, do it in the studio where the music sounds amazing and looks really cool and you can stream it to an infinite number of people and keep it for posterity. If the venues aren’t out there, then we’ve got to figure out a different way. I think about it a lot.”

He also thinks about another new project, which he says will be happening “in the live realm,” meaning not in the studio. He calls it the Jazz Mafia Choral Syndicate and describes it as “an alternative gospel choir, like 25 vocalists with an eight-piece band. It’s got all the baddest singers, and we’ve done three or four gigs, and it’s been so much fun that I know it’s going to continue. I’m just trying to figure out how much and how and when,” Theis says. “How can I make things happen without losing my bank account? How can I make a sustainable living while living out the dream?”