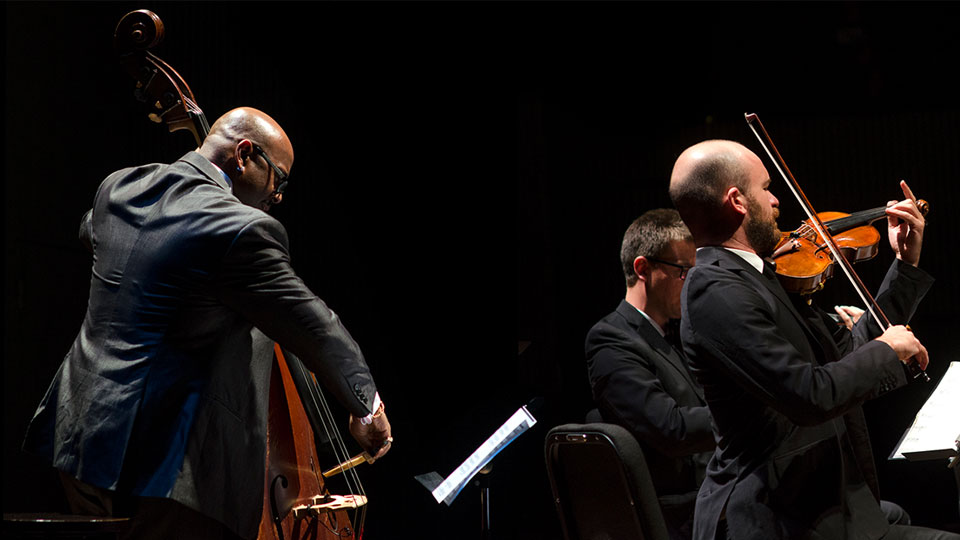 Son of Philadelphia jazz bassist Lee Smith and great nephew of bassist Howard Cooper, Christian McBride didn’t want for inspirations as a budding young musician. Though he was steeped in the jazz tradition from childhood and had developed a preternatural facility on electric bass as a youth, he entered Julliard at age 17 specifically for classical studies on upright bass. Seemingly against plan, McBride’s classical career was almost immediately sidetracked by a string of early career tours and albums with a procession of jazz giants including Bobby Watson, Freddie Hubbard, Milt Jackson, Benny Golson, as well as his peers Joshua Redman, Benny Green, and Roy Hargrove. Through it all, however, chamber music, opera, and orchestral music have remained strong, undeniable influences on him.

McBride has returned to the classical world regularly over his incomparable career, beginning very visibly with his appearance on opera diva Kathleen Battle’s 1995 classical crossover album So Many Stars. He performed on composer Lalo Schifrin’s audacious 2005 series Intersections: Jazz Meets the Symphony with Germany’s WDR Rundfunkorchester of Cologne, and a duet with violinist Regina Carter on McBride’s arrangement of J.S. Bach’s Double Violin Concerto, titled “Fat Bach and Greens,” appears on his 2011’s duo session Conversations with Christian. McBride served as Creative Chair for Jazz with the Los Angeles Philharmonic from 2006 to 2010, he performed on American soprano Renée Fleming’s 2014 holiday crossover album Christmas in New York, and he has recently been participating in contemporary chamber recordings with maverick composer and saxophonist John Zorn.

McBride has maintained a particular affection for the string quartet, having performed with the Los Angeles-based Sonus Quartet as well as the Shanghai Quartet from mainland China. He helped kick off Season 2 at the SFJAZZ Center in 2014 with performances of the complete string quartets by 20th century giant Béla Bartók in the company of the Calder Quartet, and this season, he begins his residency as SFJAZZ Resident Artistic Director with a quartet of local string luminaries and pianist Robert Koenig in an exclusive show dedicated to Dvořák’s String Quintet No.2 in G Major, Op. 77 as well as Schubert’s Piano Quintet in A Major, D.667, famously known as the “Trout” quintet.