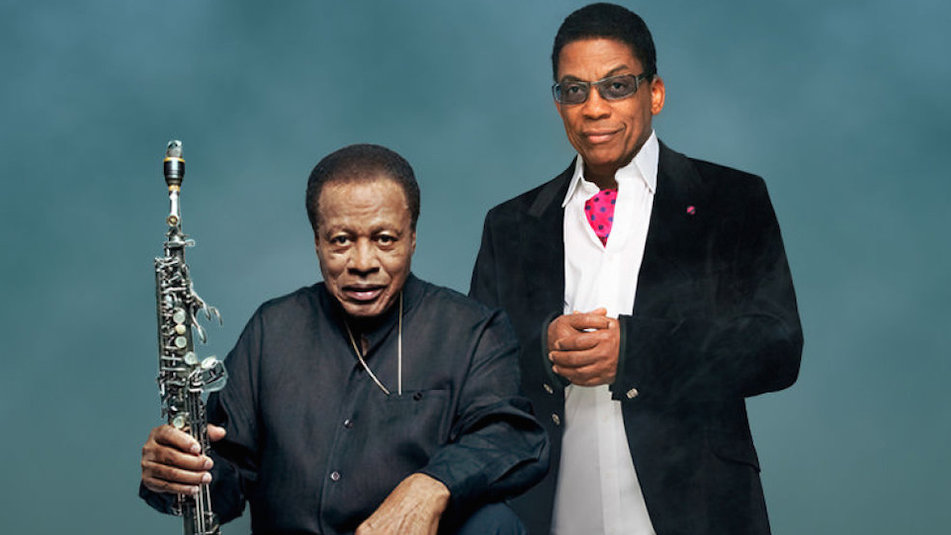 We anxiously await this week’s special Fridays at Five concert, the second installment of our Wayne Shorter Celebration series, featuring tribute organizer, friend, and jazz legend Herbie Hancock along with trumpeter Terence Blanchard, multi-instrumentalist Terrace Martin, and Wayne Shorter Quartet members Danilo Pérez, John Patitucci, and Brian Blade. To get ready for the show, here are five notable collaborations between Wayne and Herbie over the years, from their first recording together to their GRAMMY-winning duo album.

Recorded in December 1961 and shelved by Blue Note for almost five years, this release by the innovative trumpeter is the first known commercial recording of Wayne Shorter and Herbie Hancock performing together, and it’s clear their chemistry was undeniable from the start. Also featuring bassist Butch Warren and drummer Billy Higgins, the album consists mainly of Byrd originals and a pair of compositions by Hancock, who at age 20 was making only his third studio date. Wayne was the more established veteran by this time, having already led three album sessions for Vee-Jay and working steadily as a member of Art Blakey’s Jazz Messengers. Herbie wrote this ballad, “Night Flower,” which even at this early date bears the unmistakable mark of a genius in development.

This recording, Wayne’s sixth as a leader, was recorded in December 1964 at the same time he was replacing George Coleman in Miles Davis’ band — the heralded "Second Great Quintet" that also featured Herbie. Though the album was well regarded at the time of its release, its position as a major jazz masterpiece has only grown over time, to the extent that critic and journalist Ben Ratliff wrote: “(Speak No Evil is) the first taste of a gnomic compositional style that would haunt jazz forevermore. Just about everybody playing jazz born in the 1950s and after accepts it as a foundation.” The session features many of Wayne’s classic compositions, including “Speak No Evil” and “Fee-Fi-Fo-Fum.” The set-opener “Witch Hunt” and the multi-layered ballad “Infant Eyes” both figure prominently in the Fridays at Five Wayne Shorter Celebration set lists.

The fourth studio album to feature the band known as Miles’ “Second Great Quintet” with Herbie, Wayne, bassist Ron Carter and drummer Tony Williams shows a band pushing hard against the strictures of the acoustic combo format, with all the agitation and unsettled atmosphere one might expect from a living creature trying to escape its confinement. The music is unfailingly melodic, but also ragged and aggressive, with succinct solos punctuated by Williams’ brash interjections, bound throughout by a driving pulse. Miles contributed no compositions to the session, leaving the writing to Wayne and Herbie, and a lone tune penned by Williams. The tunes here are certainly some of the most memorable written by any of the musicians involved, and the evocative, contemplative Shorter composition “Fall” is heard on multiple nights of the Fridays at Five Wayne Shorter Celebration concerts.

By the time of this reunion in 1975, Herbie had evolved from the electronics-infused space jazz of his early 70s Mwandishi band to an increasingly polished funk approach with his Head Hunters group, while Wayne was working steadily with the fusion juggernaut Weather Report and recording a series of tragically overlooked releases for Blue Note and Columbia. Wayne reunited with Herbie as a horn section player, exclusively on soprano, for this slick, wah-wah guitar laden and deeply funky final Head Hunters album. Only two years later, the pair would revisit the Miles Quintet lineup and approach on Hancock’s V.S.O.P., with Freddie Hubbard standing in for Miles, but this album shows both Wayne and Herbie with a firm grasp on the rhythms of the moment. The leadoff track, “Hang Up Your Hang Ups,” was clearly the standout from this release.

The pair’s first album as a duo was a long time coming, and might not have happened at all if guitarist Pat Metheny hadn’t heard them performing a duo composition by Dutch Composer Michiel Borstlap at the 1996 Thelonious Monk Institute competition and brought up the idea of a recording. As clear an example as is possible of the pair’s singular telepathy, the album contains the Borstlap composition “Memory of Enchantment” that inspired the project, along with Shorter’s GRAMMY-winning piece “Aung San Suu Kui” named for the Burmese pro-democracy activist, and “Visitor From Nowhere,” a collaborative composition featured on this week’s Fridays at Five concert featuring Herbie, Terence Blanchard, Terrace Martin, Danilo Pérez, John Patitucci, and Brian Blade.