Fridays at Five
A Talk with Snarky Puppy's Michael League 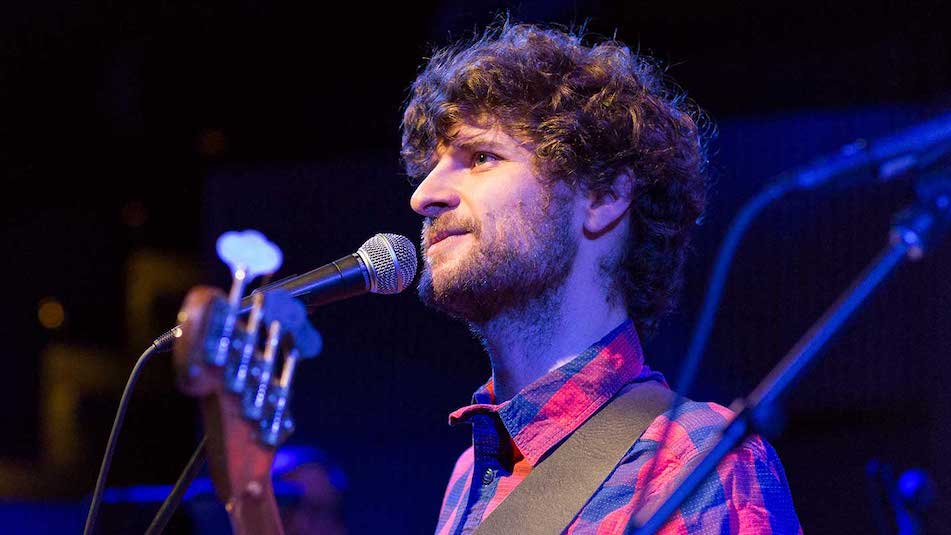 For the fourth part of his in-depth look at our streaming concert series Fridays at Five, SFJAZZ staff writer Richard Scheinin had an illuminating chat with bassist, composer and bandleader Michael League of Snarky Puppy and Bokanté. League speaks about the new reality for musicians in the time of the coronavirus and his experience as a viewer of the May 1st Fridays at Five concert by Snarky Puppy. League returns to Fridays at Five this week with a performance from Bokanté, filmed in September 2018.

A few weeks ago, while quarantined in Cádiz, Spain, Michael League tuned in to the SFJAZZ streaming concert series Fridays at Five to watch himself perform with his band Snarky Puppy. He logged in to the show — filmed a little over two years ago at the SFJAZZ Center in San Francisco — and even before the music started, he noticed a familiar sound. It was “the din of the audience before the show — that buzz, when people are waiting for something. I was sitting here with my headphones, and I pulled them off, and looked at my girlfriend, and I almost started crying. Six months ago, watching a live concert of us wouldn’t be anything. I mean, it would be cool, but nothing out of the ordinary. And now it’s wow! It takes me back to the time when we could actually stand within two meters of another human being.”

Drawn from SFJAZZ’s deep archive of videotaped concerts, Fridays at Five aims for a certain verisimilitude: the specific acoustic of the hall, the feeling of being there, and the sense that the camera is a set of eyes, zooming in on a saxophonist’s fingers or the tattoos on a drummer’s arms: “They put the focus on seeing what the people there are seeing,” says League, bassist and founder of Snarky Puppy, the jazz-fusion groove band. “There are so many camera angles. It’s constantly moving and changing perspectives — even though, while you’re performing, you’re not even aware of being filmed, which is kind of incredible. Seeing that show brought to mind how much I miss being around other people. I think this quarantine has reminded me that we’re animals, and that one of the things we need is to be in large groups. It’s like those scientific studies of chimpanzee behavior — in order to be happy and not depressed, they need to be outside a certain amount of time each day, seeing other chimpanzees. And seeing the band perform was a reminder of what I’m missing — seeing other people.”

Since launching in late March, the weekly series has presented hour-long shows by the SFJAZZ Collective, the organization’s all-star octet; guitarist Julian Lage; singer Lizz Wright; the Preservation Hall Jazz Band; Cuban piano master Chucho Valdés; and Herbie Hancock, performing in tribute to Wayne Shorter. The series streamed bassist Marcus Shelby’s 2019 performance with his quartet, three singers and author-activist Angela Davis. Through a virtual “tip jar,” their “Blues Legacies and Black Feminism” program raised about $39,000. (The funds will be split between the artists and the Black Lives Matter movement.) In the coming weeks, Fridays at Five will present guitarist John Scofield (July 10), singer Cécile McLorin Salvant (July 24), and saxophonist Branford Marsalis (July 28), among others — including Bokanté, League's other band, on Aug. 14. (You can sign up for the series here. It costs $5 per month, or $60 annually, and streams every Friday at 5 p.m. Pacific Time.)

During Snarky Puppy’s broadcast, League participated in a live chat, fielding questions from viewers about gear, the group’s constant touring, and the genesis of this and that tune in its gigantic repertoire. “I didn’t have a single second where I wasn’t answering a question, so I wasn’t really watching,” he says, adding, “It’s kind of an interesting experience — a little surreal, to converse with people about your own gig while it’s happening.” He was grateful for the diversion, though: “I actually hate watching myself on stage. I kind of can’t stand it!”

Snarky Puppy dates to 2003 or 2004 — he forgets which year — when League was trying to establish himself in the jazz studies program at the University of North Texas. He claims to have been so lacking in musical skills that he couldn’t get into any of the school’s ensembles — and decided to found his own band. “We released our second live gig as an `album,’” he says. “I printed the labels on Memorex CD-Rs in my dorm room.” A “D.I.Y. juggernaut,” as The New York Times once described the group, Snarky Puppy put out its first official album, The Only Constant, in 2006, and established itself through steady touring. League’s entrepreneurial skills were key: Concerts and recording sessions were filmed for release on DVD and YouTube, and the group’s adroit fusion of jazz, funk, rock and hip-hop caught on with a worldwide audience. In 2012, League established the GroundUP record label as a home for Snarky Puppy and friends like David Crosby, Charlie Hunter and Becca Stevens. In 2017, GroundUP established its own annual music festival in Miami. In February, just ahead of the pandemic, the festival presented a couple of dozen headliners including saxophonist Chris Potter, the funk-jam band Lettuce, trumpeter Christian Scott aTunde Adjuah, singers Lila Downs, Cécile McLorin Salvant, and Michael McDonald — and Snarky Puppy.

Many musicians have described life in lockdown as a time to re-set and get back in touch with their creative processes. For League, it was more about business realities: “I have a record label. I have salaries that have to be paid every month. There are lawyers and accountants, so I can’t just say, `I won’t be on tour for a while and I’ll save my pennies.’ I have to pay people. So we have tried to pursue solutions to this problem in a very aggressive way. When this thing started, we immediately announced almost nightly master classes on Crowdcast.” The online classes “have been awesome — not just for bringing in some kind of income, but for actually putting us in touch with people, creating a community. It’s been amazing — just to feel like every night I can be there with somebody from Snarky Puppy, and I’m not sitting here alone.” 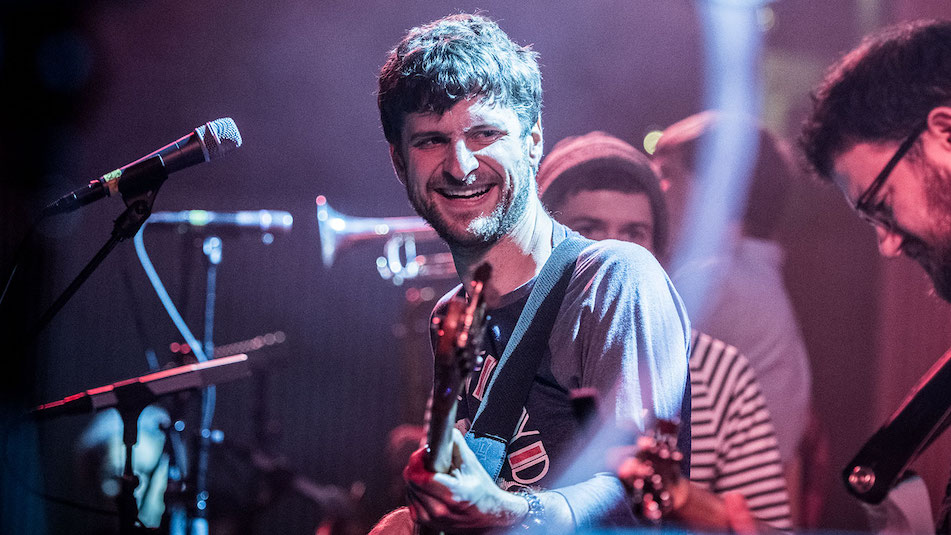 About 18 months ago, feeling fatigued by social media, League deleted his Facebook, Instagram and Twitter apps: “They had proved to be not a sustainable thing in terms of my happiness.” But now he’s ramped them back up, one small pivot in a larger business plan. Much like SFJAZZ, which began drawing on its archives as an alternative to live concerts, League is looking at Snarky Puppy’s cache of unreleased material: “And what I’m surprised by is the quantity of content we have that is just sitting there. In the course of making albums and taking cameramen on tour and filming shows and just documenting things — we just have so much stuff that’s sitting on hard drives. And I imagine that most musicians do, sitting on their phones. And I’m realizing that that stuff has value, and if it’s edited and produced and curated in an interesting way, it’s something that’s going to lock people in. We’ve got this situation, and you can’t look at it as, `Oh, this is happening now, but everything is going to go back to normal.’ I think it’s irresponsible. Maybe two years from now things will be the way they were in 2019 — except for all the businesses that have vanished and clubs that have closed. It won’t be the same. Our lives globally will be different, and whether that’s fair or unfair, we have to create solutions to problems in the long-term.”

For now, League says the band’s “global audience is healthy. I just got off a call from India, for a charity, talking to young musicians. And that kind of stuff is more important now than ever.” Snarky Puppy’s April tour was canceled: “We’d planned on doing a run in markets we’d never played before — smaller cities where they couldn’t afford the usual fees. So we were going to make this run along the Mediterranean: little cities in Italy, in France and Spain and Greece, and then some gigs in Eastern Europe — Serbia and Slovenia — and over to Turkey. It was going to be an opportunity to take the music to new places, instead of playing London for the 14th time.”

With all those shows canceled, League has gone online, holding free workshops and conversations with musicians in a number of the smaller cities. And as countries open up, he is thinking of testing the waters with some live shows this fall: “Small things, maybe some duos with members of Snarky Puppy and Bokanté. The idea is to do them in some of those cancelled places, as a way of staying connected. Because if the pandemic has done nothing else, it’s reminded us that our world is one place. It’s one community, and one person with a disease in a marketplace in China can literally change the world forever. I think that’s important to consider. We’re all occupying the same space, and I think it’s all-important that we reach out to each other.”