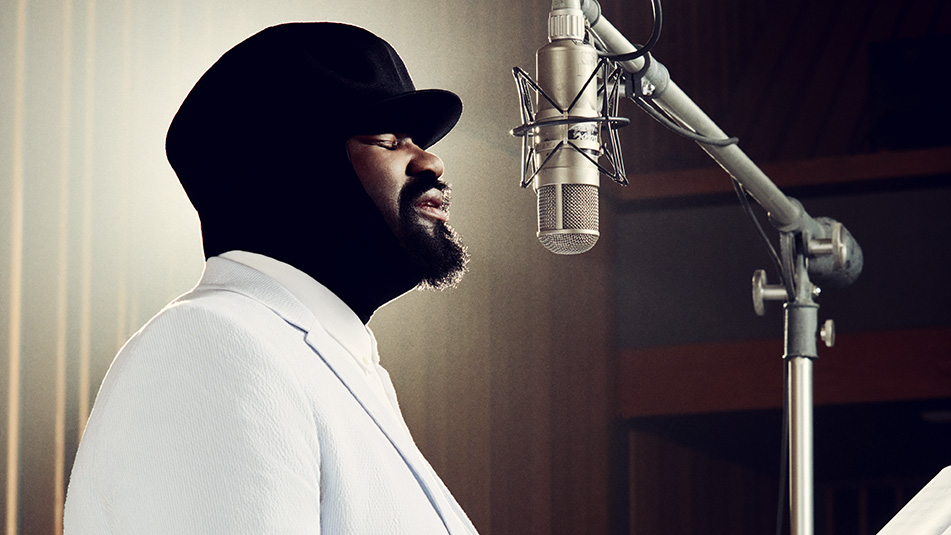 In advance of our November 27 Fridays at Five streaming concert featuring Gregory Porter, we look back at this illuminating piece written in 2017 by SFJAZZ staff writer Richard Scheinin about Porter's then-current Nat "King" Cole tribute project, Nat "King Cole and Me.

Have you heard Gregory Porter?

He is the singer of the hour, with a voice that dips and swoops and cries, always reaching back to the gospel and blues of his youth.

Maybe you’ve observed the way he stands on stage – an ex-linebacker, an amiable bear of a man – and eases into his set, moving through one after another of those deeply personal songs he composes about the irrepressible strength of love. He is preaching, really, and it doesn’t take long before the audience begins to shout back at him – something that rarely happens these days at a jazz concert. Or the crowd will sit so quietly that you can hear the silence, because his listeners are touched by the undeniable power of Porter, who learned to sing in the “dusty-board churches” of Bakersfield, Ca., where his late mother, Ruth, was pastor of a storefront mission that backed onto an alley. The family – Gregory, his seven brothers and sisters, and their mother – would pray for hours on end. “And of course prayer in the black church is not only a matter of `Our Father, who art in heaven,’” he explains. “Because you’re on your knees and you’re making these noises – it’s like moaning and wailing and praying in song,” he says, and demonstrates, his voice rising to a sanctified moan. “And it’s very musical, and absolutely that comes into my music, into a lot of the intervals and in-between-spaces of my music. It is the essence of who I am.”

You will experience that essence when Porter sings the timeless songs of his greatest influence, Nat “King” Cole, at Davies Symphony Hall on August 18, 2018, accompanied by the Bay Area’s own Magik*Magik Orchestra under the direction of Vince Mendoza. Porter will explore the songbook he’s been developing ever since Water, his debut album, was released in 2010. It alerted the jazz world to this late bloomer, now 46, whose autobiographical songs speak of bittersweet romances, along with memories of his mother and the music of his childhood – Mahalia Jackson, the Mississippi Mass Choir and, notably, Nat King Cole. He may sing about racism and resistance: “1960 What?” directly evokes Detroit in 1967, but it might as well be about Ferguson in 2014. That song – hell, all his songs – have a way of connecting to listeners regardless of whether they self-identify as jazz fans; Porter is about the big beat, hand-clapping grooves. He manages to reference an entire tradition, from Joe Williams to Marvin Gaye and the political appeals of Gil Scott-Heron. Eschewing slick productions – Donny Hathaway’s “Live” is his favorite album – he strives, as people used to say, to “keep it real,” which may explain why the songs on his GRAMMY-winning Liquid Soul have been streamed upwards of 100 million times.

I do feel some parts of my music, the timbre of my voice – it brings a certain soulfulness and healing to people.

Or it may be because Porter is such an effective storyteller. Take Me to the Alley – which won the GRAMMY for Best Jazz Vocal Album last year – recalls the alley behind his mother’s church. It was a Skid Row, where she brought her ministry to the homeless and afflicted.

Likewise, Porter’s new Nat “King” Cole & Me – on which he sings many of Cole’s hits – derives from personal experience. It turns out that Nat Cole’s music has been a marker in Porter’s life, going back to age five when Gregory composed a little song and sang it to his mother.

He croons it now:

His mother told him, “Boy, you sound like Nat King Cole,” which aroused his curiosity and sent him to her record collection. There he found a bunch of Cole’s LPs, including a Christmas album with a photo of the singer sitting in front of a cozy fireplace, the very picture of what a father could be: dapper, kind, content with domestic life. Porter – abandoned by his own father – started listing to Cole’s records and the words he sang: “Pick yourself up, dust yourself off, and start all over again.” Or this, from “Nature Boy”: “The greatest thing you’ll ever learn is just to love and be loved in return.”

Strange as it seems – and he acknowledges the unlikelihood of it all – Porter began to think of Cole as a surrogate father who sent him comforting messages via song: “You may be sick and tired, but you be a man, my son.” Over the years, Nat King Cole’s music served as both medicine and therapy for Gregory Porter. When he was suffering through a shoulder injury at San Diego State University – it ended his football dreams and pushed him toward music – he turned to Cole for nurturing. A decade or so later, when he was in his early 30s, living in Brooklyn and waiting for his big break, Porter actually composed a musical titled Nat “King” Cole and Me.

Now with the new album, he turns to Cole yet again and sings those songs – to his own son, four year-old Demyan.

“It’s a funny thing,” he says. “When you have children, you start thinking about death: `What am I going to leave them when I’m gone?’ And I like to think about Demyan playing this record when I’m no longer here. He’ll have `Pick Yourself Up’ – which was my message from Nat; I thought it was specifically for me. But now there is some messaging to my own son, without question.” 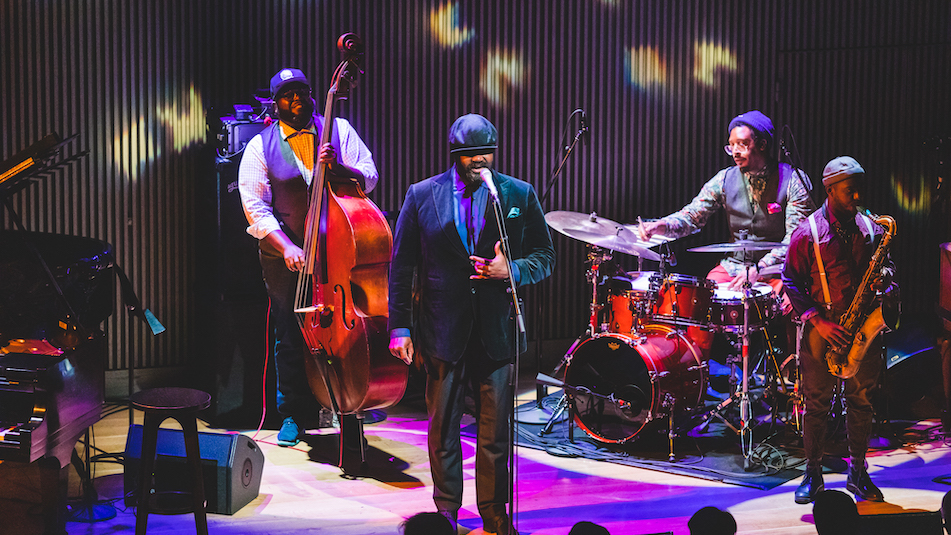 Perhaps inevitably for Porter, all that thinking about Nat King Cole, his imagined father, has put him on a journey to understand his real biological father, the late Rufus Porter. A fleeting presence during Porter’s childhood, Rufus was a preacher, a visual artist and “a little bit of a poet.”

He made his living as a house painter and Porter occasionally would get to see him working at the top of a ladder. He would look up at his daddy whose face was sprinkled with paint: “And maybe he would come down off the ladder and maybe he would give me a few dollars, or maybe he’d stay up on the ladder and, if I were lucky, I’d be spattered with paint, too. It’s a strange thing, what I was feeling: ‘Gimme some of that splatter,’” he says with a rueful laugh.

And yes, he is writing a song about his father: “A Man on a Ladder.”

While his mother remains his hero, Porter recognizes that his creative genes may have come from his father. “And that’s how I reconcile his having left – his having nothing to do with me. I’ve come to see that everything I do now is probably directly connected to him. At his funeral, I learned he had great charisma, a great singing voice – many of the things I have, come from him. So he may have given me something that’s feeding my family right now.”

With his family – wife Victoria and Demyan – Porter moved back to Bakersfield in 2015. His brothers and sisters are there, and it feels like his mother is still there. He needs to keep drawing on that essence of who he is, he says, because he is after something more than commercial success: “I’m trying to bring about some kind of love and mutual respect. I do feel some parts of my music, the timbre of my voice – it brings a certain soulfulness and healing to people. And I only say that because people tell me it’s so. They don’t say, `Man, I like your glittery pants.’ They say, ‘There’s an emotion and a spirit there.’ And that’s the way I always have received the music myself. When I first started listening to jazz, I understood the feeling. I would listen to the great saxophone players, and I would hear the voices of my grandmother, my mother and my grandfather, stylistically. There’s no getting away from the importance of this gospel-blues that finds its way into jazz music. It’s in the root.”