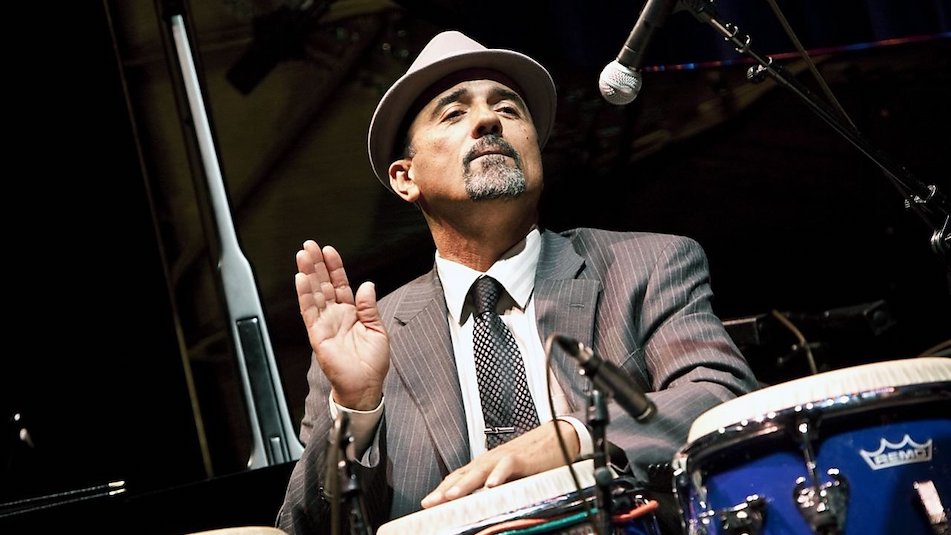 This week’s Fridays at Five streaming concert takes us back to November 1, 2015 for the 60th Birthday Celebration of Bay Area Latin Jazz luminary John Santos, featuring his longstanding Sextet and special guests including legendary timbalero Orestes Vilató, violinist Anthony Blea, vocalists Destani Wolf, José Roberto Hernandez, and Rico Pabón, and dancers Roberto Borrell and Grace Torres. The percussionist, composer, bandleader, and educator reflects on this performance from five years ago, talks about his new album, and his hopes for the future.

I am SO looking forward to re-convening our community on Aug 7th for the fabulous SFJAZZ Fridays at Five series. It is of course a deep honor to play and to be in any way associated with SFJAZZ. That has been true since we played the first Jazz in the City Festival in 1983 at the Herbst Theatre (with SFJAZZ Director of Education Rebeca Mauleón on piano) and has only deepened over the decades. Music is life. And when an organization understands that fact and goes to extraordinary lengths to honor the music, its icons, history, rising stars, its preservation, its evolution and the indispensable yet most important element—the audience—then we have the perfect storm. That is what occurs within those hallowed walls on a daily basis. It is healing, magical, empowering, unifying and terrifying to those who would divide us. We are doubly excited that our new CD, Art of the Descarga on the Smithsonian/Folkways label, is being released on the same day as the concert stream (August 7th)! The album contains new material from my Yerba Buena Gardens Festival commission.

The Fridays at Five series has become one of the most amazing unforeseen gifts to rise from the coronavirus crisis by so lovingly combining the magic of the music with the hearts of the SFJAZZ staff and the real time comments through the live chat. It provides an incredible bird’s eye view of the concert while bringing us together in a very intimate and inspiring way— different from the intimacy of us being in the same room, but extremely intimate nonetheless. Where would we be more comfortable than in our own living rooms? All of this while also allowing us to support the artists and the unique venue as generously as we can in this time of dire need. I have enjoyed the series immensely for all these reasons.

We had an unforgettable time that night in November 2015 with the Sextet and all our first-class guests. On a sad but significant note, our close friend, colleague and brother, the great Raul Rekow, SF native and conga drummer for Santana for 38 years, was supposed to play with us that night. But he was hospitalized the day before and, unbeknownst to us until the next day, passed in the hospital while we were on stage. We were thinking of him the whole night. It’s hard to believe five years have passed. These opportunities to come together and celebrate our humanity become more and more significant as time goes by.

In addition to my four-night residency that was scheduled for March 26th through 29th this year, we had a wonderful concert planned for this coming November 1st, 2020 to mark my 65th revolution around the sun, but all five concerts had to be canceled due to the pandemic. So, I have great anticipation in uniting our spirits once again with all who may have been present that evening five years ago, and any friends from around the world who would like to share this highly memorable experience with us, while showing our appreciation of music and one of history’s most important Jazz organizations, SFJAZZ. Hope to see you there!

Far more than a master percussionist, John Santos is an invaluable educator and cultural activist, a keeper of the Afro-Caribbean flame steeped in Cuban and Puerto Rican folkloric traditions as well as salsa and Latin jazz. Born and raised in San Francisco’s Mission District, he’s been at the center of the Bay Area’s Latin music scene for nearly five decades. In addition to his roles as a musician, a visionary bandleader, and a respected educator, he is a noted historian of the music and has served on the Smithsonian Institution’s Latin Jazz Advisory Committee. The City of San Francisco issued a mayoral proclamation declaring November 12, 2006 as John Santos Day.