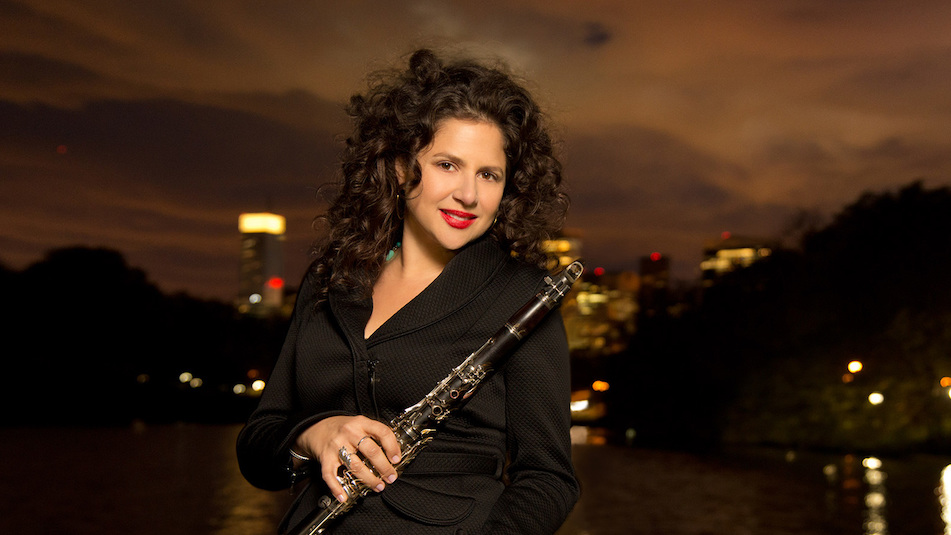 When she moved to New York in 1999, she made a name for herself as a saxophonist. But over the years, Cohen — raised in Tel Aviv — has moved ever closer to her original instrument, the clarinet, which she plays with infectious freedom. During her upcoming residency at SFJAZZ (March 23-27), she will play nothing but clarinet in three different bands: a duo with Marcello Gonçalves, the Rio-based master of the seven-string Brazilian guitar; with her Tentet, a mini-big band that runs the gamut from Goodman to unexpected rock-outs and a clarinet concerto composed by Oded Lev-Ari, the band’s music director; and her new Quartetinho, or Little Quartet, which manages to connect the dots between Brazilian folk forms and contemporary electronic sounds.

Q: I’ve read that you grew up listening to Brazilian music in Israel — but with singers singing the Portuguese lyrics in Hebrew. That sounds pretty unusual.

A: Oh, it was on the radio, always. The sound of bossa nova — and choro, as well — is apparent in a lot of older Israeli popular music. There is this sense of lament: saudade exists in the music of Israel. And when the Tropicalia movement happened in Brazil (in the late 1960s), the songs were translated into Hebrew. An Israeli musician named Matti Caspi was well known for bringing musicians from Rio, and they combined with the Israeli musicians and recorded.

A: It has to become one thing. The first time I went to Brazil, in 2000, I was standing on the beach of Ipanema and the music made sense — you listen to the birds and the wind goes through the trees. Everything has a certain pace and a certain rhythm that’s part of the music. And the sound of the language is so rhythmic and so musical.

And when I came to Brazil, I felt something about the people — the closeness, the nostalgia, and the way the people know the old songs. And they all sing together and they take out the beer bottles and make the rhythms with the spoons. There’s something very shared in the music that I hadn’t seen before — maybe jazz used to be like that. When I was getting into jazz and playing standards, the audience’s reaction was definitely not like that. Not like in Rio where you go to the club and everybody starts singing together and you feel it in your heart, like, “Oh my God!”

I came home with a greater sense of what music is — the power of music, its power to unite. 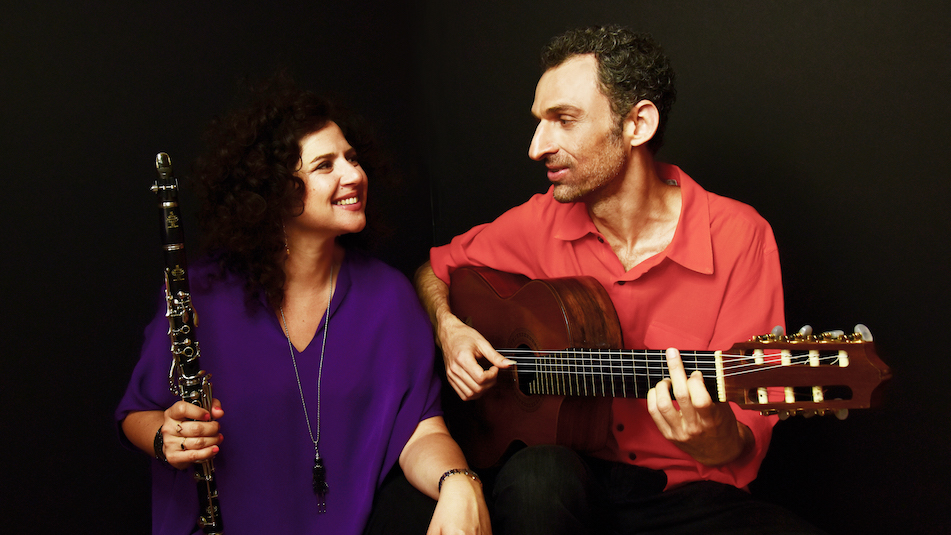 Q: How did you meet Marcello Gonçalves?

A: I met him during that first trip in 2000. When I came to Rio, I stayed with my friend Daniela Spielmann, a saxophone player. We’d met in New York, and she said, “Stay with me at my place in Rio.” She was single. I was single. We were like two nerds, man, playing choro all day. And she was one of the main cats in Rio, always playing gigs. So she would go out to play and I would go with her, and I sat in with everybody.

And Marcello had a band with Daniela: Rabo de Lagartixa, the Gecko’s Tail. I would just sit in with them and do their gigs. You see, in the early 2000s in Rio, all these young people were playing choro — these were my peers, everybody hanging out and playing all day and every day. In New York, I was known as a saxophone player. In Rio, I just brought my clarinet and people just knew me as the Israeli clarinet player who played choro. I thought, “This is amazing. It’s challenging, it’s fun, and also I can be a jazz musician — I can improvise to it.”

Q: Years went by before you formed the duo with Marcello. How did it happen?

A: It was Marcello’s idea — Marcello is the suggester. I planned to visit Brazil at the end of 2015, and he sent me an email, and the email said, “I have a dream. I want to record the music of Moacir Santos — just your clarinet and my seven-string guitar.”

And when I got to Brazil, he put the music in front of me, and I felt immediately connected to the melodies. You know, Moacir Santos was an incredible composer. So we recorded a few things. Then we listened to it the next day, and we’re looking at each other, and we went, “Wow!”

Q: What made it special?

A: The intimacy — the way that Marcello made the arrangement to open up something so jazzy. It’s a combination of my love for Brazilian music and Brazilian roots, but then it’s also real jazz, and you can lay back and give it that bossa nova approach. The funny thing is, that first day we only did a few songs, and I was going to Bahia, to the beach. So I went and had fun on the beach, and he figured out the rest, and I came back and we finished the album.

Q: Where did the two of you record your latest album, Reconvexo?

A: In Rio, during the pandemic. Marcello works a lot with the top singer-songwriters of Brazil, and most of the songs we do are from the Brazilian songbook. He made the arrangements — songs by Milton (Nascimento), Caetano (Veloso), Gilberto Gil, Jobim. The idea behind it is the beautiful Brazil, the Brazil that has so much to offer. Because there’s so much madness happening in the world right now, so much negativity. But this is about Brazilian beauty: Look in the mirror and see the beauty.

Q: Okay, you and Marcello will perform as a duo on the first night of your residency in San Francisco. Then comes the Tentet — when did you last see each other, all the members of the group?

Q: How did the band come together?

A: The original idea was that 100 years had passed since the first recording of the clarinet in jazz. And we put this group together to play 100 years worth of this music — but many types of music that I enjoy, from classical music to the Balkans and jazz and funk, and to have everything go around the clarinet.

And then we were thinking, “How can we create a flexible ensemble?” So Oded (Lev-Ari) made some suggestions about instrumentation, to expand the possibilities.

Q: For people who don’t know, Oded is the band’s music director. He’s also an old friend of yours. You went to high school together in Tel Aviv — and you run your record label together, Anzic Records.

A: Yes. It’s almost like we share one brain after so many years. And we both wanted Vitor (Gonçalves) for the Tentet, because he’s a piano player, but he also plays accordion. And we thought of James Shipp, who plays percussion, but also vibraphone. And Oded and I both shared the idea of incorporating the cello inside the horn section.

We just experimented: “Hey, guys, let’s get together and play. If it feels right, we’ll keep going.” Basically, I wanted to see if people get along with everybody. For me, it’s very important that people like each other and want to hang out. So we did a workshop in Brooklyn, and I brought coffee and bagels. And then the people arrived, and it was almost like magic in the first moment. Everybody just liked each other and the music became more flexible and it morphed.

Q: There aren’t many jazz groups that play concertos.

A: It’d be great to play it again, damn. We’ll see what happens.

Q: Your residency ends with your new band, Quartetinho, or Little Quartet. Its members are also in the Tentet, but, from what I gather, something different happens in this smaller band. Describe the music.

A: The sound of this group leans a bit more to chamber music, though still with folkloric sounds, and it’s a little bit electronic, too. It’s just the idea of experimenting — something different to explore. I wanted to play something different — though the four of us share a love of the Brazilian songbook, too.

Q: Tell me about the other members of the group.

A: Vitor Gonçalves is the pianist. I met him in Rio when he was like 20, or maybe even still a teenager. He was playing in a band led by Itibere Zwarg, the bassist who has played for many years with Hermeto Pascoal. Vitor always reminds me of this story: I sat in and we played “Green Dolphin Street” and now, years later, Vitor is in this new band with me.

He lives in New York now, and he’s sought after as a pianist, but he also is getting a great reputation on the accordion, which he plays in very adventurous ways. He plays it in my choro band, Choro Aventuroso. He can also play saxophone and trumpet, and he knows a lot of songs and really goes to the source, especially with the Brazilian rhythms, and is creative and swinging. He really has it down.

Q: What about James Shipp?

A: I’ve known James for 20 years. Like all these guys, he has a lot of different sides. He’s a singer-songwriter. He studied jazz vibraphone; he comes from the jazz world. But he’s also a percussionist, very creative and experimental, and he loves to add the electronic sounds, the samples from the keyboards. He brings lots of colors and creativity and humor.

A: Yes, though he comes from the north of Israel. He’s the youngest member of the band, and he is a bundle of talent. There’s something so raw and natural about his playing. His background is classical guitar, and he picked up the bass, and everything he plays is super-melodic. We have this little Israeli connection; there’s something about his melodic aesthetic that I relate to.

Q: What’s the repertory? What tunes will the audience hear when Quartetinho plays in San Francisco?

A: I don’t know exactly. But we made an album in October; it’s coming out this year. We did a couple of Brazilian songs, and I wrote a couple of new pieces. James brought a song and Tal brought a song. We even did something by Dvorak. Like I said, it’s an experiment, something different.

Anat Cohen’s SFJAZZ residency begins March 23 with a listening party, moderated by Randall Kline. She performs March 24 with Marcello Gonçalves, March 25 and 26 with her Tentet, and March 27 with Quartetinho. Cohen also leads a special family matinee performance on March 26. Tickets are available here.