A Q&A with Chris Potter:
His Big Band Fascination 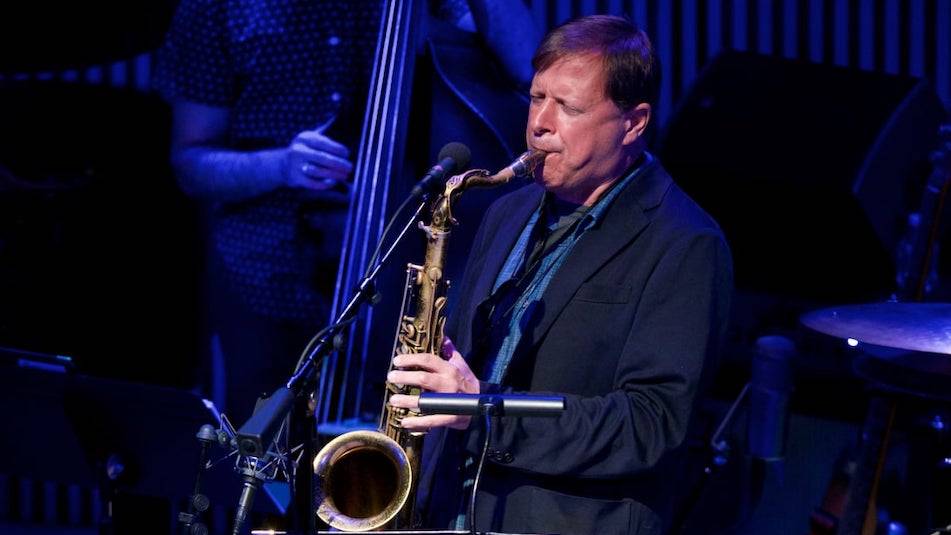 Since childhood, saxophonist Chris Potter has been enamored of big bands — their collective power and orchestral possibilities.

He remembers hearing Duke Ellington’s Queen’s Suite for the first time, and being bowled over: “There was just the richness of the colors, you know, from all the members of the band. And the way it was orchestrated was amazing — the compositional clarity, but also just the jazzness of it, the looseness. It was completely new to me. Each piece had its own feeling, and each member of Duke’s big band had his own sound. And when I heard that, I just fell in love with it.”

Ellington and Billy Strayhorn — Duke’s genius collaborator — have been his lodestars, along with Gil Evans. And like all worthy musical guides, they have inspired him to find his own compositional style, which is luminous. Over the years, he has recorded a number of albums for big band and other large ensembles. On each, he arranges beautifully detailed panels of sound that seem to float past the listener, evocatively, almost cinematically, while rhythm sections roil and Potter unleashes his titanic saxophone solos.

He has now composed an evening’s worth of original music for a 19-piece big band — to be premiered March 17 and 18 at SFJAZZ with an all-star lineup that includes vocalist Gretchen Parlato. Part of his weeklong residency in San Francisco, it’s a project that was on Potter’s drawing board for several years. “I was always fighting for time to do things,” he explains. “But during the pandemic, I got to slow down and really focus. Because even thinking about getting some large-ensemble music played — that’s a real challenge. And now with this residency, I can actually do it.”

This is the first time that Potter has included a singer in one of his big band projects, and, in Parlato, he has an exquisite voice to interpret the words of “Sing To Me” — the tentative title for his new song cycle. It begins and ends with songs for which he is the lyricist. In between, he has set verse by Paul Laurence Dunbar, the great African-American poet and novelist of the late 19th and early 20th centuries; Kabir Das, the 15th century Indian mystic; Sappho, the ancient Greek poet; and Edna St. Vincent Millay, the Pulitzer Prize-winning bohemian poet of Greenwich Village in the early 20th century.

One of the most commanding players of recent decades, Potter will solo on tenor saxophone throughout the seven-song cycle. It should be a tour de force. Potter’s rhythm section includes four of his frequent collaborators, among the most creative improvisers in New York: pianist Craig Taborn, guitarist Adam Rogers, bassist Reuben Rogers, and drummer Eric Harland. (On March 19 and 20 at SFJAZZ, Potter will introduce a new quartet that includes Taborn, Harland — and bassist Dave Holland, who helped bring Potter to prominence in the late ‘90s.)

With Chris Potter, there’s almost too much to talk about. He’s played with everyone from bebopper Red Rodney to Steely Dan — and he is the new music director of the SFJAZZ Collective, which begins a national tour on March 23.

We focused on his big band fascination, but began with his early musical memories. 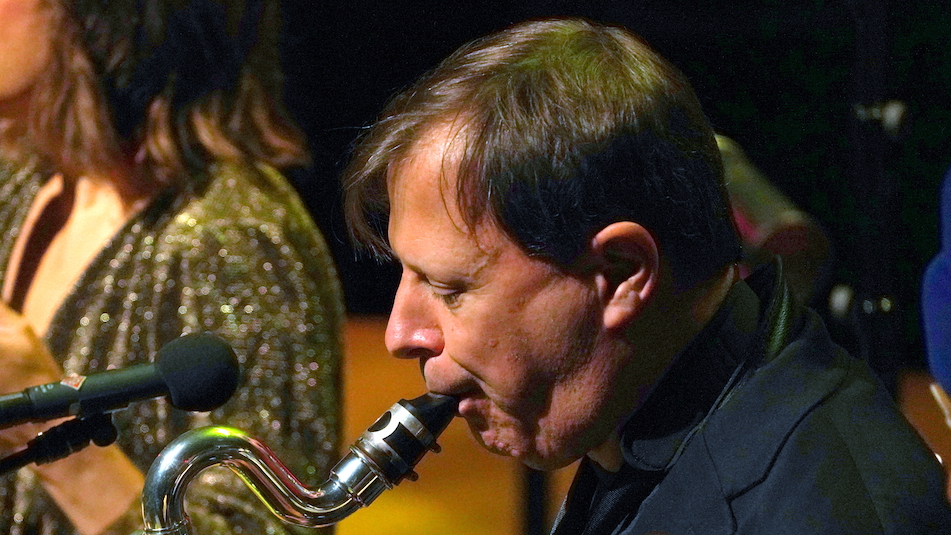 Q: Can you remember getting hooked by music as a kid?

A: It always got me — the Beatles when I was six or seven. I memorized every note. And then there was this album my parents had of Buddy Guy and Junior Wells, and I did the same thing with that. And then when I started to play, when I was like 10, I just had that need to communicate, to express something that I couldn’t maybe express in words.

Q: That day when you first heard Ellington’s big band on the radio, which of his players caught your ear?

A: All of them: Jimmy Hamilton, Johnny Hodges, Paul Gonsalves, Cootie Williams. And Duke himself as a pianist was a very important and special voice. But it was really the way that all these sounds blended or even didn’t blend — the way they stood out as separate, while still playing together. There was such incredible magic there. But that’s the kind of thing that’s very difficult to do without playing many nights together, over the course of many years on the road. The same with Miles’s quintet — you can hear that they developed a language just by playing night after night

Anyway, If you’re going to write for big band, I think, you’ve at least got to make an effort to understand how Duke achieved that magic. And Gil Evans — he was always important to me, too. I’m trying to draw on those lessons, those examples, but without trying to sound like them. I don’t think this new piece stylistically would ever be mistaken for Duke Ellington.

Q: How else have you immersed yourself in the language of big bands?

A: As a saxophonist, I really don’t feel that I have an intuitive grasp of what it feels like to play in a symphony orchestra. But I do have an idea of how the big band works and how it feels to play in one, by hearing it from the inside.

I kind of got the language by just playing in them, even in high school. And when I got to New York in 1990, I had all kinds of gigs, like playing weddings, and sometimes they’d hire a big band.

I’m also fortunate to have subbed way back in the day for the Village Vanguard band, and I actually had a chance to play some of the original Thad Jones and Mel Lewis charts. All of these experiences add up. Of course, I’ve played with Dave Holland’s big band. And I spent several years with the Mingus Big Band, which was a fantastic experience, a different approach.

Q: You once told me that Joni Mitchell sat in with the Mingus Big Band when you were with it.

A: She did. She sang “Goodbye Pork Pie Hat.”

Q: Why did you decide to include a singer on this new big band project?

A: It’s been in the back of my mind for a long time. When I was in high school, I wrote almost a whole album’s worth of pop stuff that I actually sang — and which will never see the light of day for very good reason!

But I’ve always been interested in how lyrics interact with music to amplify the meanings. And I’ve always been drawn to singers. Hearing a great singer perform is a powerful thing — just the direct connection with the body and the sound of the voice. A few years ago, I went to see Stevie Wonder who was doing all his songs from Songs in the Key of Life. And I went twice. It was just outstanding — his voice, his level of comfort, his connection with the audience.

Q: Why did you choose Gretchen Parlato for your project?

A: I just thought she’d be perfect for it, because she’s a musician kind of singer. She reads music. She has a lot of experience blending. I felt that I just needed someone I could talk to and deal with like another instrumentalist. And I can imagine her sound on it.

Q: What adjectives would you use to describe her voice?

A: There’s a certain kind of calmness and peace to it. She doesn’t necessarily use a whole lot of vibrato. I can imagine how that will fit well with everything.

Q: Let’s go over the verse she’ll be singing. It starts with your own lyrics.

A: Yeah, I’ve written the lyrics for the first and last songs. They’re titled “Sing to Me” and “Now You Have Heard.” And in between there are five poems — poems from the public domain — that I’ve set to music.

Two are by Paul Laurence Dunbar. One is called “Invitation to Love” and it starts with the words “Come when the nights are bright with stars. Or come when the moon is mellow.” I just liked the sound of the words. I chose poems where the words suggested a song, where the meanings resonated with me and I felt I could do something with it.

Q: What’s the other poem by Paul Laurence Dunbar?

A: It’s called “We Wear the Mask” and you have to assume he’s talking about racism. He’s saying that “we wear the mask that grins and lies.” It’s kind of a dark poem and it could be applied to any situation, to anyone in society — where you wear a mask to pretend you are someone you’re not.

Q: Are you a big poetry reader?

A: I enjoy poetry. It would be great to use a Shakespeare sonnet here, but it kind of leads you into a stylistic direction. The syntax alone would be a challenge to make it swing.

Q: Describe the other three poems you’re using in the song cycle.

A: The poem by Kabir has a very spiritual, mystical sort of atmosphere. I’d say the Sappho poem has the point of view of choosing beauty over a safe, boring life. And then there’s one by Edna St. Vincent Millay. It’s called “Weeds,” and it’s kind of about things that people don’t value that may actually have the greatest value.

Q: Is there a through-line to the song cycle — any one narrative theme?

A: Not really. If anything, I was looking for a little bit of an overview of the human experience, some different points of view.

Q: How do you go about composing for a 19-piece band? How do you keep all the voices in your head?

A: Well, first I wrote the songs — the basic melodies with the harmonies, and then I started composing from there.

Q: You work things out at the piano?

A: Generally, yes, especially harmonically. I don’t really have a method. It’s more like, “How does this go together? What’s going to be the best setting for this melody and this mood, and then what happens? What happens next?” Should it be a solo section or a tutti thing? Should it go into a chorale? Or should it get kind of free? And you follow the thread of what it wants to be, and you go through moments where you have no idea of where it ought to go. But somehow you keep following it and you end up with something.

I also end up throwing a lot of stuff away. So I like to leave myself enough time when I’m writing something that’s going to be performed. Things have to marinate and sometimes you go down some dead ends.

And after all this time, I’m just excited to hear it and hoping it all works. Whenever you have this many moving parts, you hope you’ve considered everything that’s important and that it’ll come out great.