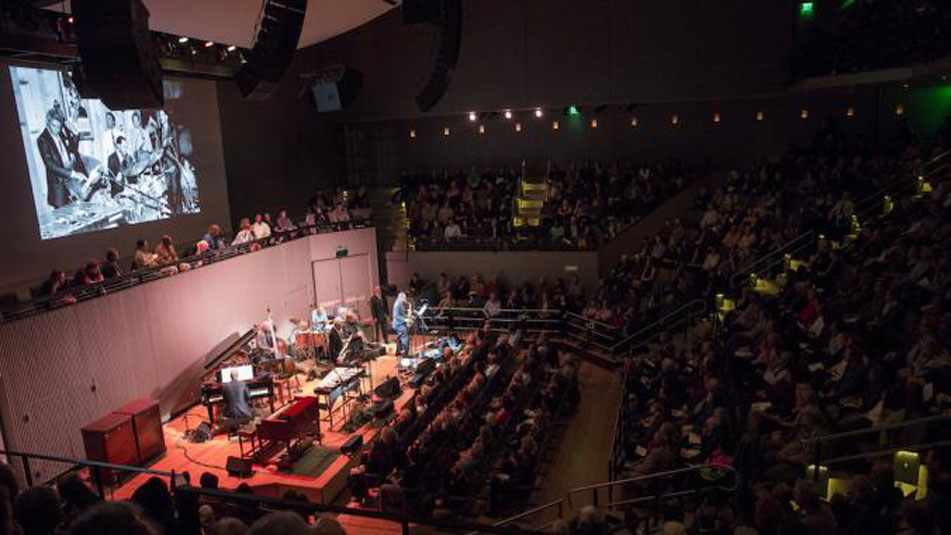 Toward the end of his life, with his health ailing, vibraphonist Bobby Hutcherson could still polish off a phrase with a joyful swipe at the bars, and he could still play a ballad with such poignancy that people would shout. He was all soulful essence. You could see it in his smile and in his eyes; the music reflected the man.

Hutcherson died in August at age 75. But that smile and those eyes – they set the tone for the memorial concert that filled Miner Auditorium on October 23, as 30 musicians performed in tribute to the vibraphonist. It was a helluva lineup: the SFJAZZ Collective (of which Hutcherson was a founding member), as well as pianist McCoy Tyner (Hutcherson’s good friend and musical soul mate), saxophonists John Handy and Gary Bartz, flutist Hubert Laws, organist Joey DeFrancesco, drummers Brian Blade and Peter Erskine -- and that’s leaving out half. And looking down from the big projection screen behind the stage was Hutcherson: that smile, those eyes, in scores of photographs that made this not so much a sad night as a celebration. There was Bobby, all decked out, with his beloved Rosemary on their wedding day. There was Bobby with his children, dressed up as monsters for Halloween. There was Bobby reeling in a big fish; or relaxing on the beach near his house in Montara, 20 miles south of San Francisco; or puttering in his garden, tending to his tulips. And there was Bobby backstage or on the bandstand with Tyner, with Dizzy Gillespie, with Milt Jackson, with Dexter Gordon, who had been a schoolmate of Hutcherson’s big brother Teddy in Los Angeles.

And what about the music? It’s not easy to pull out the high points, but let’s name a few.

Mary Stallings, who knew Hutcherson for 52 years, sang “For All We Know,” somehow making it both sassy and wistful. The words leaped out:

The audience was rapt. Ditto, when DeFrancesco performed – in spite of the static that kept buzzing through his B-3’s amplifier. While a technician scrambled to find the loose cable, DeFrancesco laughed, threw up his hands and looked heavenward. Identifying Hutcherson as the culprit, he shouted, “Hey, Bobby, come on, man!”

Then he ate up “Take the Coltrane” – with super-energy, outlandish virtuosity. He scaled back for "My Foolish Heart," a duet with drummer Billy Hart that found DeFrancesco playing very few notes, squeezing maximum emotional juice out of each one of them. It was a lesson in musical expression. It was, when you think about it, highly reminiscent of Hutcherson, who could play a ballad like no one.

Later, pianist Billy Childs led a primo quartet – with Laws, Erskine and bassist Matt Penman – through a pair of tunes from Hutcherson’s late-‘60s period, when he co-led a band with saxophonist Harold Land. First came Land’s “The Peace-Maker,” and then Hutcherson’s “Herzog.” These were superb performances by Childs and the group: all clarity and spaciousness, with a sense of touch, proportion and unforced yet explosive swing that, again, was reminiscent of Hutcherson.

Next, out came the vibraphonist’s son, drummer Barry Hutcherson. He looked at Rosemary, seated near the stage, and told her that this night of music was “dad thanking you for giving him such a wonderful life.” And then he and the band – Hutcherson’s final West Coast group, with Roger Glenn filling in on vibes – played “There Will Never Be Another You.”

If you were there, you know that the concert ended with a video of Hutcherson at home, near the end, playing “I’ll Be Seeing You,” sketching the melody with four mallets, letting the phrases hang in the air, and then singing the words: “I'll find you in the morning sun, and when the night is new…”

He’s gone – but that wasn’t the night’s message. Hutcherson’s essence has become part of the jazz landscape; you could hear that truth all night, whenever vibraphonist Warren Wolf played. He’s 36 years old, the latest vibraphonist with the SFJAZZ Collective, and there’s a shimmer and glow to his sound, a focus and flow to his lines – kind of Bobby-like.