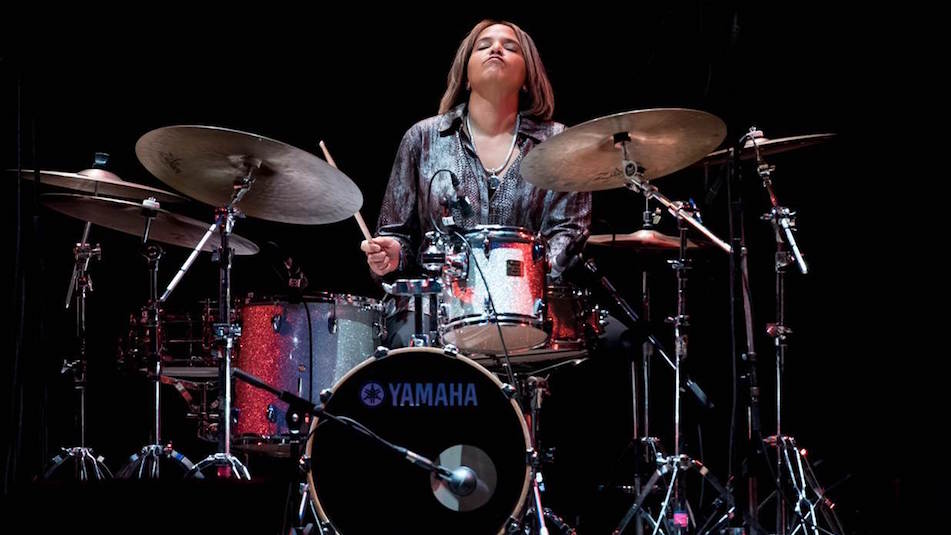 A musical force of nature, Terri Lyne Carrington is one of the great living drumset masters who has transcended her prodigious beginnings — receiving a full scholarship to Boston’s Berklee College of Music at age 11 — to become a highly respected bandleader, an in-demand producer, an invaluable rhythm section player, and a three-time GRAMMY Award winner.
On the heels of her role as Music Director for the NEA Jazz Masters Tribute Concert last month, she returns for this week's Fridays at Five streaming concert with the Wayne Shorter Quartet, the fifth installment of our Wayne Shorter Celebration, filmed in April 2017. Though she is standing for Brian Blade for this concert, Carrrington is hardly new to the saxophone legend. Her lengthy history with Shorter is but one of her innumerable musical partnerships as one of jazz's most in-demand collaborators, and here are several of the drummer, composer and multi-instrumentalist’s greatest pairings.

Carrington was an integral part of the jazz legend’s ensembles from 1997-2007, touring the world in both acoustic and electric settings and appearing on Hancock’s lushly arranged 1998 Gershwin centennial project Gershwin’s World as well as his 2001 global electronica release Future 2 Future. Carrington’s work with Hancock was beautifully captured in a 2000 performance recorded for the now defunct BET on Jazz cable network, with a sextet including trumpeter Eddie Henderson, bassist Ira Coleman, saxophonist Eli Degibri, and percussionist Cyro Baptista.

Beginning with 1988’s Joy Rider, Carrington anchored the bands of saxophone genius Wayne Shorter during a period of great transition in the master’s music, from the electronics-heavy fusion of his Weather Report years to the exploratory acoustic settings that have defined his most current work. Carrington’s kinetic power behind the kit was a highlight of Shorter’s funk-heavy 1995 Verve debut High Life, and reached a zenith with 2003’s all-acoustic Alegría, on which the leader employs both his then newly minted quartet including Danilo Pérez, John Patitucci, and Brian Blade, along with an extended ensemble featuring Carrington, pianist Brad Mehldau, percussionist Alex Acuña, and wind/brass section. Shorter’s appearance at SFJAZZ in April 2017 featured his working quartet, with Carrington back in the fold in place of Blade.

The matchup of Carrington with superstar bassist, singer, and composer Esperanza Spalding nearly seems like a preordained one, with both artists possessing preternatural gifts for invention, experience rooted in soul and jazz, and similarly prodigious musical aptitude. First encountering each other at Berklee, the bassist and drummer have performed as part of each other’s projects – Spalding on Carrington’s 2011 GRAMMY-winning Mosaic Project, and Carrington on both Spalding’s 2010 opus Chamber Music Society and its companion piece, 2012’s Radio Music Society. Most recently, Carrington and Spalding worked together with the late piano genius Geri Allen in the ACS Trio – a project largely devoted to the work of Wayne Shorter that featuring compositions from all members. Spalding and Carrington have continued to perform together in tribute to Allen with guest musicians standing in for the late pianist.

Carrington’s association with jazz greatest living vocalist goes back nearly three decades, showcasing the drummer’s matchless versatility and deep connection to song interpretation. She appeared on six of Reeves’ albums including I Remember (1991), Art & Survival (1993), Quiet After the Storm (1994), That Day (1997), Music For Lovers (2007), and Beautiful Life (2014). Reeves contributed to Carrington’s GRAMMY winner Mosaic Project, and the pair traveled the world together part of Sing the Truth tour with Lizz Wright and Angelique Kidjo.