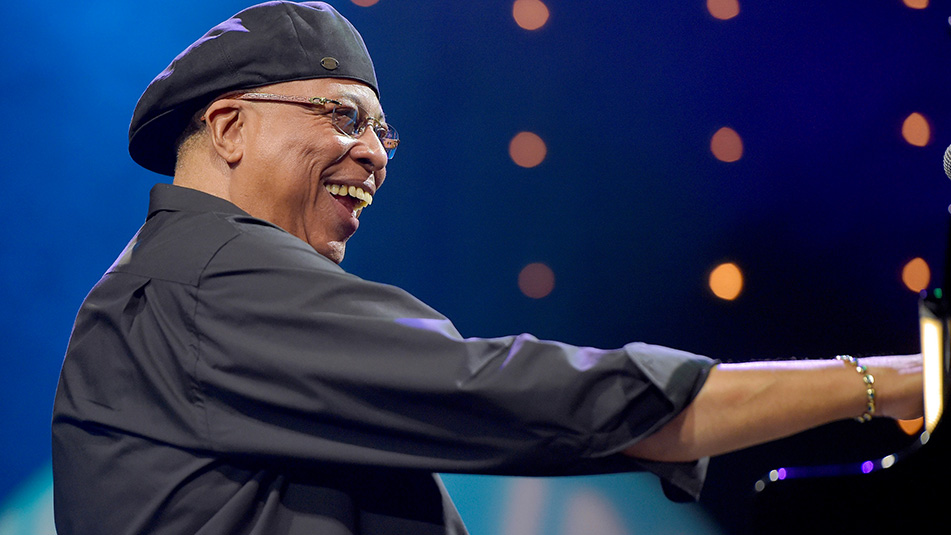 Growing up in Havana, Chucho Valdés was the heir apparent.

His father was Bebo Valdés, the celebrated pianist and bandleader. Family friends included Ernesto Lecuona, the composer and pianist whose admirers included Maurice Ravel and George Gershwin. It didn’t take long for Chucho’s talents to emerge. He enrolled in conservatory at age nine and took over the house band at the legendary Tropicana Club at age 19. In 1973, a decade after the British Invasion of the U.S. music scene, Valdes – then in his early 30s – signaled the Cuban Invasion by founding the band known as Irakere. It reshaped Afro-Cuban music and soon blew open the doors to the American market.

At SFJAZZ, the next 12 months would seem to be the Year of Chucho Valdés. On August 2-5, 2018 he performed in a duo with pianist Gonzalo Rubalcaba. On January 31, 2019 at SFJAZZ’s annual Gala, he will receive the organization’s Lifetime Achievement Award and open his own four-night residency, featuring Irakere 45, the band’s latest edition. On March 16, he will return to perform in another duo, this time with saxophonist Joe Lovano.

We spoke to Valdés, 76, about the year ahead – and about his new book, titled “Decoding Afro-Cuban Jazz: The music of Chucho Valdés & Irakere,” co-authored with pianist Rebeca Mauleón, a good friend who also happens to be SFJAZZ’s Director of Education.

(Note: Valdés’s answers have been translated from Spanish.)

Q: You descend from a lineage of Cuban pianists. Where does Gonzalo Rubalcaba stand in the Cuban piano tradition?

A: Gonzalo is one of the greatest Cuban pianists of all time, and one of the most musically complete. I have known him since he was a child and observed his remarkable development over the years. I admire his pianistic rigor; he is not only a versatile composer, but a great performer. I think our collaboration has been a wonderful learning experience for me; it is a fantastic collaboration.

Q: Looking back across the decades, what is the influence of Irakere? I’m talking about the original edition of the band.

A: Irakere’s influence can still be found in today’s emerging young bands; our message was that it was perfectly compatible to fuse traditional African-derived folk music with jazz and electronic instruments in order to bring a more contemporary sound to Afro-Cuban rhythms. To be more precise, our message was to explore and to evolve… The group opened new musical horizons within Cuban dance music and also forged a new path in the history of Afro-Cuban jazz.

Q: Can you give some specifics? Maybe you can describe the band’s rhythmic innovations.

A: Irakere’s approach was a deep immersion into Afro-Cuban roots music, incorporating traditional folkloric instruments and rhythms into popular dance music, and also creating a new hybrid style we refer to as “batumbatá,” where we used five conga drums played alongside a cowbell to create a “base” rhythm. This represented the beginnings of the contemporary “timba” aesthetic, marked by compositions such as “Bacalao Con Pan,” which became emblematic of the timba genre, and a turning point in how future groups in Cuba would approach this way of playing.

Irakere was also the first Cuban group to perform at the Newport Jazz Festival and to be signed to an American record label (Columbia Records), thanks to the advocacy of (the label’s late president) Bruce Lundvall, whose interest in the band’s singular qualities led to unprecedented opportunities. We were also the first Cuban band to win a GRAMMY Award.

Q: How do you assess Irakere 45, your latest edition of the band?

A: For me it was very important to see how this new generation might be able to interpret or approach Irakere’s music from their own point of view; this was the main reason why I chose not to use any of the founding members of the band in this new version. This has been very interesting and very surprising, after four and a half decades, to see how these young players have brought new and fresh ideas to an established project, primarily within the percussion elements, where these concepts have been the most developed. The horn players were provided with the original arrangements and they have done a great job with them, perhaps with a slightly different and more contemporary phrasing, but the main difference has been their improvisational approach. Honestly, there will never be another Irakere like that first version, but we need to realize that nothing is frozen in time; these young players have given a fresh new sound to the original sonority.

Q: Why did you choose Rebeca Mauleón to co-author your new book?

A: Rebeca Mauleón is one of the people who best understand Afro-Cuban music, as well as being a great pianist and composer. She knows the theory as well as the performance practice of these genres, one hundred percent. She has been indispensable in this project. My admiration for her goes back many years before this work, and I am grateful to her. Thank you, Rebeca.