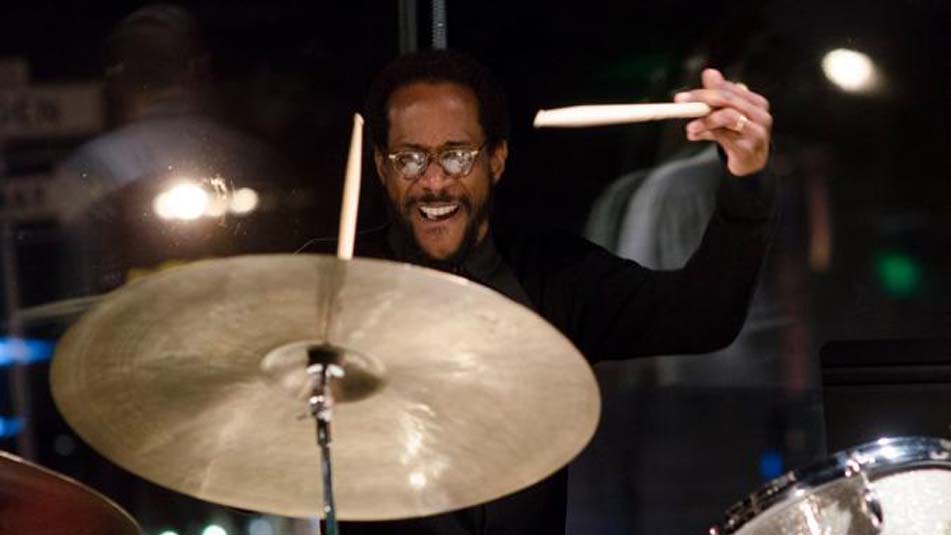 This week's Fridays at Five as part of the Virtual San Francisco Jazz Festival features a June 2016 performance by drummer Brian Blade with his Fellowship Band, making their Miner Auditorium debut. In preparation, we go back to the archives for this story tracing his history of collaboration.

With his unfailing ability to raise the level of the music and musicians around him, drummer Brian Blade is one of the most treasured collaborators in jazz. A founding member of the SFJAZZ Collective in 2004, leader of the Brian Blade Fellowship, and charter member of the Wayne Shorter Quartet, he has amassed a staggering list of credits as a session and touring player for the likes of Norah Jones, Brad Mehldau, Charlie Haden, Bob Dylan, Kenny Barron, SFJAZZ Collective pianist Edward Simon, Wolfgang Muthspiel, and dozens of others. Additionally, the Shreveport, Louisiana native has had long-term associations with a number of artists from the worlds of both jazz and pop. Here's a look at several of his most notable partnerships:

Blade’s first real exposure to an international audience was as part of saxophonist Kenny Garrett’s early 90s bands, making his recorded debut on Garrett’s 1992 Atlantic release Black Hope. Blade appeared on Garrett’s sessions Triology and Pursuance: The Music of John Coltrane in the mid-90s and returned for the saxophonist’s expansive, GRAMMY-nominated 2006 Nonesuch album Beyond the Wall. Here’s an explosive 21-year-old Blade in 1991 with Garrett’s quartet at the Blue Note in Tokyo along with pianist Junko Onishi and future Brian Blade Fellowship bassist Chris Thomas:

One of Blade’s most enduring partnerships has been with Bay Area-born saxophone giant Joshua Redman, a multi-faceted collaboration that cemented Blade’s reputation as a world-class artist. Beginning with the 1994 effort MoodSwing, featuring a monstrous quartet including Brad Mehldau and Christian McBride, Blade provided the backbone for nearly a dozen of Redman’s exploratory albums in settings including his working quartet, the funk-infused Elastic Band, and the collective trio Yaya3 with organist Sam Yahel. Blade reunited with Redman in the 2016-17 Season and 2018-19 Season with his Still Dreaming project in tribute to the Ornette Coleman alumni band Old and New Dreams. In this clip, Blade performs the tune “Jazz Crimes” with Redman’s Elastic trio:

One of the first artists to resonate deeply for Blade after the gospel he absorbed as a youth, Joni Mitchell employed Blade’s deep grooves and sympathetic accompaniment on albums from the 1990s forward, including 1998’s landmark Taming the Tiger and 2002’s Travelogue. Blade participated in most of Mitchell’s live performances from the period, and served as musical director for SFJAZZ’s Gala Tribute to Mitchell in 2015. In this video Blade appears in duet with Mitchell on the Tonight Show in 1995, performing “Love Puts on a New Face,” a song that would later be recorded for Taming the Tiger.

Best known as a GRAMMY-winning producer of blockbuster albums by U2, Bob Dylan, Peter Gabriel, Willie Nelson, Emmylou Harris, and Neil Young, Lanois is also an accomplished composer, guitarist, and vocalist. Blade has participated in most of Lanois’ projects as a solo artist, including his score to Billy Bob Thornton’s breakout film Sling Blade and his recent rock/blues project Black Dub. Here Blade performs the song “Fire” with Lanois to celebrate his induction into the Canadian Music Hall of Fame.

Easily the most prominent collaboration of Blade’s career has been his role as part of saxophone legend Wayne Shorter’s telepathic working quartet with pianist Danilo Perez and bassist John Patitucci – a partnership Blade has maintained since 2000. A relentless performance schedule and four spectacular recordings including the GRAMMY-winning 2013 Blue Note release Without a Net and 2018's expansive Emanon have reinforced the band’s distinction as arguably the greatest small group in jazz. The quartet minus Shorter has also recorded and performed an active trio under the name Children of the Light. This clip features the quartet in full flight at a performance in Bonn, Germany:

Begun in 2010, one of Blade’s newest affiliations is also one of his most visible, as part of the all-star trio led by piano genius Chick Corea featuring bassist and former SFJAZZ Resident Artistic Director Christian McBride. Their blockbuster 3-CD Concord release Trilogy was recorded live in the U.S., Europe, and Japan, and won the 2014 GRAMMY for Best Jazz Instrumental Album. Blade performed with Corea and bass legend Eddie Gomez during Season 5 in a tribute to the great Bill Evans, revisiting material from Corea’s 2012 album Further Explorations—a session featuring Evans trio members Gomez and the late Paul Motian. Here's Corea’s trio with McBride and Blade, performing "500 Miles High" from Trilogy 2: